Why Trump Should Woo India 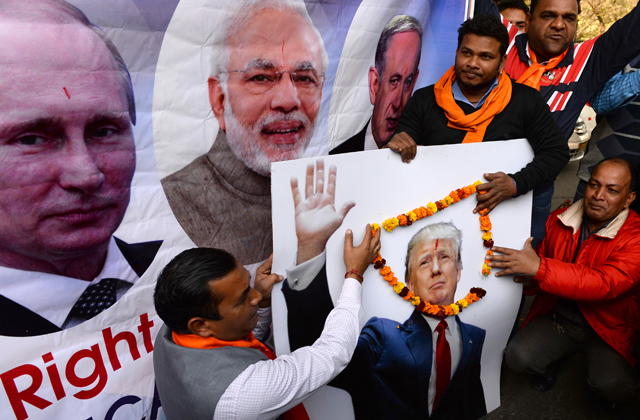 Last week, President Trump kicked off his first trip abroad with visits to Saudi Arabia, Israel, and the Palestinian Territories, signifying the importance that he places on the Middle East. This engagement followed a summit meeting with Chinese President Xi Jinping, with whom Trump emphasized his admiration for, in April. Also that month, Vice President Mike Pence visited the Asia-Pacific region in a tour intended to reassure countries like South Korea, Japan, Indonesia, and Australia that the U.S. still stood beside them.

But one critical nation has been missing from the Trump administration’s Asian charm offensive: India. Since the president’s inauguration in January, no U.S. cabinet-level official has touched down in Delhi to start the process of guiding the crucial U.S.-India relationship.

Fortuitously, this period of neglect is about to end: In June, Indian Prime Minister Narendra Modi is reportedly scheduled to visit the United States. President Trump should use the occasion to signal to India that his administration is eager to make a major push in strengthening U.S.-India ties.

Bolstering ties with India would be advantageous for several reasons. First, as a fellow democracy and an emerging global power and economy, India represents significant opportunities for the United States. Next, India can be a critical partner in both the fight against terrorism and in navigating the complex geopolitics of the Asia-Pacific region. Lastly, in Prime Minister Modi, President Trump has a counterpart prepared to make compromises to take the relationship to the next level.

As an ascendant power within Asia and around the world, India is positioned to be a critical long-term partner for the United States. Today, it is the world’s fastest growing major economy with a rapidly expanding market and labor force that will be a critical engine of global growth. India is also a nuclear power, has the world’s third-largest military, is boosting its naval capabilities, and has become the biggest purchaser of international arms.

Indian leaders have extended their sights beyond South Asia to play a greater role in global development and governance. Delhi has developed friendly ties with critical countries around the world and increased its engagement with multilateral forums and groupings, partnering in initiatives likes the BRICS New Development Bank. Once a big recipient of foreign aid, India has become a donor nation, a welcome sight for a U.S. administration seeking greater burden-sharing by others.

Second, India is a natural partner for the United States in two of its core security challenges — countering terrorism and managing a peaceful Asia-Pacific region.

In Saudi Arabia, President Trump called for “a coalition of nations who share the aim of stamping out extremism.” Long a victim of terrorism itself, India has extensive experience in fighting radicalization. India has cracked down on terrorism but, except for in Kashmir, has done so without alienating its Muslim population (the second-largest in the world) and while maintaining friendly ties with countries across the Muslim world. U.S.-India counter-terrorism cooperation has been a critical component of the bilateral relationship and both countries are working to help Afghanistan in this area. If President Trump is looking for countries to join his “coalition,” he could benefit from looking to and learning from India.

India is an equally appealing partner in the Asia-Pacific, where it can play a positive role in managing stability, enhancing prosperity, and serving as a successful model for democratic development. India has started to echo Washington’s concerns about maritime disputes in the South China Sea and the need to sustain a rules-based regional order. Delhi’s growing engagement with the region’s institutions is also a welcome development. By supporting India’s inclusion in the Asia-Pacific Economic Cooperation (APEC) forum, the United States can fill out India’s East Asia institutional resume, which already includes ASEAN, the East Asia Summit, and the Shanghai Cooperation Organization.

Even as India has stood up to China, it has managed a collaborative relationship with Beijing in certain areas, showing how a peaceful relationship can be sustained despite lingering mistrust and a border dispute. Above all, by signing a Logistics Exchange Memorandum in 2016, which the U.S. long sought, India signaled its intention to enhance military cooperation with the U.S. in the Indian and Pacific Oceans.

Finally, Delhi is also eager to strengthen bilateral ties. As one of the few countries spared Trump’s criticism during the presidential campaign, India remains cautiously optimistic about working with the Trump Administration — a trait not shared wholeheartedly by some U.S. partners in Asia. Though Delhi is concerned about President Trump’s immigration policies and American companies remain skeptical of India’s position on trade and intellectual property rights, areas of mutual interest dwarf areas of potential disagreement.

In Modi, Trump has a reliable partner who has already tilted India closer to the United States than any previous Indian leader. Modi, who shares Trump’s pro-business and nationalist inclinations, enjoys robust political standing after recent victories in state elections and is positioned to win a second term in 2019. This is fortunate because his vision for India aligns well with U.S. interests. Modi's economic reforms have eased restrictions on foreign investment and made way for a national market through a Goods and Services Tax. And his Act East policy aligns well with U.S. interests in the Asia-Pacific.

The timing is right for the Trump administration to elevate the relationship with India and forward U.S.-India ties. The challenge will be dedicating the requisite diplomatic time and attention in the midst of the challenges confronting the administration. If Modi visits the United States in June, it will be the perfect opportunity to send a signal that the United States is committed.