Why the Rise of Robots Will Hit Developing Countries Hardest 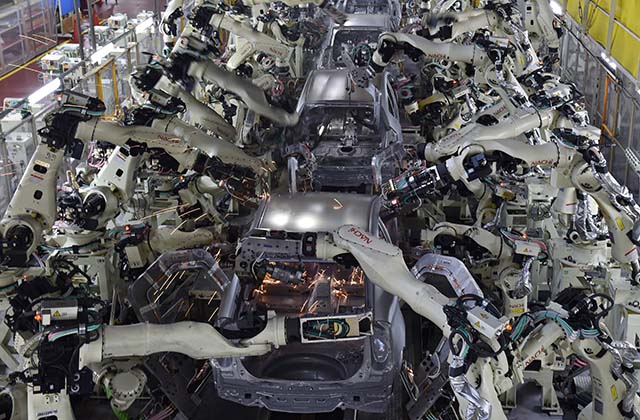 During his presidential campaign, Donald Trump ran on a platform of economic nationalism that promised to get tough on countries like China and Mexico whom he accused of stealing American jobs. The message resonated with Rust Belt regions that have been hemorrhaging manufacturing jobs for years. Trump flipped once reliably Democratic districts in Michigan, Wisconsin, Ohio, West Virginia, and Pennsylvania to win those states, and thus the presidency.

In spite of the anti-globalization rhetoric, however, offshoring isn’t the main culprit for the decline. A 2015 Ball State analysis found that 87 percent of American manufacturing job losses over the preceding decade could be attributed to automation and productivity gains, leaving trade responsible for as much as 13 percent.

But for all the employment disruption caused thus far by technological advances, the situation, and its political side effects, is likely to become much more serious in coming years. And, contrary to the gloomy message promoted by President Trump, the United States is actually in a far more enviable position than much of the world.

“In the third world, say Egypt or India, the manufacturing jobs that would ultimately employ tens of millions who are unemployed — those jobs don't exist,” said Princeton Professor of Near Eastern Studies Bernard Haykel while speaking at Asia Society’s Lahore Literary Festival in New York in May. “Autocrats and populists are making all kinds of promises, but those jobs will never come, which means we're looking at further radicalization, further disenfranchisement.”

An analysis by the Boston Consulting Group concluded that accelerating technological advances will result in the share of tasks performed by robots rising from a global average of around 10 percent across all manufacturing industries in 2015 to 25 percent by 2025. Furthermore, robotics and artificial intelligence (AI) advances may also render obsolete a wide array of service industry jobs, from cashiers to drivers, and even some jobs in white-collar industries like journalism.

“Automation is having a global impact, but it will manifest differently in different regions and countries,” says Martin Ford, author of the book Rise of the Robots: Technology and the Threat of a Jobless Future. “In developed countries, manufacturing is a relatively small share of employment. So the biggest impact is going to come from AI and robotics in the service sector and in white collar jobs. In the developing countries, factory robots will have a huge impact.”

Traditionally, Ford says, high-income countries like the U.S. and most of Western Europe built a middle class on the back of low-skill, low-wage manufacturing. Then, as wages rose and workforces became more skilled, these countries transitioned to more service-oriented economies powered by domestic consumption — a process later replicated in the East Asian economies of Japan, South Korea, and Taiwan.

China, which has enjoyed decades of rapid growth through what has been the largest-scale industrialization in human history, is now similarly experiencing rising wages — and is recognizing the need to shift to a more service-focused economy. But the global economic circumstances are not the same. “China is faced with making this transition in the robotic age,” Ford said. “Which means that factory jobs will disappear at a potentially unprecedented rate, even as robots and AI also invade the service sector and white-collar occupations that would historically have absorbed the displaced manufacturing jobs.”

The challenge will be even greater for countries that have yet to establish a substantial manufacturing sector. Many regions are already showing signs of what’s known as “premature deindustrialization” — reaching peak manufacturing activity at relatively low employment and income levels compared to the early industrializers, followed by a shrinking of manufacturing’s share of the economy.

A 2015 paper by Princeton economist Dani Rodrik found that Western European countries like Britain, Sweden, and Italy reached peak industrialization at income levels of around $14,000 per capita (in 1990 dollars), whereas India and many sub‐Saharan African countries appear to have already reached their peak manufacturing employment with income levels of around $700. The paper indicated that this trend has been worsening for years. Overall, countries that reached peak manufacturing employment before 1990 did so with income levels three times as high as those countries that reached their peak after 1990.

“Deindustrialization removes the main channel through which rapid growth has taken place in the past,” the paper said. “On the political front, premature deindustrialization makes democratization less likely and more fragile.”

Rodrik noted that industrialization was critical to developing modern democratic states in Europe and the United States. It facilitated “class-based solidarity” and the rise of labor-based political movements — like trade unions and political parties — that enabled “discipline, organization, and convergence around a common list of political demands,” and thus, was conducive to stable and inclusive political development.

Complicating matters further still for developing countries is demographics. One of the factors that fueled the series of revolutions across the Middle East in 2011 known as the Arab Spring was the “bulge” of unemployed youth. Several of the Arab Spring countries have become even more unstable and authoritarian than they were before 2011, and radical movements like the Islamic State have gained influence. There are few signs of substantial economic respite in the long term, as the region has little promise of establishing a competitive manufacturing base.

“Those jobs have already been taken by the Far East and are being phased out in the Far East,” Haykel said. “In any case, Egypt will never be able to compete with the Chinese when it comes to manufacturing; and automation is coming. So what happens to this huge swath of the world from Morocco through Pakistan where jobs are not coming?”

Some solutions to the problem have been proposed, including investing more in education and job training, taxing robots that replace humans, and providing a universal basic income for all people, regardless of job status — but these would all prove much more difficult to implement for developing countries, which have a far smaller economic base per capita to work with than the developed world. “The solutions are not clear,” Ford said. “We will have to begin to think seriously about these issues.”