Wendy Cutler: 'China Is Likely To Fill the Vacuum' From U.S. TPP Exit 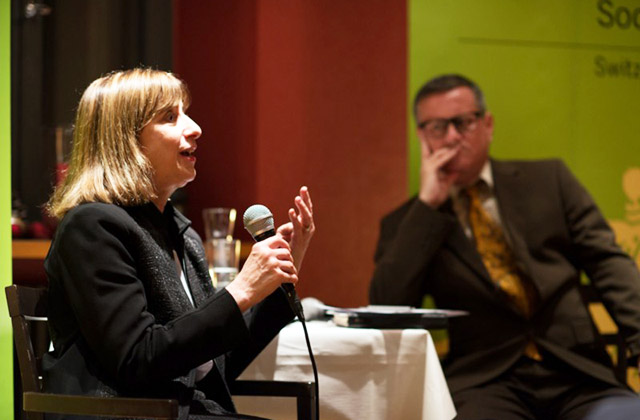 During his presidential campaign, Donald Trump promised to pull the United States out of the Trans-Pacific Partnership (TPP) — a free trade agreement among 12 Pacific Rim countries (but, notably, not China). Abandonment of the agreement was part of a wider populist platform that tapped into economic anxiety and skepticism toward free trade and globalization. With Trump's election last month, the deal looks to be all but dead, which leaves a possible opening for China in the region. Asia Society Policy Institute Vice President Wendy Cutler, who was a leading member of the team negotiating TPP for the U.S., recently discussed the deal's unraveling at an event at Asia Society in Zurich. Below are excerpts from the conversation, which originally appeared at Medium.

You had a key role in negotiating TPP. What would the benefits of this agreement be?

Ratifying the TPP would bring enormous economic and geostrategic benefits, not just to the U.S., but to all TPP partners. The agreement covers 12 countries, which together produce 40 percent of the world’s GDP. What makes TPP different from previous agreements is that it covers all products, even the most sensitive agricultural ones which have typically been excluded from previous agreements.

Furthermore, TPP would also create rules for state-owned enterprises, digital trade, environmental protection, intellectual property, and much more. It has very robust provisions on labor; For example, Vietnam agreed to allow independent unions under the agreement, which is a big policy change. TPP would set a high standard for how trade is done in the 21st century.

President-elect Trump has said repeatedly that he will exit TPP on his first day in office. He claims that he can negotiate much better trade deals. Do you think he can?

I’m the first to admit that TPP isn’t a perfect deal. That’s what happens in a negotiation — it’s give-and-take by definition. But negotiating a free trade agreement is different from negotiating a business deal. If an agreement is negotiated between different countries, each of them has to be able to go home and sell it as a win domestically. And it takes time: TPP took over five years to conclude! I think a lot of our partners are now tired of us, and I’m not sure how open they would be to restart new negotiations.

Trump also said that he’d negotiate bilateral deals instead of plurilateral ones. But global trade doesn’t usually happen just between two countries anymore, and creating a “spaghetti bowl” of different bilateral agreements makes it very complicated for companies to keep up to date with the rules.

TPP would have brought big advances to free trade between Japan and the U.S. How is Japan reacting to the fact that the agreement might not be ratified?

TPP was actually very controversial in Japan and faced a backlash from the agricultural lobby. Prime Minister Shinzo Abe invested a lot of political capital because he wanted to show leadership in the region and boost the Japanese economy. With TPP on the brink, I expect that Japan will try to convince the U.S. and President-elect Trump that it’s in the U.S. interest to ratify. Failing that, they will most likely look to other trading partners, and intensify their participation in the Regional Comprehensive Economic Partnership (RCEP), of which the U.S. is not a part.

With the U.S. likely retreating, is China going to fill the vacuum in trade in the Asia-Pacific region?

A year ago, China — which wasn’t part of the TPP negotiations — was looking at the agreement very closely, and did not appear to be ruling out joining it eventually. Now there is indeed a vacuum, and someone will fill it. The Asian countries want to continue liberalizing. I expect that the RCEP negotiations, which have been going on for a few years, will be intensified now, and possibly concluded in 2017.

The backlash against TPP is part of the increasing skepticism towards trade and globalization in many countries around the world. How can this criticism be addressed?

Both candidates for the U.S. presidency this year were against TPP — that is unprecedented, and I believe that we are going to see a fundamental change in U.S. trade policy as a result of these elections. I understand a lot of the criticism towards globalization, and the effects that it has had. But you can’t address these concerns by not concluding a free-trade agreement. Indeed, an agreement like TPP can help shape globalization in a way that benefits U.S. interests. Ensuring that the positive effects of globalization are felt by all needs first and foremost changes in domestic policy.