Wasserstrom: The Five New China Books I'm Most Excited About in 2013 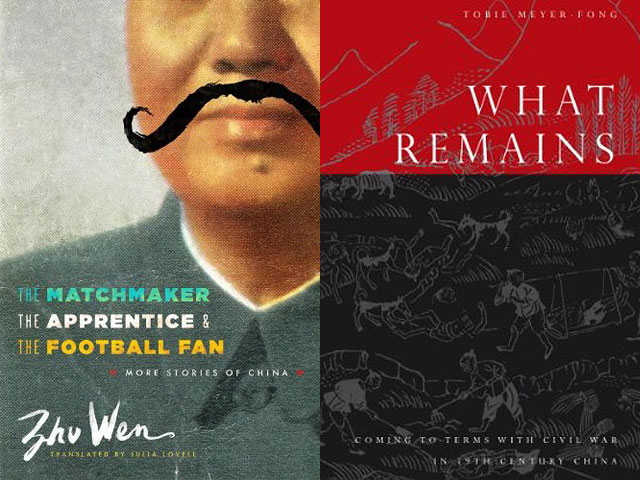 Two of the books Jeffrey Wasserstrom is anticipating in 2013: "The Matchmaker, the Apprentice, and the Football Fan: More Stories of China" by Wen Zhu and "What Remains: Coming to Terms with Civil War in 19th-Century China" by Tobie Meyer-Fong.

My recent email exchange with Ian Johnson on memorable 2012 China books, which ran on this site earlier this week, got me thinking about publications expected out in 2013 for which I have high hopes. The main reason I am looking forward to these particular books is that I've read — and liked — previous things by the authors or editors. In some cases, reading an excerpt or seeing a short standalone piece related to the project has further piqued my interest. On reflection, I’ve realize that most of the 2013 books I have in mind can be linked, either directly or at least loosely, to one or another 2012 title that Ian or I flagged in our back-and-forth. Here they are in no particular order, with those connections noted:

First up is Restless China, an edited volume due out in April from Rowman and Littlefield, which consistently publishes some of the best books on Chinese cultural issues. The trio behind it is the same interdisciplinary team — language and literature specialist Perry Link, historian Paul Pickowicz, and sociologist Richard Madson — who brought us Unofficial China (1990) and Popular China (2002), two previous collections I admire. The tie to Ian and my 2012 list is that Restless China will includes a smart chapter on Han Han, the novelist and blogger whose first English language book, This Generation, was one of Ian's picks. As I mentioned in a piece I wrote for the estimable Words Without Borders website, I was fortunate enough to be able to read and learn from a draft version of that chapter when I was writing my commentaries on the Han Han phenomenon a few months back.

Another 2013 title I'm eager to read is What Remains: Coming to Terms with Civil War in 19th-Century China, which is by cultural historian Tobie Meyer-Fong, author of the excellent Building Culture in Early Qing Yangzhou (2003). Like one of my favorite 2012 China books, Stephen Platt's Autumn in the Heavenly Kingdom, this forthcoming Stanford University Press title deals with the Taiping Uprising, an event that was roughly contemporaneous with but had a much higher death toll than the American Civil War. It comes with an endorsement by Platt, who calls it a work of “pathos and insights” that “resonates deeply not just on an intellectual level but on an emotional one as well.”

A third book due out next year that I'm very exciting about is Michael Meyer’s In Manchuria. This has no direct tie to any work on Ian and my list, but I expect it to have some of the same appeal for me as one of the titles I singled out there as a favorite 2012 work that approached China from the bottom up: Michelle Dammon Loyalka's Eating Bitterness. Meyer, like Loyalka, is a freelance writer with a flair for graceful writing and a fascination with the experiences of ordinary people as opposed to prominent artists, rich entrepreneurs, artists and intellectuals, or members of the political elite. I've been a fan of his since 2008, when I read and reviewed his first book, The Last Days of Old Beijing, for Newsweek. I’ve already enjoyed two teasers from In Manchuria that have run on the Asia Society's ChinaFile site.

A fourth work due out in 2013 that I'm eager to get my hands on, due to both the caliber of the author and the importance of the topic is Howard W. French's much-anticipated book on China and Africa. Expected out in the fall, it will develop themes that French has been exploring for a couple of year now in articles for venues such as The Atlantic. Now at the Columbia School of Journalism, after extended stints covering first Africa and then Japan and finally China for the New York Times, French is the author of a superb book of reportage on Africa, A Continent for the Taking (2005) and just last year had his work as a photographer showcased in a book he collaborated on with the novelist and poet Qiu Xiaolong, Disappearing Shanghai. Here, again, there's no direct tie to any title that Ian and I mentioned, but given the fact French's forthcoming book will be about multiple places and broad political themes, including legacies of imperialism, it might end up having the same sort of appeal as a compelling and thought provoking “China and” book that earned Pankaj Mishra's From the Ruins of Empire a slot on my favorite 2012 readings list.

Finally, a comment on fiction, which I realize Ian and I gave short shrift to in our look back at 2012. I don’t want to end this top five list without bringing in at least one work of literature.

I wish I could say there was a novel dealing with China that was due out in 2013 that I had my eye on, but there isn't. Based on what I've been hearing about it and how engagingly weird its plot sounds, I'm looking forward to reading Yan Lianke's Lenin’s Kisses soon, but that came out in 2012, so it doesn't count. Beyond that, since Penguin China has been bringing out some interesting novels in translations, I'll keep my eye on their list.

There is, though, a collection of short stories due out soon that I'm looking forward to — and not just because of its catchy title: The Matchmaker, the Apprentice and the Football Fan. It's a set of Zhu Wen stories translated by Julia Lovell that's being published by Columbia University Press, the press that brought out I Love Dollars, an earlier collection of short fiction by the same author working with the same translator. That earlier collection was great fun to read, so I'm expecting this one will be, too.