Looking Back at 2012 China Books: A Conversation with Ian Johnson | Asia Society Skip to main content

Looking Back at 2012 China Books: A Conversation with Ian Johnson 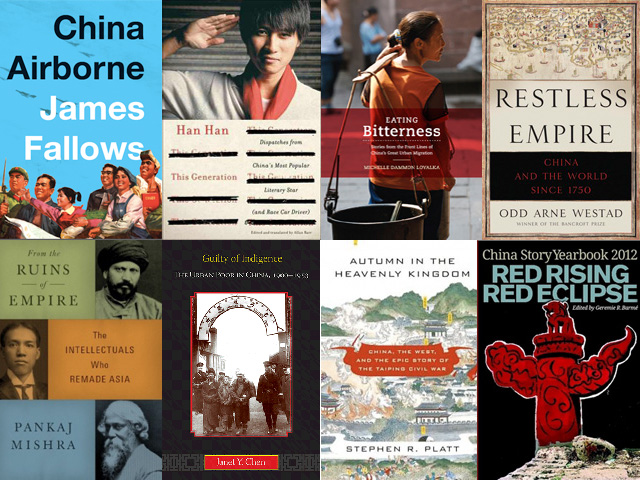 Some of the books on China from 2012 that caught the attention of journalist Ian Johnson and historian Jeffrey Wasserstrom. (Asia Society)

I’m always glad when, through a quirk of fate or an actual plan, I end up in the same time zone as journalist Ian Johnson — something that happened last spring when a trip I took to New York coincided with his appearance at an Asia Society panel, and again this fall when he let me crash in his guestroom when I was passing through Beijing. On these occasions, there are a few subjects that always come up in conversation: the similarities and differences between our professions, what we’ve heard recently from mutual friends and acquaintances, and the bonding experience we had in 2010 when we did a bookstore event together to promote out latest books and no one came, meaning he was only one who bought my China in the 21st Century and I was the only who bought a copy of his A Mosque in Munich.

Last but far from least, we always spend some time comparing notes about the books we’ve been reading and often — since we both do a lot of reviewing — writing about. In light of this, even though we aren’t in the same time zone right now, when I began to make my way through “Book of the Year” lists, I decided to pick up the thread of that particular sporadically ongoing conversation via email. Below are the questions we asked each other and the answers we gave in responding during our long-distance discussion of memorable China reading we’ve done in 2012:

Jeffrey Wasserstrom: In her “Professor who Learns from Peasants,” a profile of James C. Scott (a past Asia Society book prize winner), New York Times critic Jennifer Schuessler said that his latest publication was a mere "skiff" of a book compared to his "usual dreadnought standards." Building on that lovely metaphor, what’s one skiff-like little book and one dreadnought-like tome in this past year's flotilla of China books that you thought particularly good?

Ian Johnson: Let me start with a dreadnought I'm enjoying right now. Restless Empire: China and the World Since 1750 is Odd Arne Westad's sweeping look at 250 years of China's ties to the outside world. It's the kind of book that only an established, experienced historian like Westad can write — he's not only sure-footed in his evaluations but dares to make some pretty big generalizations. One thing that comes through is how China has been more willing than people imagine to improvise and adopt things from abroad. Even though we still talk of "opening up" as a relatively new policy of the past few decades, in fact it's been going on for 170 years.

JW: Well, you’ve just moved Restless Empire a couple of notches up my “need to read in 2013 list,” but my favorite big book is on a topic that I assume Westad deals with at least in passing: the Taiping Uprising. Stephen Platt's Autumn in the Heavenly Kingdom: China, the West, and the Epic Story of the Taiping Civil War offers a splendid narrative of that complex event. In addition, as I stressed in a review I did early this year, the book does an excellent job of placing that mid-nineteenth century Chinese conflict into international context. What about a much shorter work worthy of attention?

IJ: In terms of a skiff, I enjoyed Han Han's This Generation. I wrote in a review that Han Han is sometimes a bit disappointing but overall it's a good read and he's an important person. You might have a different take than my somewhat equivocal endorsement, perhaps?

JW: I’m glad to hear you pick that, as I gave it an even warmer review than you did, but it wasn’t the skiff I was thinking of when I posed the question. That honor goes to a book in the Oxford University Press VSI series I’ve become hopelessly addicted to over the years: Richard C. Kraus’s The Cultural Revolution: A Very Short Introduction. It’s just 152 pages, small enough to slip in your back pocket, and written by a political scientist who knows the complex event in question through and through, and does a nice job of, among other things, dealing with the strange shadows it continues to cast on contemporary Chinese politics. Kraus is also a very witty writer, something that can’t be said — no offense meant to all my political scientist friends out there — for a great many members of his discipline.

IJ: Now it's my turn to frame the issue. Do you have a favorite top-down China book (that helps us make sense of what's going on among the elite) and a favorite bottom-up one (that sheds light on the lives of ordinary people)?

JW: Well, it isn't just about elite politics, but the book I read that was most helpful to me for thinking through struggles at the top was Red Rising, Red Eclipse, which was edited by Geremie Barmé and came out mid-year as the first annual publication of "The China Story" project of Australia National University. It's got very astute things to say about factional divides, how to make sense of Bo Xilai's fall, and topics like that. As for a bottom-up work, I was very taken with Michelle Dammon Loyalka's Eating Bitterness, an elegantly crafted set of profiles of migrant workers in the city of Xi'an, a city best known globally for its terra cotta soldiers — though she's doubtful any of the people she interviewed for the book has ever seen the venue where those ancient life-sized figurines are displayed. I would have really enjoyed reviewing that book, but I couldn’t — since I wrote a blurb to go on its back cover.

IJ: I liked both those books but for a look at elite politics I'd recommend John Garnaut's dissection of the Bo Xilai fall. As I wrote in a review, it's an instant book but it's by far the most complete and measured explanation of how Bo fell and what it means. I thought it made the best choices in terms of plausible scenarios for how Bo fell. Given that we don't have all the information yet, it's the best account out there. In terms of a bottom-up book, China Airborne by James Fallows uses the country's aviation industry as a microcosm for much-needed reforms in education and politics, not to mention economics and business.

JW: I’ve got one final wild-card question to ask. First, though, I want to cheat a bit and slip in plugs for two more bottom-up 2012 books that I admire but couldn’t review. One is Janet Chen’s meticulously researched and nicely crafted Guilty of Indigence: The Urban Poor in China, 1900-1953, which, like Eating Bitterness, came out with praise from me on its cover. The other is Elizabeth Perry’s creatively structured and powerfully argued Anyuan: Mining China’s Revolutionary Tradition, which I couldn’t review because I’m an editor of the series in which it appeared. Now, that last question: Is there a book you read this year that you particularly liked that doesn’t fit into any of the categories addressed so far and might not even have come out in 2012 or be just about China?

IJ: I've really learned a lot from Daniel H. Bays' A New History of Christianity in China, which came out in 2011. Bays is one of the leading scholars in the field and gives us an accessible, compact book of just 250 pages. What really struck me was how Christianity — which is now probably China's fastest-growing religion — almost didn't make it. There was such resistance to localizing the clergy that by the time the Communists took over in 1949 and expelled the thousands of missionaries in China, the religion was quite fragile. In fact, many Westerners assumed that Christianity wouldn't survive and had been soley a product of colonialism. But thanks to a rise in local Christian leaders in the '20s and '30s, something did survive and today is exploding in numbers. This is a riveting history and Bays tells it fairly and evenly.

JW: My wild-card selection is my friend Pankaj Mishra’s From the Ruins of Empire: The Intellectuals Who Remade Asia. It’s a very special book, which is stylishly written, thought-provoking and draws a series of interesting connections between the work of Chinese thinkers and their counterparts in India and the Middle East. I’ve also got another less high-minded reason to want to give it a plug here, which goes back to Jennifer Schuessler. A few months before she profiled James Scott, she wrote a similar article focusing on Mishra. The most memorable line in it, though, didn’t involve a metaphor linking books to ships, but a reference to Mishra’s “flair for the grace note” being “matched by a sometimes ferocious instinct for the jugular.” Now, so far, I’ve been lucky enough to never write anything that has inspired one of his sharp critical jabs. But I figure you can never be too careful. He’s not the type who would completely pull his punches if a friend wrote something he disagreed with strongly. If I ever set him off, though, remembering that I gave him this shout-out might at least lead him to aim somewhere unlikely to draw much blood.