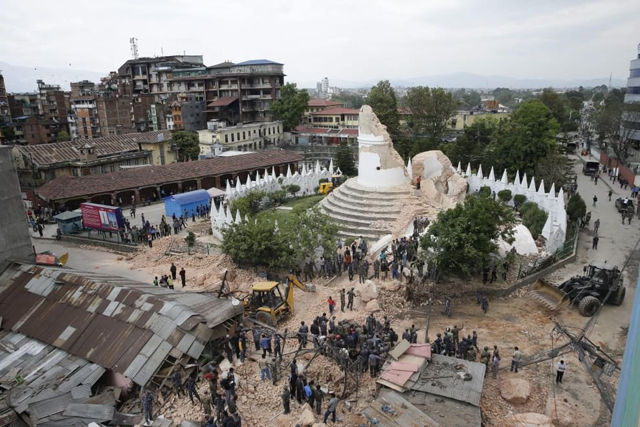 On April 25, a 7.8-magnitude earthquake struck Kathmandu, Nepal, killing over 9,000 people and injuring 21,000 more. In addition to tearing down basic infrastructure across a wide swathe of the country, the tremor also damaged several cultural heritage sites under protection by UNESCO.

In the months since, Nepal, one of Asia's poorest countries, has struggled to rebuild. Amitabh Joshi, a Nepali filmmaker now based in New York, traveled back to his home country to profile men and women who, despite the enormity of the challenge, are slowly restoring Nepal's invaluable heritage. Joshi's two short documentaries are embedded below.

Why did the tragedy in Nepal motivate you to travel back there? How did you decide to tell the story of Kathmandu’s artisans?

Once the earthquake hit on April 25, it was very important for me to travel back to Nepal on a personal level. Like many other Nepalese who assembled online campaigns or volunteered their skills, I knew I had to do something. I felt that it was important to document the process of reconstructing these important cultural heritage sites. After I started filming and speaking to the organizers and artisans involved in reconstruction, it became apparent this was an important story to cover. Anil Chitrakar, who is profiled in the short video, spearheaded a section of the reconstruction work on Swayambhunath Stupa. He had the connections within the Newar artisan community to assemble the appropriate team. These artisan families have lineages that reach back hundreds of years.

We also interviewed Amit Buddhacharya of Swayambhunath Stupa, who is responsible for the upkeep and security of the entire site. His family has had the sole responsibility of protecting the site for thousands of years. It’s important to highlight the artisans that have been working at this very local level. There are larger organizations such as the Department of Archeology and the United Nations organizations UNESCO that are also present at these sites. Amit’s family and painters are working with UNESCO to recover an old mural in a building on the north side of Swayambhunath Stupa. Christian Manhart, the UNESCO representative, said that recovery couldn’t happen without the local support.

Both videos profile artists and workers who talk about the earthquakes being a historically recurring aspect in Nepali life. Are they confident that the government can minimize the effects of the next one?

The last great earthquake took place in 1934. My grandfather was six years old when it occurred. The vast majority of people who lived through that earthquake are not alive today and the ones who remember it were very young. All Nepalese were aware of the potential for a large earthquake. It’s something that is part of the society, and everyone had this expectation. Most of the artisans were skeptical of the government’s role in reconstructing and developing earthquake resistant structures. In fact, the majority of the artisans we interviewed believe that the older structures are actually more earthquake resistant than the concrete buildings. Alok Tuladhar, a local from Kathmandu Durbar Square, told me how the wooden beams within the brick buildings allow for a level of flexibility in the construction. There are other details of how the beams join at the corners of the building, which allow room for shifting. Many of the structures that collapsed had not been renovated in hundreds of years. There have been many private organizations and NGOs that have helped in disseminating information about more earthquake resistant structures for villagers. It will be interesting to see the decisions that are made in reconstructing these cultural heritage sites.

Since shortly after the earthquake, Western media attention has waned. How is the recovery process going?

The Department of Archeology and other governing bodies of the seven cultural heritage sites have made it a point to open these sites to the public and tourists. These cultural heritage sites within Kathmandu attract thousands of tourists each year. Tourism is the second largest source of foreign income, accounting for about eight percent of the nation’s GDP. The lack of tourists will also have social ramifications. Local initiatives include the artisans and the site caretakers of these temples and structures.

But there is also division between the local initiatives and the large organizations from the UN and the Department of Archeology. There seems to be a need for a more concerted effort, in which local voices are heard. Many old sites that aren’t part of the traditional seven heritage sites might fall through the cracks and will not receive the attention needed and the locals are left to secure and reconstruct. It’s important to remember these are living cultural heritage sites important to the local communities. It’s amazing to see the amount of resolve and conviction these local artisans and neighbors have for these cultural heritage sites.