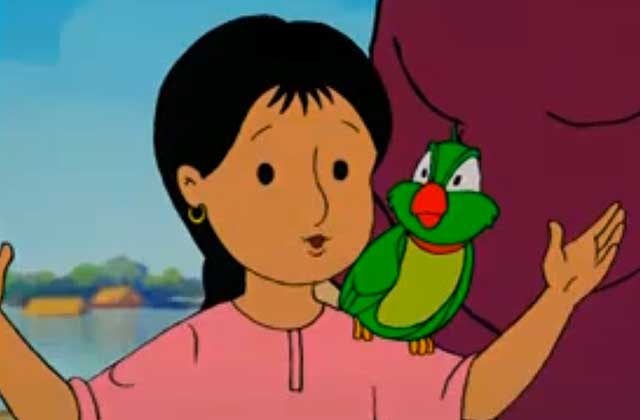 UNICEF launched its annual Child Rights Week this week in Bangladesh. The program is a part of an ongoing grass-roots initiative to educate children and their families about urgent social and public health concerns that range from neonatal health, nutrition, and early childhood education to the practices of dowry and child marriages.

In a country where the literacy rate is still a struggling 53 percent, and the average age that a child drops out of school is 8 years old, mass media as an instructive tool is vitally important. The cartoon heroine Meena, an Indian girl around the age of 10 who lives in a rural village with her family, is the stand-in for a multitude of girls and boys across the subcontinent facing the same issues highlighted by UNICEF — issues which Meena routinely dramatizes on her show.

"Meena is now a daughter not only of Bangladesh but the whole of South Asia," said the UNICEF representative to Bangladesh, Pascal Villeneuve, in a statement on July 27. "She talks about issues affecting girl children in particular, such as education, early marriage, and unequal distribution of household chores."

Since 2010, Meena has played over television and radio airwaves all across India. The episodes have been translated into a variety of languages ranging from Hindi and Urdu to Bengali, Malayalam, and Tamil, and Meena has become a symbol for girls' and children's rights.

Created by communications expert Neill McKee during his time with UNICEF in the 1990s, Meena was an effective way to promote activism at the most fundamental level. "Meena is a part of an education-entertainment strategy that engages the hearts and minds of people of all ages," McKee wrote in a 2003 essay, "Cartoons and Comic Books for Changing Social Norms." "In South Asian cultures, the child, especially the girl, does not have a voice and is not recognized as a real person until she comes of age in her adolescent years," McKee explains. "The Meena stories are designed to deal with issues sensitively instead of coming into direct conflict with traditional beliefs."

With a cast of familiar and accessible characters like her parrot, Mithu, and her younger brother, Raju, Meena is an activist Dora the Explorer. The success of the Meena episodes lies in their ability to present dramatic, challenging issues, like child trafficking and the forced labor of children, in a seemingly casual way that is rooted in reality. Its impact is readily felt all across classrooms in South Asia.

"I love Meena and her parrot, Mithu," says 11-year-old Chitty, from a village near Tangail in Bangladesh, in a UNICEF report. "Since my parents started watching her stories on TV as well, I get as much food as my brothers." Her classmate, Oli, joins in with his praise. "I like Meena best, she is so much fun, and I don't think we boys should get more food or more education. I think Meena is right."

McKee notes that like all well-known cartoon characters, like Donald or Mickey, Meena will remain ageless so long as the issues she is fighting for are relevant. Meena's youth, intelligence, and outspokenness will be a timeless reminder to children in South Asia that their voice matters.