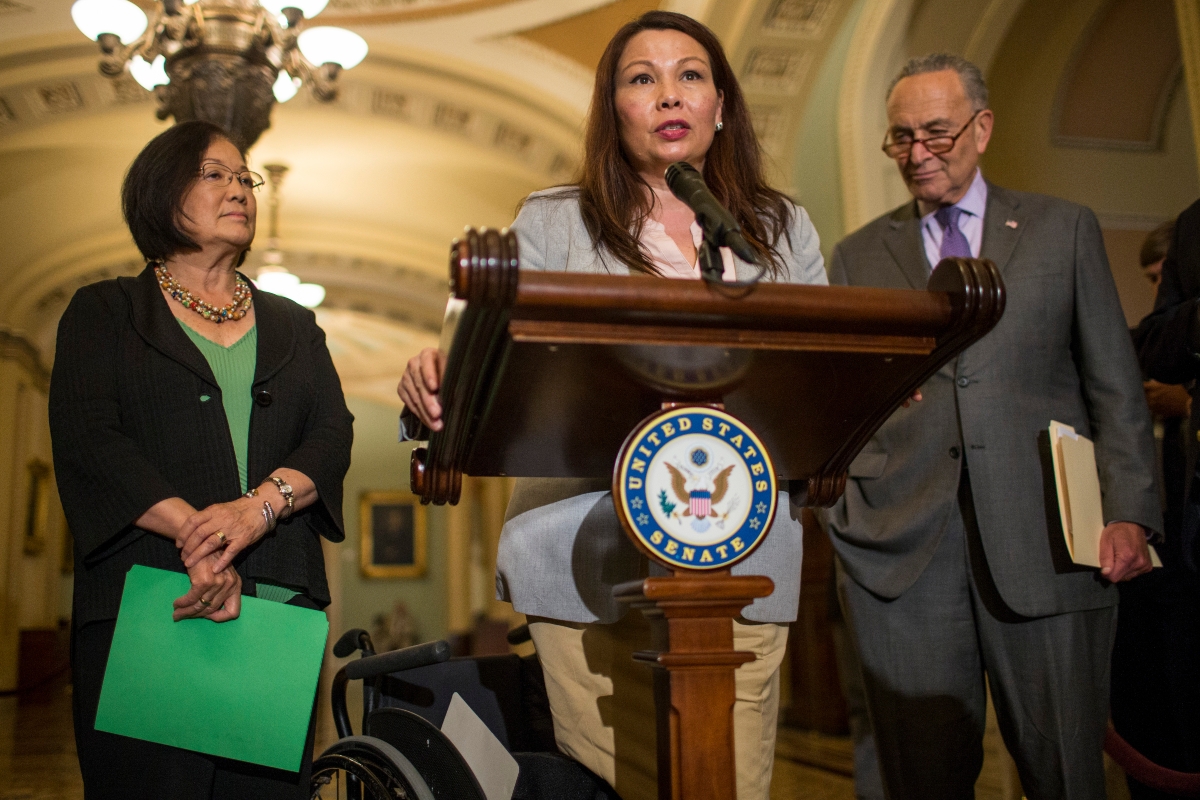 Ready or not, the 2020 presidential election season is already upon us. And Asian Americans, a group long confined to the periphery of American politics, are an emerging force: They represent 5.6 percent of the U.S. population, a number expected to reach 14 percent by 2065. Historically, Asian Americans have not voted as a bloc, supporting both Democratic and Republican candidates in more-or-less equal measures. But that's beginning to change. In the 2016 presidential election, more than three in four Asian American voters supported Hillary Clinton over President Donald Trump.

Three Asian Pacific Americans — Kamala Harris, Tulsi Gabbard, and Andrew Yang — are seeking the Democratic Party nomination for president in 2020. A fourth, Nikki Haley, is seen as a plausible contender for the Republican nomination in 2024, should she wish to seek it. There are Asian Americans in the Cabinet, in Congress, and in high-profile administrative roles in the government.

Below, we've presented a list of nine influential Asian Americans — and one Pacific Islander — in American politics. A disclaimer: This list features Americans of East Asian, Southeast Asian, and South Asian descent and does not include Americans who trace their origin to the Middle East, the Caucasus, or Central Asia.

Chao, 66, is the United States Secretary of Transportation in President Trump’s administration.

Born in Taiwan, Chao immigrated to the United States at the age of eight. Since the Reagan administration she has served in a variety of government roles and, in 2001, became the first Asian American to occupy a cabinet post when President George W. Bush appointed her Secretary of Labor. Chao is also known for her marriage to Mitch McConnell, the senior senator from Kentucky and powerful Senate Majority Leader.

In the circus-like atmosphere of President Trump’s cabinet, Chao has kept a low profile. But now she’s the latest member to become embroiled in controversy. The Wall Street Journal reported last month that she continues to hold stock in a company she had promised to divest from the year before and on June 2, the New York Times published a long exposé detailing the ties between her family’s shipping company and the U.S. and Chinese governments.

Duckworth, a 51-year-old Democrat, is the junior senator from Illinois, having been elected in 2016 after serving two terms in the House of Representatives.

Born in Thailand to a Thai mother and an American father, Duckworth moved to Hawaii at 16 and joined the Army ROTC in 1990. She is a veteran of the Iraq War, where injuries sustained after a rocket-propelled grenade struck her helicopter made her a double amputee — the first ever to serve in the Senate. Duckworth also became the first sitting senator to give birth in 2018.

Gabbard, 38, has served as a U.S. Representative from Hawaii since 2013 and is one of three Asian Pacific Americans seeking the Democratic Party’s nomination for president in 2020. Gabbard is the daughter of a Samoan father and is a practicing Hindu.

Gabbard, too, is an Iraq War veteran, having served from 2004 to 2005 before completing a tour in Kuwait from 2008 to 2009. She has attracted controversy over some of her views: Gabbard was long an outspoken opponent of same-sex marriage, a position she has since disavowed, and has emerged as the staunchest defender of Syrian dictator Bashar al-Assad in Congress. Gabbard, who endorsed Senator Bernie Sanders in the 2016 Democratic primary, has positioned herself as the strongest anti-interventionist voice in the Party’s field this time around.

The 47-year-old Haley, unlike many others in this list, isn’t currently in the United States government. The former Republican governor of South Carolina resigned as U.S. Representative to the United Nations last year, one of the very few Trump administration officials to leave office with both her relationship to President Trump and her reputation intact.

The daughter of Indian-born Sikhs, Haley has long been considered a rising star of the right and is viewed as a plausible Republican presidential nominee for 2024. Her second book, With All Due Respect, set to be published on November 12, will offer a “first-hand perspective on major national and international matters,” according to Axios.

Harris, 54, is the junior senator from California and a Democratic candidate for president in 2020. Prior to her election in 2016, Harris served as California’s attorney general and, before that, the district attorney for San Francisco.

Born to an Indian mother and African-American father, Harris attracted widespread national attention two years ago for her pointed interrogation of then-Attorney General Jeff Sessions over his association with Russian businessmen and officials during the 2016 presidential campaign. The launch event of her presidential campaign this year in Oakland, California attracted 20,000 attendees, and polling suggests that Harris is firmly in the upper echelon of the massive Democratic field. Even if she falls short in 2020, Harris’ relative youth and safe Senate seat in California figure to keep her in the national Democratic Party conversation for years to come.

Hirono, a 71-year-old Democrat, is the senior senator from Hawaii and a longtime fixture in the state’s politics.

Born in Japan, Hirono made history in 2012 by becoming the first Asian American woman elected to Senate (she's since been joined by Duckworth and Harris). Hirono has been involved in state or federal politics for nearly four decades, first joining Hawaii’s House of Representatives in 1981, and she served three terms in Congress before becoming a senator.

Hirono has emerged as one of the fiercest critics of President Trump and his administration, gaining attention through her pugnacious criticism of Attorney General William Barr’s handling of Special Counsel Robert Mueller’s investigation into allegations of Russian meddling.

The 42-year-old Khanna, the son of Indian immigrants, serves as Representative of California’s 17th Congressional district, which covers a sizable section of the Bay Area. He is also serving as the co-chair of Senator Sanders’ 2020 presidential campaign.

Khanna’s affiliation with the Sanders campaign is not a surprise. He raised eyebrows in 2018 with his "dual endorsement" of then-obscure congressional candidate Alexandria Ocasio-Cortez and her opponent, former Rep. Joseph Crowley, and has generally found a voice as an outspoken progressive in the Democratic caucus. But Khanna, whose district overlaps with the tonier parts of Silicon Valley, has generally refrained from criticizing technology companies head-on.

The 50-year-old Lieu represents California’s 33rd congressional district in the U.S. House, encompassing a swathe of western Los Angeles. A Democrat, Lieu was elected to his seat in 2014 and has since been re-elected twice.

The Taiwan-born Lieu has been among President Trump’s most outspoken congressional critics, frequently sounding off on the administration on social media. Like others in this list, Lieu has military experience, having served in the Air Force Reserve since 2000. On Twitter he has been known to invoke this status on occasion, recently telling a critic that he served on active duty to “defend your right to say stupid, racist shit.” In April, Lieu attracted attention during the deposition of far-right activist Candace Owens by playing a clip of Owens discussing Hitler.

Pai, 46, is the current chairman of the Federal Communications Commission. He is the first Indian-American to hold the position.

In his first year as chairman, Pai repealed net neutrality rules enforced by the Obama administration, sparking widespread opposition from activists concerned about growing corporate power online. (Net neutrality is a complicated subject; but essentially, it prohibits internet service providers from slowing or quickening website speeds based on the identity of the site’s owner).

More recently, Pai has taken up a decidedly more popular crusade to limit unwanted robocalls by allowing mobile carriers to automatically enroll customers in “do not call” registries.

Yang, 44, is a tech entrepreneur who is running for president in 2020.

The son of Taiwanese immigrants, Yang began his candidacy for president as a virtual unknown but has attracted attention for his lively social media presence, his detailed policy proposals, and his staunch advocacy for universal basic income. A recent poll from Harris Interactive placed him well behind frontrunners like former Vice President Joseph Biden and Sanders but ahead of more conventional candidates like Sen. Amy Klobuchar of Minnesota and Sen. Kirsten Gillibrand of New York. Yang has attracted enough public support and individual donors to qualify for Democratic primary debates this month.