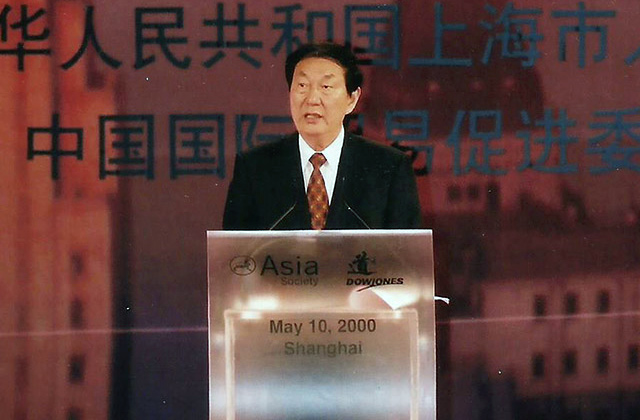 In September 1999, Asia Society brought part of its Rockefeller Collection of Asian art to a new museum in Shanghai, which would go on to break Asia Society exhibit attendance records. While bringing the exhibit to town, then-Asia Society President Nicholas Platt used the artistic foothold as a stepping stone to greater corporate and political engagement. “We lobbied municipal and party officials hard in favor of Shanghai as the site for our corporate conference in 2000, touting the meeting as a dry run for the huge APEC Summit China would host in Shanghai in 2001,” Platt recalled in his memoir China Boys. “They agreed, and the conference turned out to be our most important ever in China.”

The event, held in Shanghai in May of 2000 and titled China and Asia at the Turn of the Century: Opportunities for World Business, was Asia Society’s 11th Corporate Conference and the first in mainland China. It came at a key moment, as the country was in the midst of sweeping economic reforms aimed at gaining admission to the World Trade Organization (WTO). The conference brought together major political and business figures to discuss what membership would mean for the world business community when it became a reality the following year.

In the above photo, then-Chinese Premier Zhu Rongji, who was widely viewed as a pragmatic economic reformer, delivered the keynote address. In his remarks, he promised that China would continue opening up to the world and enact major reforms in energy, transportation, telecommunications, and commerce. He even encouraged foreign business partners to join in the revamping and reorganization of China’s state-owned enterprises. "China is the largest developing country, with an enormous market potential,” he said. “Business opportunities it promises do not just belong to the Chinese, but all enterprising and visionary entrepreneurs around the world.”