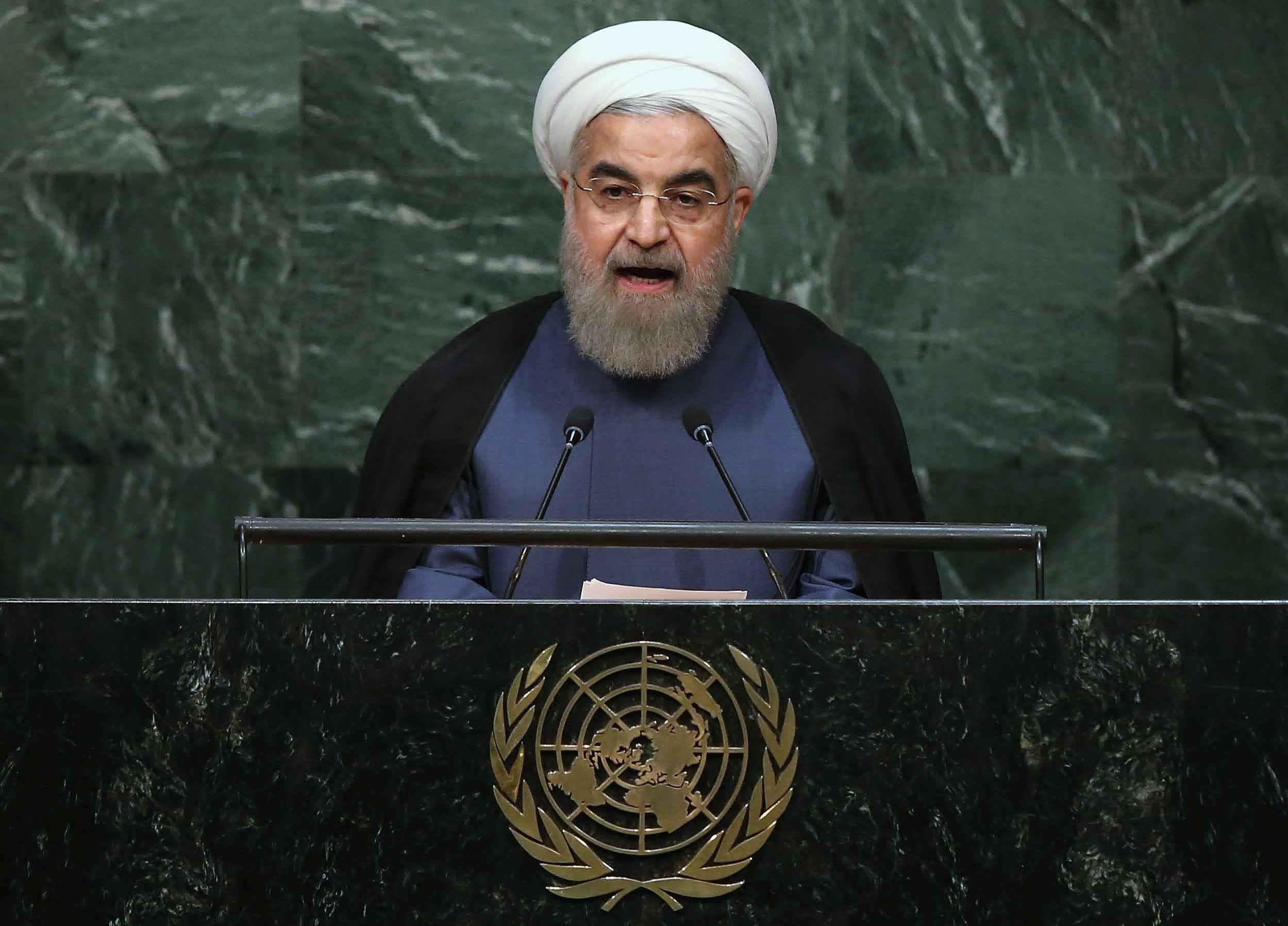 Asia Society's Asia Society's Tom Nagorski predicts that Iran will make good on its end of the nuclear deal, but this still doesn't mean that tensions between Tehran and Washington will cease. (John Moore/ Getty Images)

It seems that at this time of year we are a nation of list-makers, from gifts to buy and New Year’s resolutions, to all sorts of "greatest-hits" lists — films and books, news stories and new trends, and so on. We at the Asia Society are not immune. At least, I am not. Hence what has become a tradition here at the Asia Society: At year's end we offer predictions for Asia in the year ahead, and we take stock of the year gone by and the forecasts we made 12 months ago.

You will find a humble accounting of last year's forecast at the bottom of this blog. We called that one "Fifteen For '15," and this year we'll add one prediction to make it "Sixteen For '16". As you will see, we cover the serious and the lighter fare. We have some safe-seeming prognostications, and on other fronts we go out on the proverbial limb. (I say “we”, but as an author might put in a book’s preface, let me be clear: Any errors here are entirely my responsibility).

Let us know your own predictions and what you think of ours. And — most importantly — whether you are reading this in Asia or the U.S. or somewhere in between, we at the Asia Society wish you a happy and healthy 2016.

We begin — again — with some forecasts for economic growth. And this year, given that we'll be featuring our own major "Season of Japan" in 2016, we add that country to the mix.

1. China's GDP falls below the 6 percent mark.
2. India finishes north of 7 percent.
3. Japan’s rate hits 1.5 percent (which would actually be a stellar number — at this moment — for that economy).

AT THE BALLOT BOX

4. Riding heavy support from the “Metro Manila” vote, Vice President Jejomar Binay wins the Presidency in the Philippines.
5. In Australia, there is no early vote — and in late 2016 Malcolm Turnbull keeps the prime-ministership.
6. And in Myanmar, more of an “after-the-ballot-box” issue: 2016 proves a good year for stability and democratic transition, as Aung San Suu Kyi and her victorious NLD party selects a new president and mends fences with the former military rulers.

7. North Korea conducts a nuclear test (I know, we said this would happen last year). The test comes in 2016, China’s upset is great, and that in turn actually serves as welcome news for U.S.-China relations.
8. Iran (1): In terms of implementation of the nuclear deal, Iran does as it promised and receives the sanctions relief outlined in the deal.
9. Iran (2): Despite the above, rather than a warming between the U.S. and Iran, the post-deal period sees fresh tensions (vitriol from Tehran, measures in Washington to punish Iran on other fronts).
10. Afghanistan: President Obama, mindful of the troubles that followed the 2010 troop withdrawal from Iraq, delays the U.S. pullout from Afghanistan again. The calculus: better to renege on a pledge that risk the erosion of security gains.

11. The Air We Breathe: Fury over air pollution — and a drop in economic growth — brings some global good news from China: CO2 emissions fall, and the air quality in Beijing improves.

12. Hillary Clinton is the Democratic Party nominee for president (I know, going out on a big limb there), and, taking advantage of an early-primary standoff between Ted Cruz and Donald Trump, Marco Rubio snags the GOP nomination.
13. Asian leaders — keen to embrace the “known commodity” — breathe a collective sigh of relief as Hillary Clinton is elected the 45th President of the United States.

14. New Zealand votes to change its flag, dumping the upper-left-corner Union Jack (which smacked of colonialism) for the leaf.
15. New Zealand (more): Thanks in part to the addition of Rugby Sevens to the XXXI Olympiad, New Zealand improbably cracks the top 20 on the Medal Board. (Thanks to The Economist for this one – I just felt good about it for some reason)
16. The Great Wall ­— an epic China-U.S. co-production starring Matt Damon and Andy Lau and directed by Zhang Yimou, has a better-than-expected release in the U.S. and breaks box office records in China.

AND AS FOR LAST YEAR'S PREDICTIONS ...

TPP is completed. Now waiting on participating countries to ratify the agreement. (1 point)

2. Doubling down on last year's good-news-in-Afghanistan bet: Ashraf Ghani proves a game-changer in terms of reining in corruption, and despite the doom-and-gloom of many outside security analysts, the number of Afghan casualties actually decreases following the departure of most foreign forces.

You will be hard pressed to find people who think that the Afghanistan situation has improved. Casualties numbers are likely to be higher. In terms of Ghani’s fight against corruption: There isn’t much news on improvement. Afghanistan remains at the bottom of Transparency International’s corruption index. (0 points)

3. Doubling down on the Iran deal, too. It's not everything John Kerry wanted — and it's filled with things that infuriate the Israelis and other opponents of a deal — but a nuclear deal is signed. Iran's economy gets a near-instant boost.

Iran deal is signed. Iran’s economy may not have registered a major impact yet — but business has rushed in to Tehran. (1 point)

4. Aung San Suu Kyi gets on the ballot — and wins the presidency in Myanmar. An almost Mandela-like transformation from prison to the presidency.

While the NLD won a landslide in Myanmar and won the right to choose the next president, there was no constitutional change to allow Aung San Suu Kyi to get on the ballot. (0 points)

6.9 percent growth seems to be the consensus. (1 point)

6. Not that it's a contest — and anyway, it starts from a lower baseline — but India clears the 7 percent GDP mark.

This did not happen. (0 points)

8. The wreckage of Malaysian Airlines flight 370 is found — and the discovery sparks a fresh outcry over how long it took, and how much the search cost.

Pieces of the airplane were found on the island of Reunion; not the main wreckage. (0 points)

9. After a year in which ISIS, Ukraine, and Ebola were the largely-unanticipated crises, 2015 brings a major cyberattack ("major," as in not just Sony and North Korea). Retaliation follows. It's the unexpected crisis of the year.

This did not take place. (0 points)

11. After a pair of particularly difficult years on the natural-disaster front, the Philippines is largely spared — the lowest number of casualties from typhoons in decades.

The casualties have indeed been lower this year and for a decade. (1 point)

12. While we're on the Philippines, the APEC conference (to be held in Manila) has a major on-the-sidelines accomplishment: a meaningful easing of tensions between China and the Philippines in terms of their maritime disputes.

The South China Sea was kept off the main agenda. There doesn’t seem to have been a sideline discussion between China and the Philippines. If anything, the Philippines and Vietnam affirmed a united front against China. (0 points)