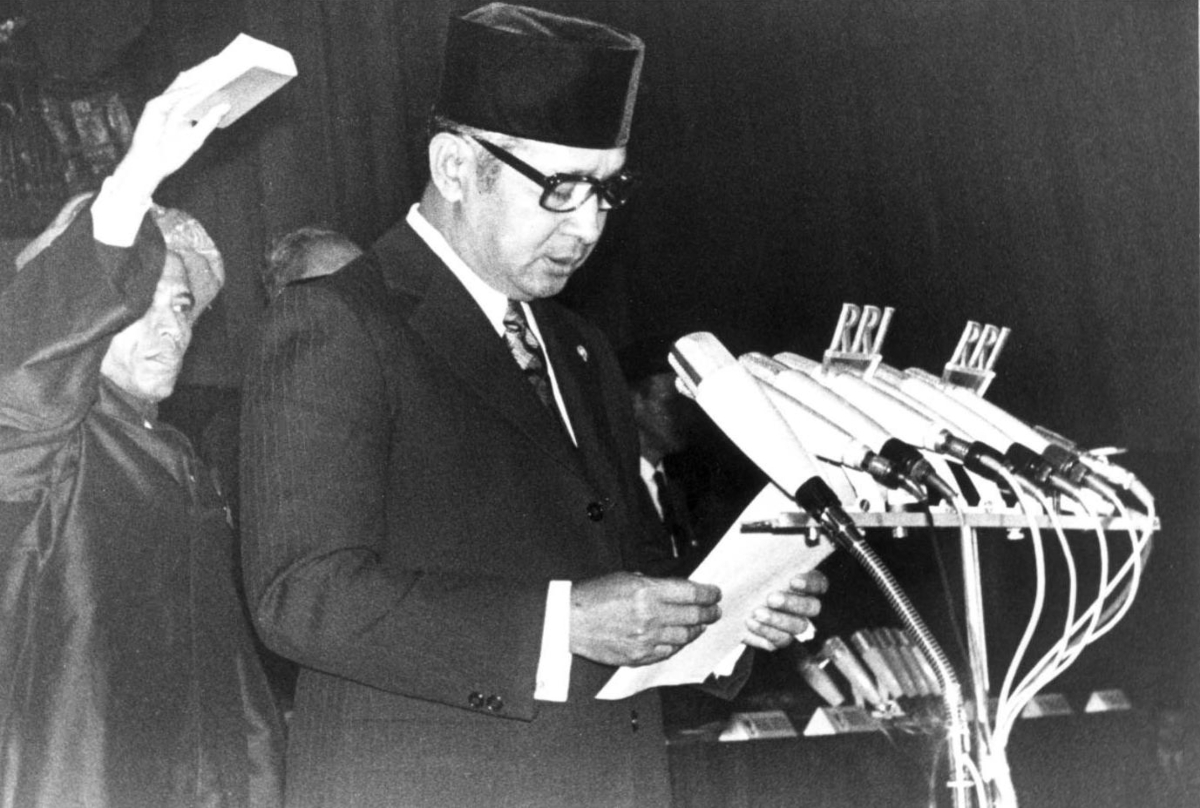 The Indonesian leader Suharto, pictured here in 1968, oversaw an extermination campaign against members of the Communist Party as well as Indonesians harboring leftist sympathies. He ruled until 1998. (AFP/Getty Images)

In 1965, a high-ranking Indonesian military leader named Suharto launched a brutal extermination campaign against Indonesians either affiliated with Communist Party or harboring leftist sympathies. The killings claimed up to one million lives and cemented Suharto’s grip on power for the next 33 years.

In his new book The Jakarta Method, author Vincent Bevins documents how the United States government, then escalating its involvement in the Vietnam War, was complicit in Suharto’s rise, which established a pro-U.S. government in the world’s fourth-largest country. Bevins also shows how events in Indonesia became the template for anti-Communist campaigns elsewhere in the world, particularly in South and Central America in the 1970s and 1980s. Three decades after the end of the Cold War, Bevins argues that the “Jakarta method” has indelibly shaped the trajectory of many of the world’s developing countries.

Bevins served as an Indonesia-based correspondent for The Washington Post, a London-based reporter for The Financial Times, and covered Brazil and South America for The Los Angeles Times. He spoke with Asia Blog last week from his home in Sao Paulo.

Americans are inundated with stories from the Vietnam War from an early age, yet, as you’ve written, the anti-communist killings in Indonesia have largely been forgotten in the U.S. Why do you think our “victory” in Indonesia has received so little attention?

I think there are two reasons the tragedy in Indonesia fell deep down into a memory hole. The first is precisely because of how successful the operation was. Its purpose, as undertaken by the Indonesian military, was to keep people quiet: not only quiet about their political beliefs before the violence started, but also about what happened. The Suharto dictatorship managed, to a really surprising extent, to control the narrative for decades afterwards. The extent that it was a success is the first part of why we’ve forgotten about it in the Western hemisphere, if we had learned about it at all.

The second reason is that events in Indonesia were quickly overshadowed by the Vietnam War. Vietnam, very much unlike Indonesia, involved American citizens. It was a problem, an embarrassment, a quagmire; it became enmeshed in domestic politics. And the seemingly natural progression of a country into the U.S.-led global order didn’t fit into the limited amount of attention Americans paid to Southeast Asia in the 1960s. Vietnam really overshadowed it.

And I think a third reason is that Americans had an implicit understanding of how the world was supposed to unfold after World War II. To hear that a country joined our team wasn’t surprising or strange, and didn’t usually require further investigation. The deeply-held American assumption is that if someone ends up on our side it’s because they want to be.

You write that a lot of “third world,” or non-aligned countries, were drawn to a socialist, or socially democratic system of government — and that they were largely independent of the Soviet Union. What do you think would have happened if the U.S. had tried to work with these governments, instead of trying to squelch their nascent socialist movements and impose more ideologically friendly regimes?

One way to think about this would be to ask, for example, that if Ho Chi Minh in 1945 declared North Vietnam’s independence from France and tried to align the country’s independence with the American revolutionary tradition — could it have been possible for the U.S. to take his side? Could it have used the force and influence of U.S. power to push him toward a more democratic path that respected human rights? I think one could imagine that happening.

The deeply-held American assumption is that if someone ends up on our side it’s because they want to be.

By 1945, Ho Chi Minh was already pretty much a Marxist/Leninist. But what about cases like Guatemala, Iran, or Indonesia, whose leaders weren’t? Could you imagine the U.S., instead of trying to oppose movements that were slightly to the left of what was acceptable in Washington at the time, allying with them and trying to press for the best outcome? I think you could.

A really big question we don’t have the answer to is to what extent these kinds of interventions were fueled by a misunderstanding of socialism — or by a confusion of nationalism and communism. And to what extent were they fueled by actual threats to a world order that was coming into being, and that the United States needed to dispense with in order to construct the current kind of globalization that we have.

Does the U.S. overestimate the extent that the Soviet Union wanted to intervene in other countries?

I think we know that three things happened: There was legitimate concern about what the Soviet Union was going to do around the world after World War II, there were people who convinced themselves that the Soviets were going to do things they were not going to do, and there were people who cynically played up the threat of Communist aggression in order to justify a particular foreign policy goal. You don’t have to pick and choose.

Pointing to the intentional exaggeration does not negate the reality of the real concerns. And the unintentional exaggeration, the overreaction because of self-defensive paranoia — I don’t think that’s a good get-out-of-jail-free card. If any other country carries out human rights abuses or persists in carrying out atrocities, we usually don’t say “well, they thought they had to” as an excuse. All these things exist on top of each other, and it takes careful work to pick them apart.

Why hasn’t Indonesia had a peace and reconciliation process like that found across Latin America?

The short answer is the influence of the TNI (Indonesian National Armed Forces). A lot of activists thought that when [President Joko Widodo] took office, he’d be the one to finally apologize and open up the record. And while we can only speculate, a fairly common guess is that the influence and power of the Indonesian military has prevented this from happening.

In Santiago, Chile, there’s a very powerful museum with a candle lit for every victim of anti-communist violence in the early '70s. They have a giant installation in the entrance room of every truth and reconciliation commission that’s ever happened around the world. And the tragic and poetic part of this room is that the Indonesian plaque was started and then abandoned.

The TNI is still in charge — they still have significant power. But there’s also an elected democratic government in Indonesia, which is a very important and hope-inspiring development for the region as a whole — this fragile but resilient Indonesian democracy.

Twenty-five to 30 percent of Indonesians were either in the Communist Party or affiliated with it in 1965. Eliminating them was a really wrenching and complete transformation of society.

And to be a little speculative, a complementary answer could be the extent of the horrors. It’s easier for the Brazilian military to admit that there are 400 or so disappeared people. You can blame it on bad elements in the government, you could say it was a mistake. But 25 to 30 percent of Indonesians were either in the Communist Party or affiliated with it in 1965. Eliminating them was a really wrenching and complete transformation of society. And it may be too horrible for current leaders to admit.

How do you see the “Jakarta method” playing out in contemporary U.S. foreign policy and world affairs?

In the much broader context into which I place the narrative of the book, I rely on a Cold War historian named Odd Arne Westad. He’s no radical — he’s very much a mainstream liberal. And he takes a step back and points out that if you look at the United States, it has pretty much always been engaged in aggressive militarism. There’s never been a point when the United States has not been, somehow or another, trying to maximize its influence elsewhere in the world. And what he sees is that at the end of the 20th century, when communism stops being the big bad guy, a lot of the same mechanisms, technologies, and energies are instead pointed at the Muslim world. Westad sees the War on Terror slotting into the world-historical position that the Cold War occupied.

What he also points to is that because the Cold War is the epoch in which decolonization happened, most countries in the Third World found their present configuration in a Cold War conflict. So, to a large extent, because the Cold War immediately followed an era of European direct colonialism, the countries that became independent nations were largely shaped by how the Cold War affected them. Political science teaches us that institutions are path-dependent, and it’s very hard to restart them. The long tail of the Cold War, the good, the bad, the very ugly — and my book is about the ugly — will cast a long shadow over most nations on planet Earth.

What are the biggest misconceptions Americans have of their country’s foreign policy?

I think we’re in two minds as a nation. Our mainstream discourse, and our identity as American citizens, requires an a priori belief that we’re a benevolent force in world history. But at the same time when you bring up the CIA, coups, and dictators, it’s understood that a lot of very bad things have happened. And these two things exist in an uneasy tension.

When I started researching this book, I didn’t consider myself to be especially naive. I thought I had a decent idea of what this stuff was, but it’s worse than I thought. I think that an era of full, unquestioned, and unquestionable hegemony, like what the United States experienced between 1989 to maybe 2020, makes it hard and even pointless to examine the nature of that system. But as things enter into a wobbly position, as they are now, because of the rise of China and the obvious failures of the U.S. in the face of the coronavirus, it becomes easier to examine the dark side of our history — and also perhaps more urgent and necessary.