Myanmar as a Democracy: What's Ahead for Aung San Suu Kyi's Majority Party? 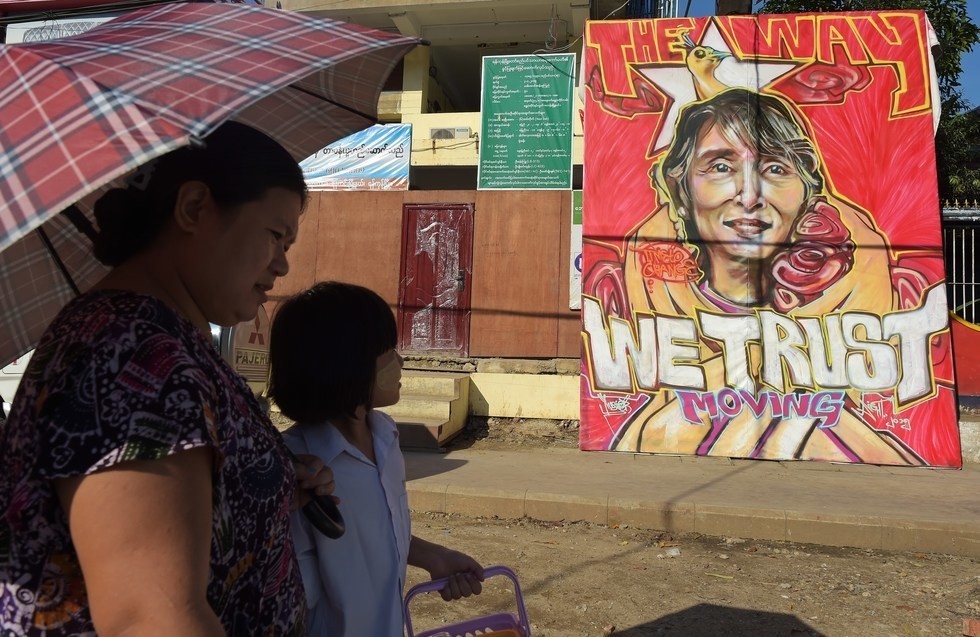 People walk past a graffiti depiction of Myanmar’s opposition leader Aung San Suu Kyi outside the headquarters of the National League for Democracy party (NLD) in Yangon, Myanmar on November 13, 2015. (Nicolas Asfouri/Getty Images)

On November 8, Myanmar held national elections for the first time since 1990, which produced a landslide win for the National League for Democracy (NLD), the party led by Nobel Peace Prize laureate Aung San Suu Kyi. The military-backed government of President Thein Sein has since promised to work with the NLD on the handover of authority. The next parliament and executive branch will face a host of domestic pressures, as well as the prospect of changing relations with the U.S., China, and other countries.

Priscilla Clapp, Senior Advisor to the Asia Society Policy Institute, served as the U.S. Chief of Mission in Myanmar in 1999-2002 and continues to be engaged in the country. On November 12, she delivered a briefing on Myanmar’s election as part of ASPI’s AsiaConnect series. Below are condensed and edited excerpts from her remarks. A full recording of the briefing can be heard using the audio player below.

The NLD will run the parliament with the exception of questions about constitutional amendments, which require a parliamentary vote of more than 75 percent to pass. The NLD will also have the final say on who the speakers will be in both the lower and upper house and on who at least two of the three candidates for president will be. The military group will have its own candidate for president. The final vote for president will be done by the parliament as a whole, so the NLD’s choice of president will win. One of the vice presidents will be the military’s choice. In the National Defense and Security Council, the major decision-making body, you will have the military and the NLD.

The constitution was designed by the military to ensure that it can protect its critical interests. Its most important interest is the stability and cohesion of the country. Senior General Min Aung Hlaing has said the key for them is going to be disarming and making peace with the ethnic armed groups, which could take five to ten years. The military reserved 25 percent of the seats in the parliament so it could make sure the constitution remains in place until the country is stable and governable. But the military will be arm-in-arm with the NLD now, and I think that’s a very healthy development.

Aung San Suu Kyi has asked to meet with the president, the commander-in-chief, and the current speaker of the parliament to decide on a plan for the transfer of power to the new government. I wouldn’t be surprised if the constitutional provision that bars her from being president comes up in that meeting. There is technically a possibility of changing that before the new parliament sits. The win was so big that it will have a way of affecting people’s attitudes toward what we think is impossible. If the constitutional provision remains and there is another NLD president, I think Aung San Suu Kyi will do what she said in a couple of recent interviews: that she expects to be in charge of the next government, and that she would name the president and direct the president.

I think Myanmar will continue to maintain a kind of equidistant balance in their relations with all the great powers. It’s a long tradition in that country that dates back to the end of the colonial period. We can expect them to maintain a friendly relationship with China. China would be well advised to sit back and let things develop, because they’ll be the single most important neighbor for Myanmar. Myanmar is the ASEAN frontline on the mainland with China.

I think Myanmar will be looking to the U.S. and other countries for capacity building in the government and in civil society. The U.S. has been doing a lot of that with civil society, but our USAID resources are restricted by Congress from going to the government. That’s where I think we’ll have to moderate the restrictions that we put on our current aid. The NLD will be looking to Europe, Japan, and all donors who are prepared to be generous, including international financial institutions, for assistance. But the NLD will want to be out in front in determining how that assistance should come in. They’ll probably put together their own plan for development and then invite donors to contribute to it, instead of having us tell them what they should do.

Our original sanctions were all premised on the requirement that the military hand over governance to the NLD, which had won the 1990 elections by a large plurality. These elections were even bigger than 1990, and the NLD probably won by at least as much as they did in 1990. So whatever the requirements were of our original sanctions, I think they are being met with this election. It’s going to be an appropriate time for the U.S. government to take a hard look at the remaining sanctions. The SDN list [Specially Designated Nations list, maintained by the U.S. Treasury Department, of foreign individuals and companies that U.S. entities are barred from doing business with] is the most difficult part. We will need to keep some form of sanctions to encourage Myanmar in a positive direction. But I think we need to scrub that list because there are many people on it who are holdovers from the days of military government.

Listen to the AsiaConnect briefing with Priscilla Clapp using the audio player below.