Lost at Sea: Four Famous Shipwrecks Waiting To Be Discovered 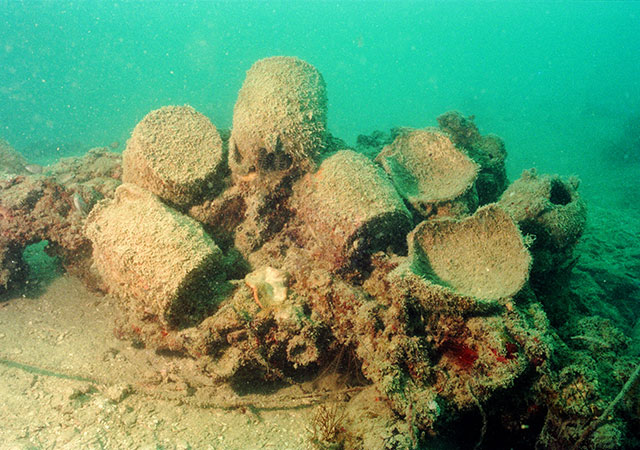 Changsha ewers artifacts trapped in a coral concretion on the top of the wreck mound. Items from the Belitung shipwreck can be seen at Asia Society Museum's 'Secrets of the Sea: A Tang Shipwreck and Early Trade in Asia' exhibition. (Michael Flecker)

Nearly 75 years after its unlikely sinking became an international sensation, a team of American and French researchers finally located the hulk of the famed luxury cruise liner RMS Titanic on September 2, 1985. The discovery was made after at least three teams had previously attempted and failed to locate the passenger ship, whose demise occurred on April 14, 1912, after striking an iceberg on her maiden voyage from Southampton, England to New York.

Asia Society Museum’s exhibition Secrets of the Sea: A Tang Shipwreck and Early Trade in Asia, which runs from March 7 to June 4, 2017, in New York, brings the precious contents of a shipwreck discovered off Belitung Island in the Java Sea to American audiences for the first time.Learn more

According to the expedition leader, the so-called unsinkable ship was identified using undersea robots and sonar imagery in waters as deep as 12,000 feet.

“Our initial reaction was excitement, then a coming down off that to realize we had found the ship where 1,500 people had died,” expedition leader Dr. Robert D. Ballard of the Woods Hole Oceanographic Institution in Massachusetts, said in a 1985 New York Times interview. ''To finally put those souls to rest was a very nice feeling,'' Ballard told the Canadian television network CTV.

The discovery of the Titanic in 1985 may have closed the book on one of the most famous and elusive shipwreck hunts in history, but it also attracted public interest to a world of untold underwater mysteries that includes even older, storied vessels whose watery graves still remain lost at sea.

Today, dozens of historically significant ships that sit in the vast depths around the world preserve rich tales of history — heroic explorers, grisly battles, and opulence — all waiting to be unearthed. From atomic bomb vessels to legendary loot, here are the stories behind four vessels that still await discovery on the ocean floor.

The USS Indianapolis was a military ship that carried the world’s first operational atomic bomb. On July 26, 1945, after the ship successfully delivered the bomb to an American military base on Tinian, a tiny island located in the Philippine Sea, it received orders to head to the Philippines’ Leyte Gulf to prepare to invade Japan. However, on June 30, 1945, halfway between Guam and the Gulf, the USS Indianapolis was struck by two torpedoes fired by a Japanese submarine, and, according to the military’s official Naval History and Heritage Command, sank in just 12 minutes. The rapid sinking of the ship coupled with severe damage on its communication systems prevented survivors from sending out distress signals.

Of the 1,196 sailors and Marines aboard, 900 were able to make it off the ship, only to be stranded in shark-infested waters. All but 316 had died from shark attacks and exposure when rescuers arrived nearly five days later.

The sinking of the Indianapolis is now remembered as the worst American naval disaster of World War II. Despite multiple expeditions using sonar and underwater vehicles, the ship’s wreckage has never been found. Part of the problem lies in the extreme depths of the search area. According to some estimates, the cruiser may rest under 12,000 feet of water.

Like the Titanic, the extraordinary history of the USS Indianapolis attracted the attention of Hollywood. In 2016, the movie USS Indianapolis: Men of Courage starring Nicolas Cage premiered in the Philippines and the United States.

The Flor de la Mar, sometimes also referred to as Flor do Mar, became one of the most famous shipwrecks in history after sinking in early 1512. The ship, whose name means “flower of the sea,” is considered to be the holy grail of sunken treasures, reportedly carrying priceless gifts of precious stones, metals, and rare artifacts intended for the Portuguese Queen Dona Maria and King Manuel I. The Portuguese carrack sank carrying the largest treasure trove in the country’s naval history from Portugal’s conquest of Malacca, Malaysia, back to Lisbon. The ship was caught in a violent storm while traveling through the Strait of Malacca and shipwrecked on the reefs of Sumatra, splitting in two and spilling its priceless contents into the ocean.

The renowned American diver Robert Marx, known best for diving for shipwrecks and treasure hunts, reportedly spent millions in an effort to find the Flor de la Mar, calling the ship “the richest vessel ever lost at sea.”

To this day, the whereabouts of the Flor de la Mar remain unknown.

In 1594, Portugal’s 1,200-ton ship Las Cinque Chagas sailed for Lisbon, Portugal, from Goa, India, with a cargo of 3,500,000 Portuguese cruzados, along with 22 treasure chests filled with diamonds, rubies, and pearls — a booty estimated to be worth well over $1 billion today. According to a report by Gizmodo, the ship measured 150 feet long and 45 feet wide, a gargantuan size for its time, and carried more than 1,000 people, of whom 400 were reported to be slaves.

Las Cinque Chagas managed to make it all the way back to Portuguese waters and was in the final stretch of the journey back to Lisbon when it was attacked by three British privateer ships — the Mayflower, the Royal Exchange, and the Sampson. Privateer ships were captained by private entrepreneurs who refitted old merchant ships or obsolete warships.

The attack reportedly lasted two full days before Las Cinque Chagas caught fire and eventually sank off the coast of Portugal’s Azores on July 13, 1594. Today, the ship is frequently referenced as one of the most sought-after shipwrecks with sunken treasure. Some salvage operators believe that the wreck could be in waters as deep as 2,500 feet.

In 1641 a rundown British ship called the Merchant Royal set sail from the Spanish port of Cadiz to Antwerp, Belgium, carrying a haul of gold, silver, and coins, reportedly worth millions today, to soldiers fighting for Spain. On September 23, the ship’s pumps that counteracted pre-existing leaks reportedly broke down and the vessel began to sink somewhere off the U.K.’s Land’s End. Treasure hunters have now been searching for the ship, also known as the “El Dorado of the Sea,” for decades.

While the captain along with 40 of 58 crew members were rescued by another British ship, no reports indicated that any of the cargo on board was able to be salvaged.