Interview: What Costs Will Fracking Bring to China? 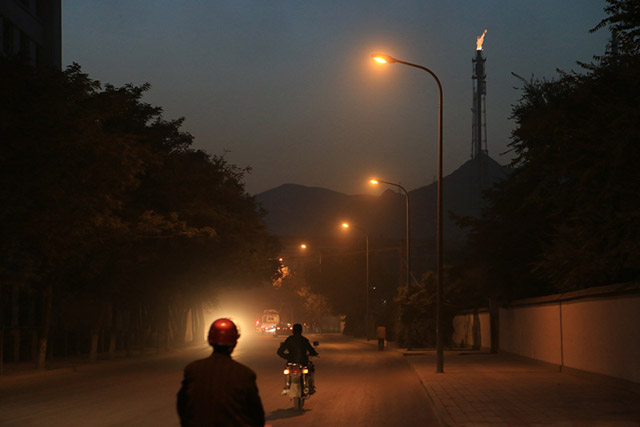 The term "fracking" just entered the Merriam-Webster Dictionary last month, but gas companies in the United States have been developing this technique for releasing natural gas from rock formations for over a decade now. The discovery of major natural gas fields across the U.S. not only promised a cheaper and secure energy source, but also led to natural gas's being heralded as a "green" fossil fuel. When burned, natural gas emits half as much CO2 than coal, but severe environmental problems at the drill sites and methane leaks have many questioning its green label.

Now China, whose economic growth has been mainly powered by dirty coal, is adding natural gas to its energy mix, and wants to frack the world's biggest gas reserves three times faster than the U.S. Will the onset of fracking in China drive down its coal addiction? At what costs? Next Wednesday, June 11, we will preview a yearlong investigation by Mother Jones and Climate Desk into China's nascent fracking boom, followed by discussion of China's energy future moderated by Climate Desk producer James West, in conversation with Mother Jones reporter Jaeah Lee, Asia Society's Orville Schell, energy adviser Ella Chou, and Gasland director Josh Fox.

Via email, James West and Jaeah Lee answered a few questions for Asia Blog ahead of next week's panel discussion.

How do China and the United States' natural gas reserves compare in terms of size and accessibility? How are the two countries working together to develop this industry?

China has bigger reserves than the U.S., according to early estimates. But what we're told is that getting to them is the big challenge — they are deeper and buried in much more complex terrain than in the U.S. (And anyone who has been on a hair-raising car ride through remote Chinese villages knows, the roads and infrastructure aren't very good.) So that's where the U.S., through government forums and private joint ventures, is taking a big role: sharing knowledge with their Chinese counterparts on the best ways to do this, not without the promise of a handsome reward at the end of it: lots of natural gas.

Where did you travel to report this story? How are communities in China's fracking regions changing in response to this new industry?

Wow. We went to places that we found simultaneously beautiful and terrifyingly degraded. We started in the industrial coal belt in central and western China to experience what damage coal has done on the environment across China (which didn't help James's persistent cough, which we attributed to the pollution), before plunging into the lush, green Sichuan Basin (and yes, the food is way hotter than this particular lao wai has ever experienced before). We saw people already responding to the fledgling industry, complaining about water quality and scarcity, the noise, local corruption. A sense of helplessness — but also resilience, for sure — pervaded every conversation we had in places like Shangluo, a boom town on a tributary of the Yangtze.

A vocal opposition in the States is calling awareness to environmental problems caused by fracking. Are similar voices emerging in China? How aware were the local Chinese people you met with, of the environmental effects of this industry?

Are people aware? Yes. The villagers who lost their land to fracking wells felt done-over by the takeover, as well as the obvious environmental problems. Would they call themselves environmentalists? No. Their concerns are much more practical: the health of their families, their crops, the quality of the air they breathe and the water they drink, the compensation they were promised for their land. But that doesn't mean there isn't a growing environmental consciousness in China, especially among young Chinese people, and especially in the cities, where the air pollution is most visible and a growing middle class more vocal about their needs. The willingness to start organizing around environmental issues was really inspiring.

Clean water is already quite scarce in China. Fracking is a water-intensive process, and has resulted in polluted ground water in the U.S. Will this happen in China?

We already saw evidence of that. A farmer complaining about "scum" floating on top of her well water; another complaining about having to hike to the next village over to haul back water to cook rice and feed her grandkids. Without proper oversight, we can only imagine how these problems would likely magnify as China ramps up shale gas production.

Bloomberg reported last week that although natural gas is heralded as a bridge from coal to renewables, in actuality the U.S. is investing less in wind and solar since embracing natural gas. Do you see this trend occurring in China?

Energy experts tell us that China, by necessity, is pursuing every possible energy source it can to keep up with demand, from coal to gas to wind and solar. China is a world leader in renewable energy investment, and it's because every option has to be on the table. China is still hauling millions of people into its cities, and wanting to improve the way of life for millions more in the middle class. But all of that comes with the need to keep the lights on, and the cars on the road. China must fight its addiction to coal. And so they're doing everything, and more of it, than anywhere else.

What, if any, benefits do you see fracking bringing to China?

If it can be done right — and that's a big "if" — we're told it does have some potential to offset the use of coal, to a degree, as China tries to use more natural gas in its energy mix. That could mean less toxic smog, less carbon in the atmosphere, and a new market for cheaper domestic energy. On the other hand, China is famous for polluting first, and cleaning up later, and whether local communities can bear the brunt of such hurtling development is a real problem.

Leah Thompson is Assistant Director of Asia Society’s Center on US-China Relations. She is a video editor and the Associate Producer of COAL+ICE, a documentary photography exhibition.
@leahvivi