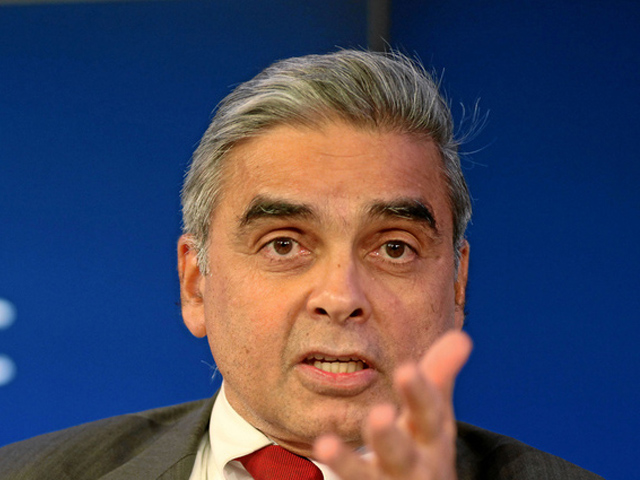 A member of Singapore's diplomatic corps for 33 years, and currently Dean and Professor in the Practice of Public Policy of the Lee Kuan Yew School of Public Policy at the National University of Singapore, Kishore Mahbubani is widely recognized as an expert on Asian and world affairs. In his latest book, The Great Convergence (PublicAffairs, 2013), he argues that with the rise of a new Asian, and indeed worldwide middle class, the world is rapidly approaching an unprecedented convergence of interests and perceptions, cultures and values: in other words, a genuinely global civilization.

Mahbubani joins analyst and Eurasia Group President Ian Bremmer at Asia Society New York on February 6, 2013 for a discussion on the policies and approaches necessary for governing in this increasingly interconnected and complex global environment. And on February 26, Mahbubani will appear at Asia Society Northern California to discuss "Asia's Rise and the Future of the U.S. as a Pacific Power."

Asia Blog reached out to Mahbubani ahead of his New York talk to discuss the future of politics in Asia, including China's tough stance on the South China Sea, Internet freedoms, and ASEAN-China relations.

"The biggest issue facing Asia today is the challenge of managing a rising and emerging China," Mahbubani told us. He believes that the "big test for Asia is whether China's neighbors can learn to accommodate China's rise and whether China itself can learn to address its neighbors' concerns better." Nonetheless, the veteran statesman remains optimistic, arguing "as I document in The Great Convergence, this can be done." He also predicts "calm waters" for the United States and China in the coming year.

Read the rest of the interview below:

In The Great Convergence, you are critical of China's mistakes in managing its relations with the global community. In particular, you say that its competitors will "seize the advantages provided by China's mistakes." What do you see as a best case and worst case scenario emerging from China's missteps in engaging with the rest of the world?

One great unsolved mystery of our times is why China went from three decades of deft diplomacy to making serious mistakes in its relations with its neighbors. Something clearly went wrong in China's decision-making, but we may never find out what really happened. However, with China's new leadership assuming office in 2013, it is likely that some of China's traditional diplomatic deftness will return.

Nevertheless, two challenges will be difficult to resolve. Most Chinese believe with great passion that the Diaoyu Islands belong to them. They also believe that their ownership was confirmed by the Cairo Declaration, which stated "that all the territories Japan has stolen from the Chinese, such as Manchuria, Formosa, and the Pescadores, shall be restored to the Republic of China. Japan will also be expelled from all other territories which she has taken by violence and greed." Japan has however had possession of these islands since 1972, when the USA handed over administrative control of these islands to Japan. When both sides believe passionately that they are right, we have a perfect prescription for troubled relations between China and Japan. Past history also hangs like a heavy cloud over China and Japan.

Similarly, by submitting the "nine-dash" South China Sea map as a document at the United Nations, China may have created a problem for itself. As I document in The Great Convergence, this nine-dash line could prove to be an albatross preventing China from having good relations with the ASEAN region. China will have to work hard to regain its deft diplomatic touch to reduce its problems with Japan and ASEAN.

You said recently that the Western press incorrectly perceives Singapore as "a nicer version of North Korea" with respect to civil liberties. In the aftermath of the Southern Weekend protests in China, how can Asian governments allow for greater freedom of information in the Internet age, while still maintaining domestic stability?

All governments that have regular elections need not fear the Internet. Indeed, they will have a more informed citizenry to deal with. Also, all governments that are successfully raising the living standards of their populations, as the Chinese government has, can live with an open Internet. It is only the totally closed societies, like North Korea, who cannot yet share the Internet with their people. Yet even North Korea was recently advised by Google chairman Eric Schmidt to open the Internet to their people. "As the world becomes increasingly connected, their decision to be virtually isolated is very much going to affect their physical world, their economic growth and so forth, and it will make it harder for them to catch up economically," he told reporters, after visiting North Korea.

In any case, no society can go back to the old Soviet era when governments could successfully keep their populations shut away from the world. As I document in The Great Convergence, we are converging into a single and open information universe that is paving the way for a new global civilization.

What advice would you give to incoming ASEAN Secretary-General Le Luong Minh on the South China Sea issue, given the fractures within the regional bloc and challenges of managing relations with external ASEAN partners?

Amb. Le can make a big contribution towards improving ASEAN-China relations by focusing on enhanced economic cooperation. ASEAN trade with China has grown exponentially from $7.42 billion in 1990 to $292.78 billion in 2011. It grew even faster after the ASEAN-China FTA was signed in 2004 with China providing the ASEAN countries an "early harvest" of unilateral trade concessions.

By helping to create a larger cooperative framework between ASEAN and China, Amb. Le will also be helping to provide a buffer from any tensions reverberating from the South China Sea issue. At the same time, Amb. Le should also lead the effort to ensure that the other FTAs signed by ASEAN are implemented as quickly and as effectively as the ASEAN-China FTA.

What are the biggest issues facing Asia currently, and what are your predictions for the biggest Asian — or even global — news events in 2013?

The biggest issue facing Asia today is the challenge of managing a rising and emerging China. China's peaceful rise since Deng Xiaoping's bold reforms of 1979 has been a remarkable historical development. Few great powers have emerged as quickly and as peacefully as China has. However, the events of the past two years with Japan, South Korea and ASEAN show that China's re-emergence may no longer be as smooth as before. The real big test for Asia is whether China's neighbors can learn to accommodate China's rise and whether China itself can learn to address its neighbors' concerns better. Both sides will have to be careful and pragmatic. Fortunately, as I document in The Great Convergence, this can be done.

The biggest news event we should look for in 2013 is the biggest non-news event. We should look for the dog that did not bark. Many people expect to see problems in the relations between the United States and China. I predict that there will be calm waters. Obama and Xi Jinping have started new terms. Both need to focus on domestic economic development. Their legacies will depend on economic successes, not geopolitical conquests. If they are rational actors, both will collaborate. Yes, there will also be competition but there will be greater pressure to collaborate. Hence, somewhat unusually, we may see a relatively stable relationship between the world's greatest superpower and the world's greatest emerging power in 2013.