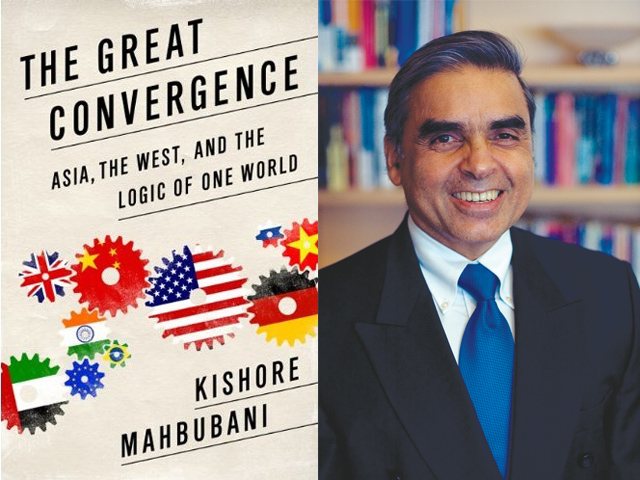 For years Singaporean diplomat and academic Kishore Mahbubani has studied the changing relationship between Asia and the U.S. in works like Can Asians Think? and The New Asian Hemisphere. In The Great Convergence, he assesses a remarkable turning point in world history in which unprecedented numbers of the world's population, driven by Asian economic growth, are being lifted out of poverty and into the middle class. As a result, argues Mahbubani, there is an unprecedented convergence of interests and perceptions, cultures and values: a truly global civilization.

Mahbubani will join Ian Bremmer at Asia Society New York on Wednesday, February 6, 2013 for a discussion on the policies and approaches necessary to govern in an increasingly interconnected and complex global environment.

It is truly good news that the vast majority of the world’s people now have a common set of material aspirations. Once material aspirations become more important than differing ideological or religious aspirations, an overriding set of common interests will motivate the vast majority of the world’s population to work together. Let me take a fairly extreme example of two societies that are sharply distrustful of each other: India and Pakistan. For the past 65 years, since partition, both have focused on their differences. Today, the aspirations of both populations are converging. The priority of both populations is economic development that will deliver a better material standard of living. The incentive to cooperate becomes greater and greater. Minorities in both countries may still want to emphasize their differences and perhaps even stimulate conflict. But the converging aspirations of the majorities make conflict harder and harder. The GDP per capita in India and Pakistan has increased from US $80 in 1960 in both countries to $1,500 in India and $1,000 in Pakistan in 2010. A January 2011 article in Pakistan’s largest English-language newspaper, the News International, declared:

Despite a history of conflicts, mistrust and estranged relationship, an overwhelming number of Pakistanis and Indians want peace and friendship between the nuclear-armed South Asian nations, a survey conducted on both sides of the border has revealed. The survey — conducted by independent research agencies and sponsored by the Jang Group of Pakistan and The Times of India on the first anniversary of their joint peace initiative “Aman Ki Asha” — showed that 70 per cent of Pakistanis and 74 per cent of Indians want peaceful relations.

India and Pakistan, like other traditional rivals such as Greece and Turkey, or Argentina and Brazil, are finding that their populations are being swept along each day by a strong global mainstream momentum that is becoming irresistible. Populations all over the world want their governments to focus on economic development, not on war. Hence, there is pressure on governments to build better infrastructure, better roads and railways, better sewage pipes and schools. We have, as a result, seen a greater improvement in the standards of living of populations in the last 30 years than we have in the last 300 years.

These material aspirations are matched by similarly shared educational aspirations. A hundred years ago, getting into Harvard and Yale may have represented the aspirations of elites in America. Today, getting into Harvard and Yale represents the aspirations of elites all over the world. Parents in Santiago or Singapore, Tehran or Tokyo, Beijing or Budapest, jump for joy when their child gets admitted into Yale. I know this personally: when two of my children got into Yale, I was congratulated in all corners of the world because everyone knew what it meant. When people all over the world have common aspirations, we are clearly moving toward a one-world dynamic where our common aspirations are greater than our varying cultural or ethnic aspirations. It is true that very few, especially very few non-Americans, will get admitted into Ivy League universities. But the fact that the best minds all over the world have a common aspiration to get their children admitted there has an enormous unifying effect on global consciousness.

The explosion in the numbers of children going to primary and secondary schools is about to be accompanied by an explosion in the numbers going to universities. What is truly revealing is how the curricula of the best universities all around the world are converging. All the better universities know that they have to have strong science and engineering faculties to get any kind of global recognition. Equally importantly, the language of science and engineering is a global language. The laws of physics apply equally in all corners. Hence, the global spread of education in science and technology is another major driving force in the creation of one world.

Together these forces have created common values. Here again, without either a great plan or a common strategic map, humanity is moving toward creating a set of common values. This does not mean that humanity will become homogeneous. We will continue to worship different gods, enjoy different cultures, eat different foods, marry in different ways, and so on. Global diversity will not disappear. Indeed, with the resurgence of long-dormant cultures and societies, especially in Asia, cultural diversity will grow.

Yet even while we retain our different cultural and religious identities, we will converge on some important and fundamental values. Several philosophers have noticed this trend. Peter Singer has remarked that “the communications revolution has spawned a ‘global audience’ that creates the basis for a ‘global ethics.’” Self-identification with the nation creates a national morality, whereas identification with the world would create a global morality. Amartya Sen has also made reference to our trans-border “multiple identities — ethnic, religious, national, local, professional, and political.” The best example I can think of as a common value is the rule of law. Here, one of the biggest global revolutions of all time has taken place with scarcely a murmur: the substitution of rule by law with rule of law. And what is the key difference between rule by law and rule of law? Rule by law means that the general population obeys the laws of the land but the rulers (whether they are hereditary monarchies or absolute dictators) remain above and are not subject to those same laws. By contrast, under the rule of law, everyone in society, rulers and ruled, is subject to the same laws. There are no exceptions.