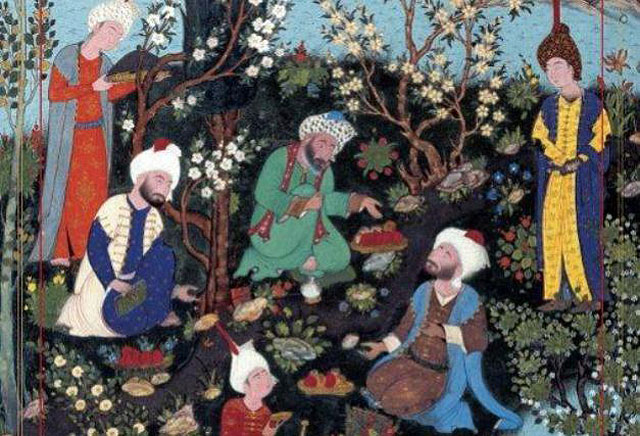 Detail from "Ferdowsi encounters the court poets of Ghazna," from the Shahnameh of Shah Tahmasp, ca. 1532, attributed to Aqa Mirak (Aga Khan Trust for Culture). Featured on the cover of "The World of Persian Literary Humanism" by Hamid Dabashi (Harvard University Press, 2012).

Columbia University Professor Hamid Dabashi's latest book, The World of Persian Literary Humanism (Harvard University Press, 2012), tells the story of Persian literature over the last 1400 years. Dabashi has taken great care to cast this narrative within the framework of adab, which he has defined as "literary humanism."

The word adab is Persian, but carries meanings in Arabic, Urdu, and Turkish. In Arabic, for example, the word means good manners, in addition to belles-lettres. In Urdu, adab carries the Persian and Arabic meanings related to literature, but the word adaab is even used as a common greeting. By engaging with adab, Dabashi deftly argues for a new theory of Persian literary humanism, rather than one that is informed by nativist literary historiography or Orientalist notions of Persian literature. He explores Persian adab's relationship to Arabic scholasticism and its development in Central and South Asia. Above all, he elucidates how Persian literature has perpetually asked the question: "What does it mean to be human?"

Dabashi appears at Asia Society New York on Thursday, November 29 for a discussion of his book with Firoozeh Kashani-Sabet, Professor of History at the University of Pennsylvania. (For those who can't attend the program in person, a free live video webcast will be available on AsiaSociety.org/Live at 6:30 pm ET.)

Asia Blog reached out to Dabashi via email ahead of the November 29 event to discuss some of the critical questions his new book raises.

You are absolutely correct that the term adab resonates in many contexts and languages — and my contention has been to liberate it from any ahistorical limitation within any particular postcolonial nation-state and relocate it where it belongs, within successive empires in which it has had reasons and rhetoric to flourish. Casting the term adab as "literary humanism" and placing it adjacent to Islamic scholasticism has enabled me to propose the scope of the project I have undertaken in this book — geographic, temporal, textual — as definitive to an alternative mood and mode of being not just a Muslim, but a human being.

Navigating through 1400 years, multiple empires, varied genres, all the way to the fateful encounter with European colonialism, this idea has given me an opportunity to rethink the central tensions and resolutions of varied cultures all the way from the Indian subcontinent through Central Asia, Iran and Asia Minor. The new understanding thus in effect tackles and overcomes the twin obstacles of Orientalist and nativist literary historiography (with which Persian literature has been habitually read) as well as the equally flawed marginalization of what North American literary theorists call "World Literature" — surpassing them and thus reclaiming the cosmopolitan worldliness of Persian literary humanism.

One theme throughout The World of Persian Literary Humanism is the position of Persian literature vis-à-vis Arabic. How did Persian and Arabic literary cultures converge and diverge? What is the significance of re-examining Persian's relationship to Arabic?

Persian begins as the language of a people that were conquered by the Arabs and were subject to Arabic literary imperialism and then eventually itself become an imperial language. It is the relationship between language and empire that interests me most. The other aspect to be noted here is the sacred disposition of Arabic as the language of Qur'anic revelation that made it particularly significant for Islamic scholasticism, which fact was not pertinent to Persian that was linguistically free to cultivate its literary humanism free from any sacred presupposition.

Adab has an equally illustrious history in Arabic, Turkish, and Urdu — all with variations of their own on the theme, and in the course of my book I have occasions to talk about the variations. So you might say while my teacher, the late George Makdisi was concerned about pulling Arab humanism westward to compare it with "the Christian West," my concern has been to draw attention eastward, where Persian humanism emerged.

Persian literature most often evokes the names of the great poets, Sa'di, Hafez, and Rumi. But as you explain, Persian is a cosmopolitan language whose literary reach extended beyond Central Asia. How did South Asian Persian writers contribute to the literary innovations of adab?

To me, South Asian and Central Asian contexts of Persian literary humanism are not incidental or afterthoughts that need to be evaluated for what they did or did not contribute. I follow the course of Persian literary humanism in multiple empires that include those of South Asia (the Mughals in particular) — and thus attend to the poets and literati (whether born and bred in South Asia or traveled there from elsewhere) for the particular spin they put to what I consider their own historic heritage.

Persian was and remains a South Asian language. This is a radically different perspective than assuming Persian language was the prerogative of any particular postcolonial nation-state and then South or Central Asians had contributed to it. In the Mughal period what is important is the resurgence of Persian prose and poetry in a new imperial context, while in Central Asia and in Iran different events are taking place — the height of Safavid painting in Iran and the encounter with Russian literature in Central Asia. The sites of two of the greatest imperial contexts of Persian literary humanism — the Timurids and the Mughals — were in Afghanistan and in India, so we must radically reconfigure how we think of Persian language rather than the way postcolonial nation-states have categorically claimed it for one country or another.

You write, "To Persian literati, European imperialism was an immaterial empire at whose epicenter — its cosmopolis, its London, Paris, or Madrid (instead of its Isfahan, Herat, Delhi, or Istanbul) — they were not welcome, for Persian literary humanism was no longer the lingua franca of the imperial imagination." How did Persian literary humanism change and adapt to its later encounter with European imperialism? Were Persian writers able to preserve Adab's playfulness and subversiveness in this later context?

Of course they did, and in multiple and varied ways. This is the period that I term "chaos" — where Persian poets and literati exited their habitual court but did not find any welcoming position in the European imperial courts and thus entered into what they now effectively created as a public space that they called "vatan/homeland." This is an exceedingly exciting and prolific phase because Persian literary humanism has to come to terms with alterities that are not of its own making. The central trope of literary humanism in turn changes to adapt to the new environment and thus radically expanded its public sphere.

We're curious to know how or if contemporary Persian writers draw on classical Persian influences. Would you argue, for instance, that Persian literature continues to pose the question of what it means to be human?

It does — but its defining moment is no longer ethnos, logos, or ethos—but chaos—following the typologies that I suggest, and its site of operation is no longer the royal court but the public space.

In the final chapter of the book I trace these manifestations in film, drama, fiction and poetry. But to come to this point I have guided my readers through a thematic periodization of Persian literatures as it moves from ethnos to logos to ethos and now comes to chaos as its defining trope. By doing so I posit a de-centered knowing subject at the heart of a multifaceted literary humanism that generation after generation of poets and prose stylists have internalized and moved forward. As such, my project dismantles both the nativist and the Orientalist narratives, seeking to rescue Persian literary humanism from such constitutionally distorting modes of knowledge production and bringing it back to life ultimately as a theory not of an alternative modernity but in fact as an alternative theory to modernity.