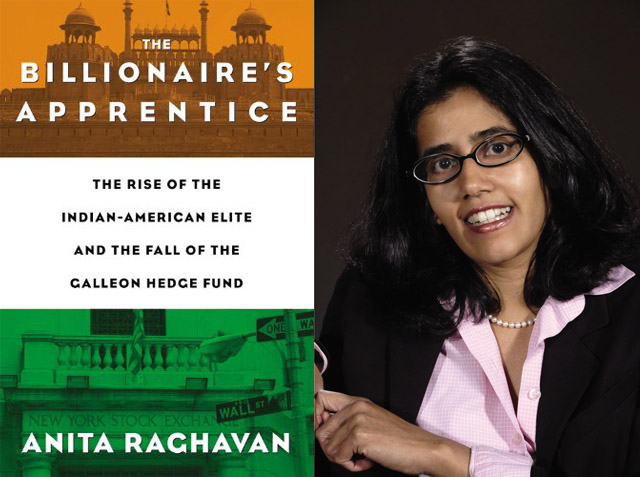 "The Billionaire's Apprentice" (Business Plus, 2013) by Anita Raghavan (R).

Anita Raghavan is a former award-winning Wall Street Journal reporter and author of the newly published The Billionaire's Apprentice: The Rise of The Indian-American Elite and The Fall of The Galleon Hedge Fund. A veteran financial reporter, Raghavan plays the role of detective in her new book as she uncovers the collapse of a $7 billion hedge fund due to an insider trading scandal and the Indian American duo — hedge fund manager Raj Rajaratnam and Goldman Sachs executive Rajat Gupta — who were behind the compelling insider trading scheme. (For further insights into The Billionaire's Apprentice, listen to Raghavan's author interview on NPR's Morning Edition earlier today.)

Raghavan, a contributor to Forbes and the New York Times Dealbook, will speak at Asia Society New York this Thursday, June 6. (For those who can't attend in person, the program will also be a free live webcast on AsiaSociety.org/Live beginning at 6:30 pm ET.) Via email, Asia Blog checked in with the author ahead of her Asia Society appearance.

Had the 2008 economic meltdown not happened — with all the attendant scandals such as Bernard Madoff and the public outcry against Wall Street bailouts — do you think Rajaratnam and Gupta would have received less severe sentences?

No — in fact, a number of people commented in newspaper articles after the Gupta sentencing that he was let off easily. Gupta, as a member of the board of directors of Goldman Sachs and other companies, had a fiduciary duty to keep information confidential. Rajaratnam had no such fiduciary duty. The only allegiance he owed was to his investors and, by all accounts, they did well despite Rajaratnam's trading on inside information.

I think the prison sentences each man received largely reflect the views of the respective judges on the federal sentencing guidelines. Someone like Judge Rakoff, who presided over the Gupta case, is known to veer from the guidelines quite often and not penalize criminal defendants who take a case to trial.

Now, if you asked me, Did the economic meltdown affect how all these cases played out before juries, I would say absolutely yes. It is not a coincidence that the government has scored home run after home run in the insider trading cases it has brought in the last several years. In fact, if I were a white-collar defendant today, I am not sure if I would even bother taking a case to trial. I am surprised so many do. It's one of those rare instances where having more money doesn't necessarily mean you make the right choice for yourself.

The Indian immigrant has come of age. Your afterword suggests this story illustrates that Indian Americans are no longer a "model minority" but have produced heroes and villains, i.e., Gupta and Rajaratnam vs. Wadhwa and Bharara. Is there still a strong feeling that the lawbreakers have "let the side down" or even, in the words of Procter & Gamble's Gurcharan Das, "stained the India story?"

I think behind closed doors among South Asians there is a lot of hand-wringing about the missteps by Anil Kumar, who pleaded guilty to giving inside information to Rajaratnam in exchange for monetary payments, and Rajat Gupta, who at the very least appeared to speak freely about Goldman boardroom secrets to a short-term trader. And the grave concern is that the magical reputation that Indian American managers have enjoyed for so many years in the U.S. will fade. I remember when this case first started and I decided to write a book about it, a prominent Indian executive in the financial services industry plaintively asked me: Anita, why do you have to write this book?

Is there a generational aspect here, with older immigrants seeing the story differently from those who are American-born? Is this a sign of assimilation?

I definitely think there's a generational element to this story. All of the prominent South Asian immigrants charged in the case were first-generation and, of course, Preet Bharara, the Manhattan U.S. Attorney whose office brought all these cases, grew up in America. (He was actually born in India and came to the U.S. as a toddler.) There's an interesting moment in the book when Gupta is indicted and the indictment is unsealed on Diwali, which of course is the holiest day for Hindus, and Preet confessed to some colleagues that his father telephoned him that day and asked him why he brought the case on Diwali. And Preet replied that he didn't know it was Diwali. I think that exchange between father and son says it all. With the first generation, there is this deep tie to India and its customs and traditions but among the generation of Indians that were born and/or bred in the United States there is no such tie. If anything, they are more American than Indian and they embrace American notions of law and order.

Can you speak on the effects of the scandal on the general opinion of India and Indians in America? In your covering the story, what changes did you notice in this opinion?

I think this scandal has been difficult for Indians in America. I was struck when the New York Times ran an adaptation of my book in its Sunday Magazine a couple of weeks ago that there were a few comments from people that smacked of racism. So in that sense this case has not been good for the community — it has brought to the fore these latent feelings of racism and in a sense given them legitimacy, which is always dangerous.

However, I think the case itself underscores the diversity and vibrance of the Indian community in America today. There are three million Indians in the U.S. today and they are not all doctors and engineers and college professors as they were when I was growing up in the '70s. They are politicians, movie-makers, and lawyers, and we are even coming to a time — if Sri Srinivasan gets approved for the federal appeals court — where we could see an Indian Supreme Court justice.

It looks like Anil Kumar, who avoided jail by helping convict Rajaratnam and Gupta, is rebuilding a career in India. Do you think that India can offer a second chance to some of these people?

Absolutely. In fact, I was talking to someone who had just returned from India, a Westerner, who remarked that it was interesting that while the view in the U.S. of Rajat Gupta was one of great disappointment, he said he could very well see Rajat Gupta return to India as a hero — someone who had a noble career in the United States and was derailed by a not fully fair U.S. justice system.

It's no secret that corruption is an endemic problem at the highest levels in India and many Indian businessmen view the charges against Gupta as a speeding ticket — nothing more. Just like Anil Kumar has found a place in India working for his fellow Doon school chum, Analjit Singh, at Max India, I could easily see Gupta coming back and re-establishing himself.

You covered this story for the press as it developed. Which themes had already emerged then, and did other themes emerge once you started writing the book?

Well, let me answer the question this way: I think the elephant in the room about this story from Day One was the number of South Asians who were caught up in this case. However, I think the mainstream press, for fear of accusations of racism, stayed away for the most part from this theme. I think one of the things I was able to explore in the book, because I am Indian and am part of the community, is how these close ethnic ties may have led to relationships that you probably wouldn't even see in India. Raj Rajaratnam and Rajat Gupta would have been an unlikely duo in India but the South Asian business community in the U.S., while large, is still far smaller than in India and the two men were able to find common ground in their success.