The Implications of Modi's Visit to the U.S. | Asia Society Skip to main content

The Implications of Modi's Visit to the U.S. 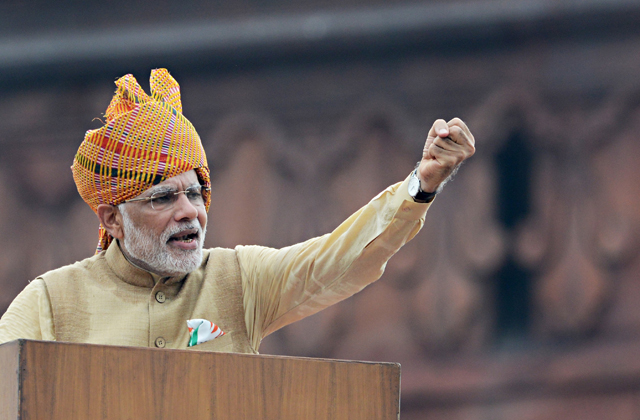 India Prime Minister Narendra Modi is visiting the United States on Monday, where he will meet with President Donald Trump. We asked three of our friends from the Asia Society Policy Institute to comment on the implications of this visit.

Modi's visit couldn’t come at a more opportune time. President Trump badly needs both an opportunity to bolster his presidency and a clear achievement to add to his win column. In India, Trump has a natural partner, and in Modi, he has a leader he can truly work with.

Modi recently completed a very successful trip to Europe, visiting Spain, France, Germany, and Russia. His visit garnered positive press as he showcased an India that was open for business, ready to take on greater global responsibilities and embrace its European partners. Trump and Modi have an opportunity to craft a similarly lauded and productive visit.

Trump and Modi will use this first visit to build trust and get to know one another. They can begin on the right foot by communicating their desire to advance the relationship to new heights. Modi, who has steadily moved India closer to the United States in his three years in office, is well positioned to take the relationship further after consolidating political power in India through big victories in recent state elections in India. He is strongly situated to win re-election in 2019, and, therefore, shape India’s path over the coming years. The United States should take advantage of his good standing.

The visit’s success will depend on whether the Trump Administration has been able to focus enough of its attention on India to decide whether and how it will seek an upgrade in the relationship. It will also depend on whether the White House can reassure India about some of its major concerns.

The two leaders should ensure that legitimate disagreements on certain issues, including worker visas and intellectual property rights, do not hold the relationship back. There is strong bi-partisan support in the U.S. Congress for a closer partnership with India. India’s fast-growing and increasingly more open economy are huge opportunities for the United States. Additionally, Delhi can serve as a vital partner for Washington in the Asia-Pacific region. For all of these reasons, pursuing stronger ties with India would be a clear win for the Trump administration.

Some areas of cooperation are clear. The countries should continue building on their defense relationship and should seek ways to enhance counterterrorism cooperation, especially as this is a major focus for the Trump administration. On the strategic front, the United States should encourage India to enhance its engagement in the Asia-Pacific. Trump can help facilitate this by telling Modi that the U.S. will finally support India’s membership for the Asia-Pacific Economic Cooperation (APEC) forum. Finally, the two leaders can commit to strengthening economic ties by agreeing to a genuine dialogue on enhancing trade or negotiating a bilateral investment treaty.

Security and Defense Are Bright Spots for India-U.S. Relationship

The Trump/Modi meeting will be an important one for both nations and a chance to establish a positive rapport between leaders of two of the world’s largest democracies. Prime Minister Modi, for his part, will likely have learned several lessons in observing Japanese Prime Minister Abe and Chinese President Xi Jinping’s visits to Mar-a-Lago earlier this year. He will, therefore, want to position himself as a strong and pragmatic leader, one with whom Trump can do business. Given the uncertainty surrounding the Trump administration’s Asia policy, and in particular, U.S. strategy in South Asia, Modi will also want to remind President Trump of the significance of the U.S.-India strategic partnership and of the U.S. commitment to long-term stability in Afghanistan.

While Trump and Modi may have challenging waters to navigate on the economic front, especially regarding trade deficits and visa issues, a bright spot in their conversation is likely to be the security and defense relationship. The most notable deliverable likely to emerge from the visit is the announcement of the U.S. decision to sell India 22 unmanned Guardian drones, a request which had been at the top of Prime Minister Modi’s wish list. If approved, India will become the first non-NATO country permitted to purchase the high-tech drones. This deal, combined with Lockheed Martin’s recent announcement of a new joint venture with Tata Advanced Systems, signifies the rapid growth of U.S.-India defense ties over the past decade. Perhaps most importantly for the White House, and Prime Minister Modi, it will provide the president with a high dollar figure deliverable — the estimated value of the deal is around $2-3 billion — which would undoubtedly help set a positive tone on both sides and smooth the path for closer cooperation going forward.

India Is the Indispensable Country for Addressing Climate Change

India embodies the core climate debate about how much emerging economies should rely on fossil fuels for their development needs, and few — if any — things are more important for addressing climate change than India’s energy future. India is the world’s fastest growing major economy and fourth largest greenhouse gas emitter. Its emissions grew by roughly 67 percent between 1990 and 2012, and under a business-as-usual scenario would likely climb 85 percent higher by 2030. It also has relatively little culpability for the current climate dilemma compared to its large country peers, accounting for only one-eighth of U.S. and China’s combined cumulative emissions since 1850. India's pronounced development deficits both reflect and stem from its low emissions per capita of about two tons of CO2 equivalent, compared to 20 tons and eight tons in the U.S. and China, respectively. Facing these deficits requires expanding access to energy across the subcontinent, and how India pursues this task will help make or break international efforts to reach the goals of the Paris Agreement on climate change.

India will aggressively transition away from fossil fuels only if doing so makes strategic and economic sense to the country’s political and economic leadership. There are promising signs. India is ambitiously bringing solar and wind power online, funded in part by President Modi’s doubling of a coal tax. India Power Minister Piyush Goyal has called for hundreds of billions in clean energy investment, increased the previous government’s 2022 solar power generation target five-fold, and seeks to double wind power by that same year. Government actions support the view that it sees clean energy is an opportunity space.

Nonetheless, the continuing lure of available coal, major transmission and infrastructure issues, and graft and inefficiency in power and transportation sectors ensure that even best-case scenarios see India emissions that are likely decades from peaking. Accelerating its transition to a cleaner energy future — as Modi makes clear at every opportunity — will require substantial international support. It remains to be seen if such support is in the offing.