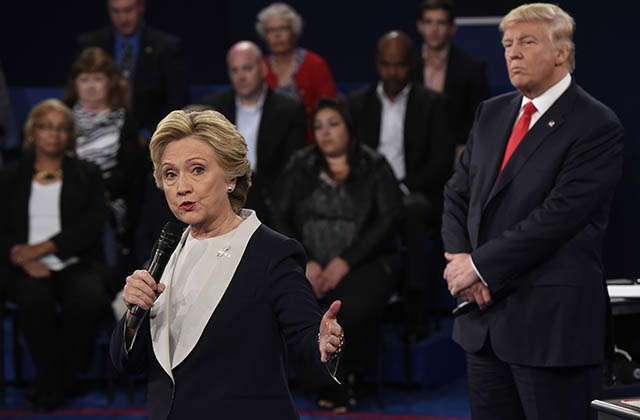 During the 2012 U.S. election cycle, women’s rights came to the fore when issues including abortion, birth control, workplace discrimination, and sexual assault became key issues in a number of races. Democrats frequently invoked the concept of a “War on Women” to portray Republicans as regressive on these issues, and ultimately, Democratic presidential candidate Barack Obama won the female vote by 12 percentage points while Republican Mitt Romney won men by eight. It was the largest presidential election gender gap to date … until the 2016 race when Hillary Clinton won women by 14 percentage points and Donald Trump won men by 12.5.

University of Houston political scientist Elizabeth Simas researches voter and candidate behavior in U.S. elections with a focus on stereotyping and modern sexism in recent presidential races. On January 31st, she’ll appear on a panel at Asia Society in Houston comparing female political participation in the United States and Asia. Ahead of the event, she spoke with Asia Blog about the influence of sexism in American politics and how it unfolded in the recent election.

You’ve written about the distinction between “traditional sexism” and “modern sexism” in politics. Can you explain the difference?

On Tuesday, January 31, Asia Society in Houston will host a panel titled "Bridging the Gender Gap: Female Politicians in Asia and the United States."Learn more

When we say traditional sexism we're talking about things like "women belong in the kitchen" or saying they should just be teachers and nurses. We’ve found that fewer and fewer people, whether because they don't believe it anymore or they just don't find it acceptable to say they believe it, will say outright that they subscribe to these strict gender roles.

Our society has evolved. Women have a variety of careers and in general you don't necessarily see the same attitudes that we saw in the 1950s and 60s, but there's still sexism. However, it's not as overt. It's a little bit subtler and more about denying the existence of discrimination against women. This is people who say women don't have it any harder. And from that comes a second aspect of modern sexism: resentment. Some people will say if there's a special program in place to encourage the hiring of women, that's special treatment and that's not fair.

So people may say, “I'm not a sexist, I don't think women belong in the kitchen, but I don't support affirmative action hiring.” This has the same outcome [as traditional sexism] but it’s coming from a little bit different of a place.

How does this play out in American politics?

We’ve seen historic gender gaps in recent elections, and a lot of the focus seems to be on people saying the Republican Party has a problem with women. The Republican Party itself said this when looking back at Romney’s loss in 2012. They decided that they needed to appeal more to female voters.

But there's a flip side to that: When you are overtly appealing to issues that relate directly to women, there's a possibility that you're alienating people. Women's issues are everyone's issues to a certain extent, but when you tailor a message to one specific group — whether it's a racial group, an age group, or a gender — you run the risk of alienating the people who don't belong to it. It’s like when young voters feel alienated when all they hear politicians talking about is social security.

So as it pertains to modern sexism, some men who are in the workplace with women, for instance, might say, “Well I have a female boss, I have female coworkers. I don't see this as a huge problem. Why are my politicians talking about this? I want them to be talking about what they're going to do with the economy.”

This is something we’re looking at. We can't really get at the causal mechanism, but there's some evidence to suggest that the effect of modern sexism was there among more liberal men. Some people that would normally be more inclined toward the Democratic Party were maybe pulled a little more toward Romney in 2012.

How would you compare the role of sexism in the 2012 presidential election to the 2016 election?

I would say it's very different, because even with the “War on Women,” 2012 was still really about policy — about issues like abortion and birth control. I think in 2016, it became more personal. It went beyond each party's issue stances. With Trump’s comments toward Megyn Kelly, then the Access Hollywood tape, it became very personal.

Some people can separate policy from candidate: “Oh that's just a religious belief or that's a policy belief, that's not an attitude toward the gender.” But women took these comments more personally. Obviously, you also have to look at the historic nature of actually having a female presidential candidate. That also comes into play.

How much do you think sexism had to do with Clinton’s loss?

We’re still trying to figure that out. It's really hard because sexism tends to be correlated with conservatism and correlated with a number of other factors that predict Republicanism. It's hard to separate how much was sexism and how much was because she’s a Democrat and liberal. There's also the fact that she was a candidate that came with some baggage and some history. It's quite possible that any candidate, male or female, who had her background and her exact set of circumstances may have faced much of the same dislike.

I don't know that I'd go so far to say it was sexism that lost her the election, but I do think she was faced with complications because there are certain people in this country uncomfortable with a woman taking on this role for the first time. I think we do evaluate female candidates in a different way than we evaluate male candidates. So she probably faced a set of criteria that male candidates don't.

A report came out this week looking at “implicit bias” in the election — like the unconscious tendency to associate men with careers and women with family. It noted that this bias was particularly strong among women who supported Trump. What do you make of this?

That does stumble on something interesting: Sexism is not an exclusively male phenomenon. There are a lot of women who are sexist. I've seen other similar studies, like one on teaching evaluations. They had an online class where they told one set of students that the instructor was male and the other set that the instructor was a female. They never had face-to-face interaction, and at the end they gave teaching evaluations.

The students rated the female professor lower, and the difference was biggest among the female students. Sexism is strange in that way. With racism, it's typically in-group vs. out-group and you don't find in-group members showing bias against their own in-group, but with sexism, men and women have biases against women.

In spite of Clinton’s loss, there are now a record 21 women in the U.S. Senate. Do you think this will ultimately make the path to the White House smoother for the next woman who runs?

The number of women of color in the Senate also quadrupled because it went up to four. There’s a historic number but it's still well below being proportional. The numbers aren't anywhere close to being proportional to the population.

I think to be the first is always going to be the biggest hurdle. Once someone has cracked the glass ceiling, it's easier to push your way through. The first person is always going to face the biggest hurdle. But I think the more women we can get into lower offices, the more comfortable people will become with the idea of female leaders and I think some of these implicit biases can be broken down.

Some countries, like Indonesia, Rwanda, and Ecuador, have requirements that a certain percentage of political candidates or the legislature have to be female. These countries have elected female executives and I think there is a relationship because it normalizes this behavior that people think isn't feminine. So it helps break down some of those biases.