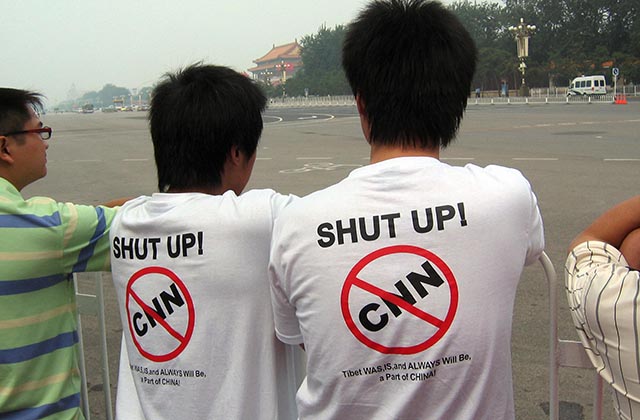 Chinese authorities recently escalated their ongoing crackdown on foreign media when they asked Apple to remove New York Times news apps from its iTunes store, a request to which Apple complied.

In recent years, in an ongoing censorship drive, websites for outlets including Reuters, Bloomberg, the Wall Street Journal, and the Financial Times have also been blocked by government censors in tandem with a domestic crackdown on dissent and government fears of social instability, Western ideological infiltration, and threats to national security.

But in their effort to scrub the Chinese web of content from these outlets, China’s censors may be unwittingly robbing themselves of an opportunity. Recent studies have suggested that exposure to uncensored foreign media may actually help endear Chinese people to their country and government by giving them a more complex image of life abroad and reinforcing a state-driven narrative of “hostile foreign forces” besmirching China.

On Wednesday, January 18, Orville Schell and Daniel Rosen will discuss how the incoming Trump Administration will approach China policy. The program will be available worldwide via a free live webcast.Learn more

“I think censoring foreign media could be counterproductive,” said Haifeng Huang, a University of California, Merced political scientist. “They're concerned about critical political reports in those outlets, but their effect on Chinese is more mixed than the Chinese government believes. It doesn’t realize that other types of Western media reporting might positively affect people’s perception of the government.”

For a forthcoming British Journal of Political Science paper, Huang ran a complex experiment that surveyed 1,200 Chinese respondents anonymously on attitudes toward the Chinese government, Western countries, and news consumption, and presented them with articles from Western media including New York Times and Wall Street Journal on topics related to housing, healthcare, and education. Respondents then underwent another round of surveying with new questions on socio-political attitudes.

The results showed that respondents were significantly more interested in reading articles that reflected positively on foreign countries and negatively on China — something especially true for those who came into the experiment with high opinions of Western countries and critical attitudes toward the Chinese government. Counterintuitively, respondents’ views of the Chinese government tended to become more positive after exposure to foreign media articles — even if the articles ostensibly reflected well on the foreign countries they reported on.

Huang explained this is likely because Chinese are often exposed to overly rosy and romanticized images of the West on the internet. Real estate, for instance, is an issue of great concern for many Chinese, since years of runaway speculation has left China’s cities with out of control housing prices. Simplistic articles on Detroit’s devastated real estate market that report houses “as cheap as a pair of shoes” without the messy nuances, therefore, spread quickly on China’s internet. Even the Communist Party mouthpiece People’s Daily has touted fawning reports of the situation abroad, like that of a woman who sold her small Beijing apartment and was able to buy six houses in Houston with the proceeds.

“There’s also a lot of misinformation in China that exaggerates the hardship of life in foreign countries,” Huang said. “But such reports are less popular and less believed.”

He noted that self-selection is particularly important in gauging the influence of foreign media in China. Respondents most inclined to seek out foreign media reports are those who already have good impressions of life abroad and more critical stances toward the situation in China. They’re therefore especially likely to have their expectations tempered.

“Chinese come across more realistic impressions in mainstream credible Western media reports, at least with regards to socioeconomic situations,” Huang said. “They find that actual life in the West is more complicated than they thought, which gives a more positive image of their own country after the exposure.”

The inclination to believe Western media reports may not be as acute in political contexts, though. A separate Princeton study published last year surveyed more than 3,000 Chinese internet users on their perceptions of bias and trustworthiness of both domestic and foreign media outlets.

Respondents were generally skeptical of all media’s credibility: On a scale of 1 to 5, no outlet — Chinese or foreign — received an average trust score much higher than the midpoint of 3. On the whole, respondents believed that the prominent Communist Party mouthpieces of People’s Daily and Xinhua harbor the strongest pro-Chinese government biases, and foreign outlets like New York Times, Reuters, and BBC have the strongest anti-government biases. Critical market-driven Chinese outlets like Southern Weekend were rated in between, with a bias that still slants in favor of the government.

The surprising finding, however, was that the state-run sources were also deemed by far the most trustworthy, despite the fact that respondents recognized that they were the most biased. This is likely, the study said, because people are most familiar with those outlets’ brands and content. “Chinese citizens may trust official outlets in part because the mouthpieces provide reliable information with a familiar, predictable slant,” the study noted. “Savvy consumers can ‘back out the bias’ from the reliably slanted official papers.”

An additional explanation is that those papers’ strong pro-China and pro-government biases affirm readers’ pre-existing beliefs. On an open-ended portion of the survey, one respondent said of People’s Daily that “We can see our China’s latest brilliant development achievements.” Another respondent wrote, “The pro-government ideology [of domestic media] is very strong, but China needs this kind of atmosphere.”

Foreign media outlets, on the other hand, were deemed the least trustworthy and largely viewed as distant and lacking knowledge of China’s national conditions. “The foreign media appears objective, but in fact, the bias is relatively obvious, it’s generally to reject China, and discriminate against China,” wrote one respondent. “Foreign news is untrustworthy. They attack our country’s system; they want us to be chaotic so they can obtain the advantage,” wrote another.

These sentiments are in line with a general discourse in Chinese state media that presents Western media as hopelessly biased and harboring malicious intent toward China. Incidents of genuine misreporting on China by foreign media tend to be pounced on by official outlets. This is on top of a more general narrative in education and media that stresses historic “humiliation” of China at the hands of foreign powers that are constantly trying to thwart the country's rise. In a New York Times interview last year, the popular Chinese blogger Han Han speculated, “Even if every American website could be accessed here in China, Chinese would be just as nationalistic, or even more so.”

Several occasions when foreign media reports have garnered wide attention within China suggest that he might be right. In 2008, riots broke out in Lhasa, Tibet after police broke up a gathering of Buddhist monks, which was subsequently suppressed by authorities. Critical foreign media reports — some of which included errors like photos mislabeled as Chinese police arresting Tibetan protesters — prompted a fierce reaction in China. A popular website called Anti-CNN.com sprang up with the aim of “identifying the lies and distortions of facts from the Western media.” A t-shirt that appeared widely in urban areas at the time read “SHUT UP CNN! Tibet is, was, and always will be a PART OF CHINA!”

Similarly, in 2015, after writing a commentary critical of Chinese authorities’ treatment of the Uighur minority in Xinjiang province, French journalist Ursula Gauthier was targeted by a raft of state media attacks and was ultimately expelled from China — which, anecdotally, much of the Chinese public appeared to support.

The Princeton study noted that young Chinese and people who use censorship circumvention tools like VPNs were less inclined to believe in official state media, so dynamics may shift in the future. But for now, pro-government narratives and state media support appear to be dominant among the public.

“With respect to China’s political system, the findings raise serious doubts about the liberalizing impact of foreign and critical commercial media,” the study concluded. “It is possible that critical foreign outlets even buttress the authority of the CCP regime, feeding into the narrative that China’s rise is being constrained by ‘hostile foreign forces.’”