Experts: Mixed Reactions to Mixed Signals from North Korea's Leader and Its Media 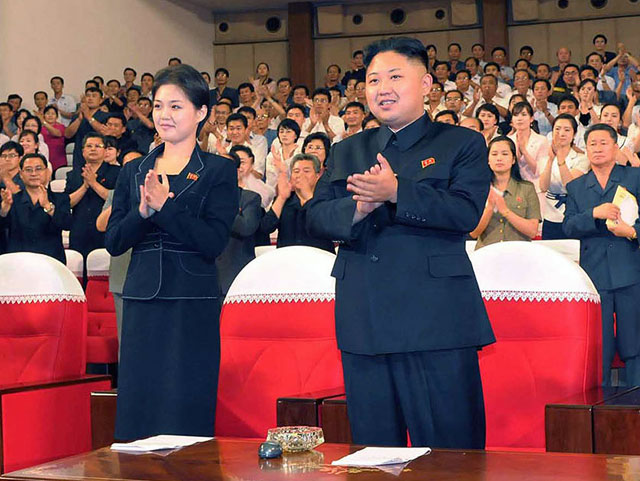 North Korea has been in the news frequently these days, most recently for its spectacular gold medal in weightlifting at the Olympics. Much less talked about, however, was the emphatic dismissal by North Korea's state news agency, KCNA, of rumors that the country's present leadership might be possibly breaking away from the past.

These rumors came in light of Kim Jong Un's decision to remove his top military chief, Vice Marshal Ri Yong-ho, and install himself as marshal of the military, a move that led some commentators to speculate that this power shift could signal a possible economic reform.

Yet, as KCNA stated on its website: "To expect 'policy change' and 'reform and opening' from the DPRK is nothing but a foolish and silly dream just like wanting the sun to rise in the west."

Given the incongruity between the official media's hard-line stance of "no reforms" and what appears to be happening on the ground, Asia Blog asked two experts on North Korea — Asia Society Associate Fellow Charles K. Armstrong, Director of the Center for Korean Research at Columbia University, and Kongdan "Katy" Oh, Non-Resident Senior Fellow at the Brookings Institution — for their opinions as to what is, or is not, happening there right now.

There have been reports recently of Kim Jong Un's "opening up" North Korea to "Western" influences: recently a concert featuring Disney characters such as Mickey Mouse and Winnie the Pooh was held for the young leader, and he reportedly eased restrictions on Western products like french fries, pizzas and cell phones. How much truth is there to these reports? And what, if anything, should the outside world read into these actions?

Armstrong: Disney characters have been appearing on children's clothing in North Korea for years. Western culture does not necessarily mean political opening. Cell phones are abundant but they do not connect to the outside world, and there is still virtually no Internet access. So North Korea's "opening" has a long way to go.

Oh: Kim is just accepting the economic reality. He cannot stop people using cell phones and drinking beer, eating pizza. Regarding the Disney concert, he wants to be loved by younger people as a new leader. But obviously North Korea did not get the right to use Disney symbols. The world needs to watch without putting [in] too much interpretation.

Compared to his predecessors, are any of Kim Jong Un's acts of "opening up" out of the ordinary? In what ways is he different? In what ways the same?

Armstrong: The propaganda is still couched very much in terms of continuity with the old system. For example, Kim Jong Un is referred to to as "The Sun of Songun [Military-First] Korea." But shake-ups in the leadership, especially the military (most dramatically the removal of Vice-Marshal Ri Yong-ho) suggest that Kim Jong Un's regime will be less beholden to the military old guard, and may be preparing for significant reform. But right now it's too early to tell.

Oh: Kim may want some changes different from his father, but it is too early to declare strategic changes in terms of reform.

As Kim makes waves in the press with his new theme song, his new wife, and seemingly new developments in the nation's infrastructure, how have his moves been greeted in North Korea?

Armstrong: There is no such thing as "public opinion" in North Korea but pro-Kim Jong Un propaganda is in full swing throughout the country, and conditions in Pyongyang appear to be much improved — people are well-dressed and well-fed, lots of luxury cars on the streets, new high-rise apartments built in the last year, many more children roller-blading, etc,. indicating a new level of affluence in the capital. I would think that Pyongyang residents at least feel their material quality of life has gotten better under Kim Jong Un, and in that sense see him has a good leader. Like most people, North Koreans don't pay much attention to foreign affairs. Outside the capital, economic conditions are still quite bad, but in a highly centralized system like North Korea it's the elites who matter, and there's little reason for the elites to be dissatisfied with Kim Jong Un at this point.

Oh: North Koreans want a better economy and a better life. Now the key problem is that only the rich people can have cell phones and a better life while others live in fear and hunger. Consider this — North Korea has two societies: a rich capitalistic society and the other a poor agricultural society.

Armstrong, who just returned from a trip to North Korea, notices a stark difference between the elite and the proletariat.

Armstrong: As I mentioned above, the economic gap between Pyongyang and the rest of the country has become quite dramatic. The general mood, as far as
I could perceive it, is more confident and relaxed than I have seen in years.

There is a palpable relief that the mourning for Kim Jong Il is over, that the build-up to April 2012 is past, and people can now get on with their lives. Happiness is hard to judge, of course, but the general quality of life in Pyongyang appears much better. I saw people moving into the new 45-story apartment buildings near Mansudae, and the buildings appeared to be well-stocked with stores, pharmacies, etc. The countryside and secondary cities are another story. Kaesong and Wonsan appear to be doing all right, but Hamhung (North Korea's second-largest city, pop. 800,000) is still suffering from the de-industrialization of the 1990s, and the rural areas are obviously very poor. I would venture to say that the people who matter in the system (the privileged elite, especially in Pyongyang — perhaps 20% of the country) are happier now than in the Kim Jong Il period, and that the rest of the country is struggling but mostly stable.

On the other hand, however, John Delury, Asia Society Associate Fellow and professor at Yonsei University's Graduate School of International Studies in Seoul, believes that the recent developments in North Korea cited above unmistakably seem to suggest reform. In a July 26 article on YaleGlobal Online, Delury argues that Kim's actions are reminiscent of Deng Xiaoping's leading China out of isolation into a market economy.

Delury: An early sign that Kim would undertake governance differently than his father was the simple matter of giving a speech. While his father never let the people hear his voice, Kim Jong Un gave a televised oration in April, then another in June. Similarly, Kim has used the tradition of so-called on-site guidance visits, which put the Supreme Leader in direct contact with the North Korean people, to signal a new approach. His father's style on guidance visits was withdrawn, almost painfully awkward — as captured in the farcical website Kim Jong Il Looking At Things. The son is infinitely more at ease among his subjects. Instead of limiting himself to aloof observation, he interacts up-close with average people.

Although Kim is not yet talking about "market socialism," so far, he's leaving the small private markets alone, encouraging special economic zones and sending officials abroad for economic learning trips. Along with the new guest-worker program that will reportedly allow tens of thousands of North Koreans to go earn better wages in China, economic policy shows signs of increasing pragmatism, experimentalism and transparency — hallmarks of China's epic shift from Mao to Deng.