The "Great Successor" now has his very own theme song. It's been reported that North Korea has released the first official propaganda hymn dedicated to its new supreme leader, Kim Jong Un.

Entitled "Onwards Toward the Final Victory," the song (embedded above) has been broadcast repeatedly on North Korean state-run media outlets, such as the Korean Central Broadcasting Station and Radio Pyongyang, in an apparent effort to reinforce Kim's carefully cultivated image. The song plays several times a day, and North Korean paper Rodong Sinmun announced that it, naturally, has been enthusiastically received by the citizens.

The title of the song comes from the last phrase of Kim's April 15 speech, which marked the 100th anniversary of the birth of the country's founding leader, Kim Il Sung, Kim Jong Un's grandfather. Strong militaristic images appear throughout the song, emphasizing young Kim's determination to pursue his father's "songun," or "military-first," regime. We've translated — to the best of our ability — the lyrics to "Onwards Toward the Final Victory" below (please post any suggested changes in a comment).

Songs dedicated to North Korean leaders are common. For example, Kim Jong Il's signature tune, "No Motherland Without You," was broadcast frequently during his reign.

"The most striking difference with Kim Jong Un's is that his name is never actually sung in the song dedicated to him," said Asia Society Associate Fellow John Delury, a professor at Yonsei University's Graduate School of International Studies in Seoul. "So perhaps it can be thought of as the new official song of the Kim Jong Un era. Rather than focusing on the role of Kim Jong Un personally, the agents in the song are the North Korean people, Worker's Party and military."

And what to make of the phrase "the final victory"?

"I assume the final victory refers to reunification of the Korean Peninsula," Delury said.

The hymn comes amid Kim's efforts to portray himself a benevolent, fatherly figure, a stark departure from his father's strong but cold rule. Kim Jong Un has also reportedly relaxed rules on the consumption of Western products like pizzas, hamburgers and french fries.

And to all the musicians reading this, you're in luck. The score to "Onwards Toward the Final Victory" was released on Rodong Sinmun's site on June 26. We've published it below.

And now, the lyrics: 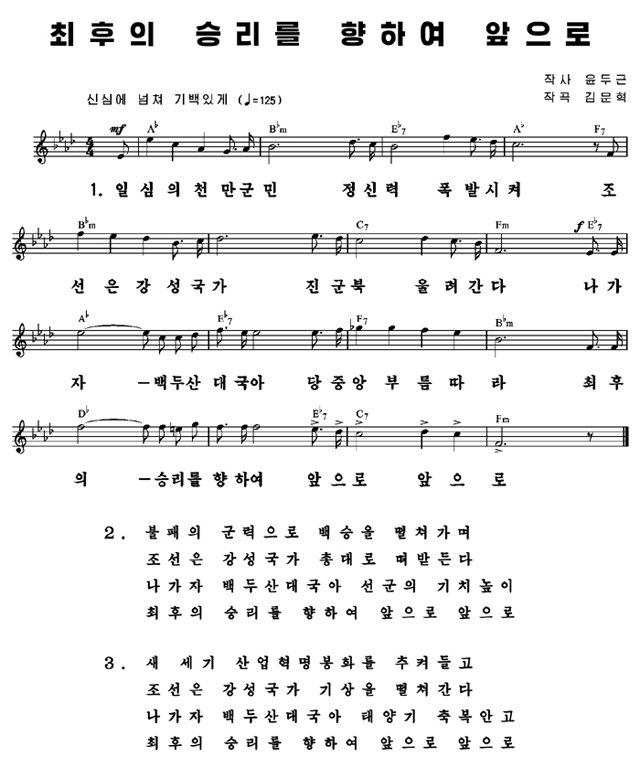