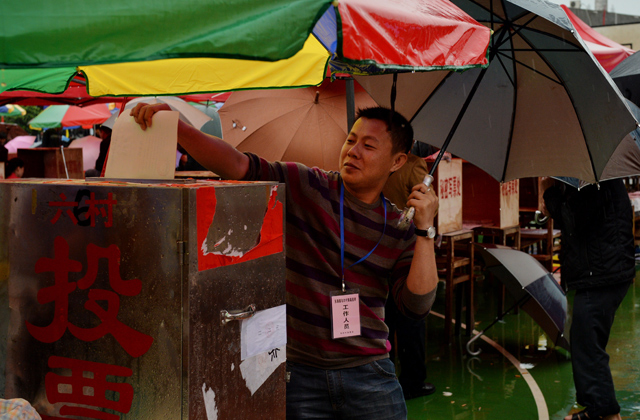 A local resident votes during elections in the village of Wukan on March 31, 2014. (Mark Ralston/AFP/Getty Images)

In the summer of 1989, political theorist Francis Fukuyama wrote in his famous essay “The End of History” that, with the conclusion of the Cold War, liberal democracy had emerged as the world’s only viable political system. “The triumph of the West, of the Western idea, is evident first of all in the total exhaustion of viable systematic alternatives to Western liberalism,” he wrote.

It’s easy to forget now, but over the next decade and a half, world events appeared to support Fukuyama’s thesis. Following the collapse of the Berlin Wall in November 1989, the former Warsaw Pact countries in Central and Eastern Europe transitioned from Communist governments to liberal democracies. Before long, they applied for and received membership to the European Union.

In the 1990s, a newly independent Russia held democratic elections and invited Western advisors to shepherd the country’s transition to a market economy. And while China appeared to buck this trend with the brutal Tiananmen Square massacre in 1989, many observers felt that the country’s eventual transition to an electoral system of government was inevitable. Following an earlier wave of democratization across Europe, Asia, and Latin America in the 1970s and ‘80s, the events of the early 1990s spread a belief that any country in the world would become a democracy — it was simply a matter of time.

Two decades later, this notion seems increasingly unfeasible. Democracy is struggling. According to Freedom House, the number of democracies has fallen since reaching a peak in 2006. The world’s non-democracies, meanwhile, have become more authoritarian. Russia, once a tentative democracy, is now under the control of Vladimir Putin, a nationalist leader whose regime has centralized power, targeted opposition journalists, and seized sovereign territory of other countries.

Then there’s China. For years, conventional wisdom stated that as the People’s Republic grew more prosperous, the country would naturally transition to a liberal democracy. But this prediction — dubbed the “China Fantasy” by the author James Mann — has not happened. If anything, China’s economic success has only further solidified the Chinese Communist Party: The current ruler, Xi Jinping, is widely considered to be the country’s most powerful since Deng Xiaoping.

Democracy’s ill health has also infected the United States and Europe. The president of Hungary, a formerly Communist state whose accession to the European Union in 2004 was a triumph for the West, has sought to “end liberal democracy” in his country by clamping down on press freedom and judicial independence. These trends are also evident in neighboring Poland. Far-right parties — like the United Kingdom Independence Party, the orchestrator of Brexit — have gained popularity across the continent.

During his successful campaign for president of the United States, Donald Trump expressed, at best, an indifference toward democratic norms and ideals. Trump called for his opponent, Hillary Clinton, to be imprisoned, raised false accusations of voter fraud, threatened legal action against the media, and refused to commit to honoring the results of the election. Trump has repeatedly professed his admiration for Putin, Russia’s dictatorial leader, for being “a strong leader”; as president-elect, he praised the Kazakh dictator Nursultan Nazarbayev for “achieving a miracle” in his country.

Where Did Democracy Go Wrong?

According to Brian Klaas, author of the new book The Despot’s Accomplice: How the West Is Aiding and Abetting the Decline of Democracy, there are three main reasons. One is American hypocrisy, or, as Klaas puts it, the “Saudi effect.” President George W. Bush made democracy promotion an explicit centerpiece of American foreign policy during his second inaugural speech in 2005, yet the following year when Hamas won democratic elections to govern the Gaza Strip, the U.S. refused to honor the results. And as Washington invested billions of dollars and thousands of American lives to impose democracy by force in Iraq and Afghanistan, the U.S. government forged a military deal with Uzbekistan’s tyrannical regime and maintained a close relationship with Saudi Arabia, one of the world’s most repressive countries.

A second reason for democracy’s decline is the resurgence of China and Russia. As China’s economic rise continued without interruption in the quarter-century after Tiananmen Square, observers began wondering whether the Chinese miracle was because of, rather than in spite of, its autocratic government. (The slower growth of India, a messy democracy, only seemed to strengthen this argument.) And while Russia’s economic fortunes in the Putin era have lived and died with the price of oil, there’s little question that the country is wealthier and more stable than it had been under Boris Yeltsin. The success of both countries, sustainable or not, seemed to indicate that democracy and growth were not necessarily co-dependent.

Klaas’ third reason is the weaknesses embedded in modern American democracy itself. Last year’s presidential election was a multi-billion dollar, 18-month saga that resulted in the election of a candidate who had never served in government or the military and one, incidentally, who earned three million fewer votes than his main opponent.

“Not many people looked at our election and thought that they were missing out,” Klaas told Asia Society. “I even heard a Thai general say that if ‘democracy means Donald Trump, we don’t want it.’”

What About China's System?

There’s no doubt that liberal democracy is in crisis. But the next question — whether plausible alternatives exist — is less certain. Consider China. The country’s ability to push through major infrastructure projects, such as a nationwide high-speed rail network, without political obstruction has dazzled Westerners frustrated at the gridlock endemic to American politics. In a 2010 episode of Meet the Press, the New York Times columnist Thomas Friedman famously admitted to fantasizing that the U.S. “could be China for a day” simply as a means to get things done.

Daniel Bell, a professor of political science at Shandong University in eastern China, has written extensively about the meritocratic advantages of China’s political system. Chinese leaders must pass a series of examinations and negotiate a complex bureaucracy before achieving national power. Xi Jinping may have benefited from nepotism: His father, Xi Zhongxun, was a key Mao-era official. But the Chinese president also accumulated experience as the governor of two major Chinese provinces and a stint as vice president. This, Bell argues, has given Xi legitimacy in spite of never having to face voters.

“I disagree with the view that there’s only one morally legitimate way of selecting leaders: one person, one vote,” Bell said in an appearance at Asia Society in 2015.

State-run media in China spun the chaotic outcome of the Arab Spring uprisings as an example of democracy’s inherent flaws. The election of Donald Trump only served to further reinforce this notion.

“I remember talking to the Chinese ambassador, and he made a crack about how in the U.S. you can be a nobody one day and the next day rise to power,” said Isaac Stone Fish, a senior fellow at Asia Society, “and you can’t do that in China because you have to go through all these different levels and rise through the system.”

Bell acknowledges that the Chinese system has serious drawbacks. The prohibition of free speech, ban on political opposition, and absence of an independent judiciary mean that there are no checks against official abuse of power, something that has emerged as a major crisis in the past decade in the country. The high-profile anti-corruption campaign launched by President Xi has reduced visible signs of excess, such as lavish banquets and fast cars. But critics believe that the campaign also serves as cover for Xi’s sidelining of rivals within the Communist Party.

Defenders of China’s Communist Party point to the country’s near-four-decade run of economic growth as proof that the system works. But in structural terms, the modern Party is little different from the one that, under Chairman Mao, presided over widespread political persecution, a deadly famine, and a disastrous period of social upheaval known as the Cultural Revolution. Even after Deng Xiaoping reversed Mao’s policies and adopted a pragmatic economic approach, the Party has still implemented policies whose consequences threaten stability and prosperity. The One Child Policy, adopted in 1980 without public debate, created a demographic imbalance that, three decades later, has prematurely reduced China’s working-age population. Even the much-vaunted record of economic growth is built on a shaky foundation of debt-fueled investment. "There have been 30 instances in the postwar period when a country's debt increased by 40 percent over a 5-year horizon," Ruchir Sharma, an economics expert at Morgan Stanley, said of China in an appearance at Asia Society in December. “And in 100 percent of these instances, the country got into a deep economic trouble within the next five years."

China has taken steps to systematize its government by introducing a mandatory retirement age for senior officials and establishing term limits for its leaders. The Communist Party’s Standing Committee of the Politburo, a seven-man body that stands atop China’s government pyramid, is designed to divide the responsibilities of government and ensure no one individual assumes too much power.

The behavior of Xi Jinping over the past three years, though, has raised questions whether these norms are durable. Xi has assumed positions within the Chinese government once shared by fellow leaders and has weakened Li Keqiang, his prime minister, by denying him the office’s traditional stewardship of economic policy. Xi has abetted and re-established a cult of personality, something explicitly discouraged in China after the Maoist era, by encouraging the singing of songs in his name. And, as the Wall Street Journal recently reported, there are questions that Xi may not name a successor at this fall’s 19th Party Congress in order to continue as president beyond the customary 10-year term.

The Consequences of Democracy's Decline

China, for what it’s worth, has never claimed that its system of government was universally applicable. In contrast to the United States or the Soviet Union, Beijing has never tried to install its system in a foreign country by force. Even still, democracy’s decline may prove advantageous to China in other ways. For one, it would weaken the democratic movement in Hong Kong, which has vied with pro-Beijing elements for political control of the Chinese territory, and deter would-be Chinese dissidents from challenging Communist Party rule on the mainland.

In addition, Klaas argues, the American absence of support for democracy leaves a vacuum in emerging states that Washington’s geopolitical rivals in Moscow and Beijing might fill.

“The ‘America First’ mentality, or the mentality that it’s not our business, makes the mistake that thinking that the withdrawal of Western influence means there’s self-determination,” says Klaas. “ [But what it means is] that China and Russia control things. It’s not something where if the West leaves, then, say, Malawi will be free to choose. It’s a global foreign policy battle, and the West’s losses are China's and Russia’s gains.”

Before the U.S. can promote democracy overseas, though the country may need to firm up support for it at home. A Harvard study conducted in November found that just 19 percent of American millennials believe that a military takeover is not legitimate in democracy compared to 45 percent of those older. 26 percent of millennials likewise feel that choosing leaders through free elections is “unimportant,” a sentiment shared by just 14 percent of Baby Boomers.

“A lot of people growing up now don’t understand what it’s like not to live in a free society in the West,” says Klaas. “That, combined with the "end of history," assumed that democracy is the natural way of things.

“In fact, democracy is the least organic and least natural way we’ve had."