Book Excerpt: 'The True American: Murder and Mercy in Texas' by Anand Giridharadas 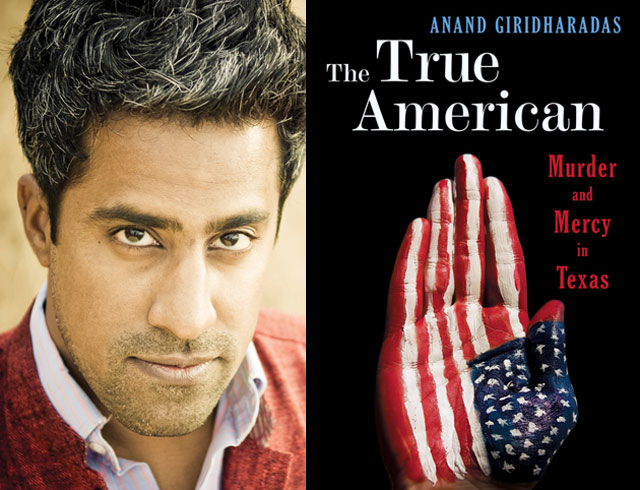 In The True American Giridharadas recounts the collision of Mark Stroman and Raisuddin Bhuiyan, men from very different places, geographically, culturally, and personally, but who are both searching to make their lives in the United States, a country which offers both great opportunity but also great adversity for native-born and immigrant alike.

Giridharadas appeared at Asia Society New York in January 2011 with his first book, India Calling, which drew on his experiences as an American-born Indian who returned to India as an adult to portray how Indian society at all levels is being remade in the digital world. The author then returned to the U.S., and brings to The True American the same journalistic eye as well as insight into the lives of his subjects.

On Monday, May 12, Giridharadas joins Jack Tchen, founding director of Asian/Pacific/American Studies Program and Institute at New York University, at Asia Society New York for a conversation which will range across the tough and ever-topical issues of American xenophobia, the nation's dependence on immigrants, and the encounter between Islam and the West.

Following is an excerpt from The True American which describes how, a decade after falling victim to a vicious anti-immigrant attack in the days after 9/11, Raisuddin Bhuiyan, inspired by his hajj (the pilgrimage to Mecca), decides to forgive, and in fact joins the campaign to commute the death sentence for his would-be murderer Mark Stroman.

After the hajj, Rais had dropped his mother back in Bangladesh and returned to Dallas. The new stirrings within him, to do something for others, grew stronger still, but he couldn't figure out what the something was: "My heart is telling me that, Rais, now you are in a better shape, because all this time you've been struggling to survive, to come to better shape. So now you're in a better shape — physically, mentally, financially. And now you came from Hajj, and you had a promise to God that you want to do something. So why I'm waiting more? Why don't I start right now? Who knows when I'm going to die? Because we don't know that when our time will be over."

He felt his vision growing wider than ever before. He was filling up with questions: How can I make the most difference? How can I use my talents? Whom will I need to know? Whom can I serve? Where do I begin? He considered himself "just a normal human being, a very, very poor and normal human being, a simple ordinary person." If he was going to achieve anything for others, he would have to do his homework and choose carefully.

Thus Rais spent a good part of his free time in 2010 online. Many ideas came to him. He thought about starting a charity focused on the developing world's poor. He thought about doing something to aid other victims of hate crimes, to speak and lobby on their behalf. He researched the case in which he had become entangled, studied victims-rights policies in Texas, examined case law, perused the sites of peace groups and other civic organizations doing all manner of social work around Dallas, poked around the pages of Muslim groups.

Rais worried that his knowledge of how to get things done in America was very limited. "It's not like I was born here, I know the culture, I know the people," he said. "So I had to go through a learning process to understand how things work here. Am I doing the right thing? Or am I going to make people pissed off or upset by doing this kind of thing? Because I had no idea."

He needed guidance and direction of a kind the Internet couldn't furnish. Rais needed, he realized, to network. So all that year he did. Community meetings. Peace conferences. Political fundraisers. Human-rights dos. If Dallas hosted it in a ballroom with stackable chairs, Rais attended it. Here, too, he sensed his skills lacking, but he tried to learn: going up to people he figured were important, telling them his story, asking advice if they seemed open to him. He carefully followed what he perceived to be the American rules — for example, giving people only a hint of what you do the first time you meet, then hopefully running into them again at another event and making a fuller-court press. "You don't really give them a lot of information the first time," Rais said. "You don't want to make them panic. It's also creepy — that, 'Why this guy is talking everything at the first point?' That was a learning curve for me. Because in this culture, this is how it is practiced. Even if you like someone, a girl, you don't just tell everything about you the first moment, right?"

Rais followed this precise approach when meeting Hadi Jawad. Jawad was a respected elder in the Dallas peace community, a seasoned activist quick to call a march or lead a delegation. Rais knew of Jawad from his research and ran into him one day at a fund-raiser for Farouk Shami, a Palestinian American personal-care tycoon who had parlayed his claim to have invented the world's first ammonia-free hair dye into a run for governor of Texas. When Rais first met Jawad, he told his story, to which Jawad intently listened. As it happened, the two met again on the Dallas circuit, a short time later, at a Muslim Legal Fund of America event. Rais now moved in. He told Jawad he'd been wanting to do something for others out of gratitude to his God, and he had an intuition that this something he was after should have to do with the man who attacked him. He wanted his service, whatever it was, to involve Mark Stroman.

It was, to say the least, an unlikely conclusion. Nevertheless, over these months Rais's exploration and reflection had con-verged in one particular theory: of all the things he could do, intervening in the cycle of mistrust and enmity between his religious community and his adopted country — between Islam and America — would be the most valuable. "Hate is going on in this country since 9/11," he said. "And where this hate is taking us? Nowhere. Our life is becoming more and more miserable every single day since 9/11. It has to end somewhere." After his long research, Rais had decided to devote himself to helping to bring about that end.

Rais continued, "I'm saying it not out of my anger, but I see the pattern. We have a long history of hate and violence. I think the time has come to stand up and say enough, because at the end of the day we're all Americans living in this country. Why can't we stop that cycle? That's why I think this message is very powerful, because we have to end this cycle. The cycle is going on starting from the day the country was built."

When Rais shared some of his thinking with Jawad at the fundraiser, the activist was taken by this young man and his strange idea. You have to meet Rick Halperin, Jawad said.

So now here Rais was. Since the encounter with Jawad, Rais's idea had developed further. He had started to focus on the possibility of forgiving Stroman as the centerpiece of his approach. Was this not what the Prophet had done when the citizens of Ta'if attacked Him? Was this not the logical implication of what Rais's mother had always taught him about mercy? Was this not what God had been trying to whisper in Mecca, by smashing Rais's nose, then healing it? Rais felt an urge, from the deepest place within, to forgive. He felt that it would cleanse him somehow, and of course multiply the God-given frequent-flyer miles of an imperfect man. He also had the feeling that forgiving Stroman, so close to the ten-year anniversary of 9/11, might nudge Americans to look anew at the notion of mercy — and reflect on their own thirst for vengeance.