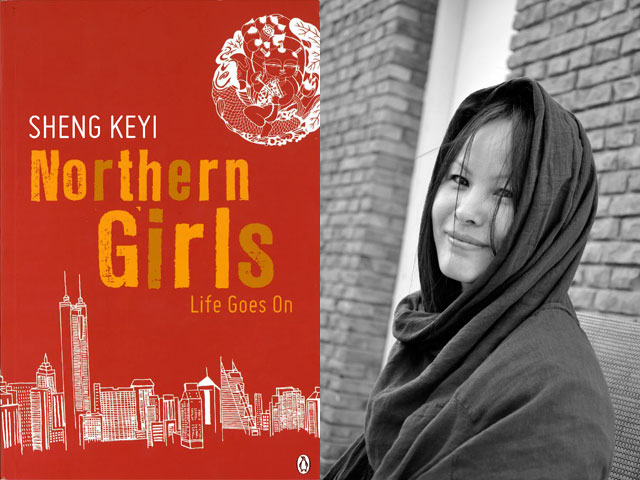 In her first novel, Northern Girls, author Sheng Keyi puts a face on the mass migrations which supplied the human energy for the Chinese economic miracle of the 1990s. Drawing on Sheng's own experiences as a girl from the rural north who is propelled south to the new booming manufacturing cities, Northern Girls is a gritty and at times harrowing story of the clash of dreams and realities of contemporary China.

Born in Yiyang, Hunan in the 1970s, Sheng is considered one of China's leading younger-generation authors. Northern Girls was published in China in 2004 and is now available in an English translation. Sheng began to write full time in 2001 and has since won several prestigious national awards, including the Most Promising New Talent Award, the Guangdong New Talent Award, the New Works Award, and the Lu Xun Literature Prize.

Sheng will read from and discuss her work at Asia Society New York on Tuesday, November 27. For those who can't attend the program in person, a live webcast will be available on AsiaSociety.org/Live at 6:30 pm ET.

Droves of young people are making the journey across the vast country to the nation's new cities.

Abandoning her Hunan village in the wake of a family scandal, sixteen-year-old Qian Xiaohong heads for the glitz and glamour of Shenzhen — a place she believes will be the perfect antidote for a young woman seeking to flee a stifling rural community. But Xiaohong swiftly discovers escape brings its own dangers, and the dual threat of vulnerability and violence, which hangs over the arrival of exuberant young migrants, is brought into stark focus.

Solace and salvation appear in the form of Xiaohong's fellow migrants — the "northern girls," also drawn by the neon skyline from China's hinterland. Without a safety net of education or state welfare, they must band together or face being sucked into the moral maelstrom that development has unleashed.

Xiaohong found that the beige jacket she'd hung up was missing. Ah Jun had reminded her not to leave it out. Still, it had to be washed and hung out to the dry. She was too lazy to make a complaint. She know how things worked here and knew that anything of even a little value could grow wings and fly off into someone else's embrace.

Her work became even more tedious, an unending line of monotony. She counted it off on her fingers. Twenty days she'd been at it, twenty days on end. Other than the half-day of sick leave, every day was the same and she went through it all in that robotic fashion. Clock in at eight a.m., clock out at eight p.m., without any margin of error. Back to the dorm, eight beds to a room. People were always coming and going, each individual's smell mixing with the rest. Only the odour coming from the shared toilet was stronger, becoming especially offensive when a queue of women waited to clear their systems. The tap water was always cold but they had so little time for washing their faces that it didn't matter much. When they did have time for a quick spit bath, they just had to grin and bear it. Factory regulations allowed a fan in the summer and a small space heater in the winter. It was lucky that winters this far south were mild, making it easy to bear. Frostbite and flu, at least, were not major problems. Each day when they came back, they'd dillydally through their cleaning up. At then-thirty, it was lights out, and they went to bed. They slept till morning, then got up and queued for the toilet. After washing, dressing and running a comb thought their hair, they were herded back into their cage on the factory floor where they repeated the previous day's routine.

There was about a fortnight left until the Spring Festival holiday. People began to stir, all decked out in festive colors.  Clothes and food were plentiful, ready for holiday-makers to purchase in preparation for their celebrations. She went shopping with Ah Jun, who bought a little of this and a little of that, getting ready to make a trip home for the holiday.

"Ah Jun, how long's it been since you went home?" she asked. Ah Jun seemed to want to buy the whole market and take everything back home. Xiaohong wondered where this strong desire to purchase so many things came from.

"Two years! My parents are looking forward to me being home. I want to get some more clothes for my brother and sister."

"Yeah. They're still at school."

"Ah Jun, you work so hard. Why don't you buy some clothes for yourself?"

"I'm in the factory all day every day. I only need my uniform."

"You're so generous. If my sister was like you, I'd be so happy I could die. But remember to get something for yourself."

When they went for fast food, Ah Jun always bought the cheapest meal, such as tofu or radish. She'd simply say, "That's what I like to eat." But Xiaohong didn't believe it for a minute. How could she like that bland stuff?

Looking at her friend's face, Xiaohong saw those eyes light up when they talked about her family and felt a twinge of sadness.

It was crowded. People were exchanging money everywhere, peeling notes off fat wads of cash, each stack as thick as a roll of toilet paper. They took in a note, handed out a note, everyone seemingly willing to spend every last penny. Workers happily parted with their money. Ah Jun joined the ranks, buying so much that the two of them could hardly carry it all home. Accompanying Ah Jun had its rewards. Halfway home, a small slip of red paper pasted on a wall caught Xiaohong's eye. She leaned in closer and saw a job advertisement:

The paste was still wet, so obviously it had not been there long.

Without a word, Xiaohong tore off the address.

"What are you tearing that off for?" Ah Jun asked in surprise.

"Do you know where the Qianshan Hotel is?"

"Hm. I suppose it must be in Qianshan Town. About three or four miles from here."

"I'm going to apply tomorrow you tell Runway that I'm sick to my stomach and went to the hospital. Remember to take leave for me so I don't lose my hard-earned money!" Xiaohong put it all so simply, it was as if she'd been planning it for days. Ah Jun was a little dumbfounded.

Excerpt from the book Northern Girls by Sheng Keyi. Translated from Chinese by Shelly Bryant. First published in English by Viking (Penguin Australia) in association with Penguin (China), 2012.