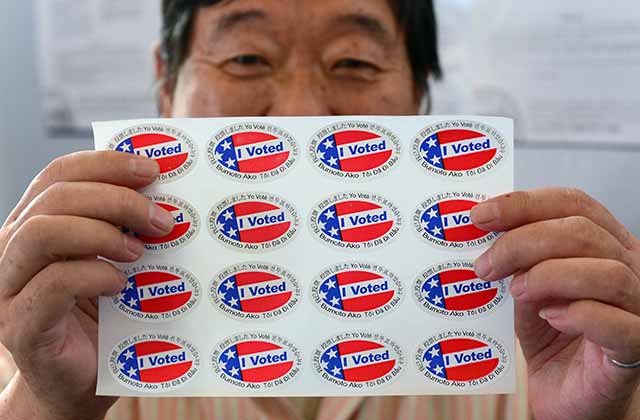 For more than two decades, Asian American voters have been on a steady march toward the Democratic Party when voting for president, and that trend appears to have held this year.

The Asian American Election Eve Poll found that Hillary Clinton beat Donald Trump 75 to 19 percent among Asian Americans in the 2016 U.S. presidential election. If accurate, that figure would represent the highest Democratic margin of victory among the demographic to date.

As recently as 1992, Asian Americans were firmly in the Republican camp, when then-President George H.W. Bush won 55 percent of their vote to Bill Clinton’s 31 percent. But this advantage rapidly shifted: A majority of Asian Americans voted Democrat for the first time in 2000 when 55 percent went for Al Gore to 41 percent for George W. Bush. The gap has continued to widen in Democrats’ favor since.

“Asian Americans have, overall, trended Democratic and independent, but what is even more interesting is that there is tremendous ethnic variation,” said Frank Wu, a professor at the University of California Hastings College of Law who frequently writes on Asian Americans and politics. “So while ‘Asian American’ is an important category for a social movement with voting, as with other phenomena, ‘Asian Americans’ exist only partially. It’s different Asian ethnicities that show much stronger leanings.”

See more of Asia Society's coverage of the 2016 U.S. election and its impact on Asia and Asian Americans.Learn more

According to a pre-election survey by NAAS in early October of this year, Hillary Clinton maintained that majority support across all groups, with Indian Americans once again showing the strongest backing. But this cycle, Cambodian-Americans displaced Vietnamese as the group with weakest support, favoring Clinton by a 53 to 18 percent margin over Trump, with 29 percent preferring a third party candidate (though these results were taken one month before the election, and therefore do not necessarily reflect how each group ultimately voted).

Because of the diversity within the “Asian American” umbrella, the reason for the rapid shift toward the Democratic Party defies simple explanation. Taeku Lee said that generally speaking, there have been several pull factors toward Democrats as well as push factors away from Republicans.

He pointed to incidents over the past few decades like those of Vincent Chin, a Chinese-American who was beaten to death by disgruntled autoworkers in 1982, and Wen Ho Lee, a Taiwanese-American scientist who was investigated and incarcerated on unproven allegations of giving American nuclear secrets to China. Incidents like these, Lee said, added to feelings of being treated as a “perpetual foreigner” that many Asian Americans have experienced at some point in their own lives.

“To the extent that Democrats are seen as the party that advocates for civil rights and the interests of communities of color, that is a pull to the Ds,” Lee said. “To the extent that Republicans associate with politicians who fan the flames of xenophobia or who advocate for policies that threaten the equal treatment of immigrants and minorities, that is a push away from the Rs.”

Lee said that a shift away from what’s been referred to as “homeland politics” — a concern with U.S. policy toward immigrants’ country of origin — has also contributed to the move toward Democrats. Cold War and post-Cold War politics of origin countries once led many Asian Americans — especially Vietnamese, Korean, and Filipino immigrants — “to favor the party with a more muscular, hawkish foreign policy profile,” Lee said. Subsequent generations further removed from the origin country, however, increasingly care about “more pan-ethnic political interests favoring a broad sweep of pretty liberal views on public policy.”

According to this year’s Asian American Election Eve Poll, the issues that Asian American voters reported caring most about in deciding who to vote for were the economy, health care, and education.

However, these growing populations are not guaranteed to move irreversibly toward the Democrats. Frank Wu pointed to “very vocal and very visible” Asian American supporters for Donald Trump, especially among newer Chinese immigrants. Many in this group professed support for Trump based on his stances against affirmative action (which can disadvantage Asian college applicants) and illegal immigrants (who are resented by many who immigrated legally), among other issues.

“So Asian Americans as an electorate continue to evolve,” Wu said. “They do not appear to be an overwhelming bloc vote, not to the extent that African Americans have been.”