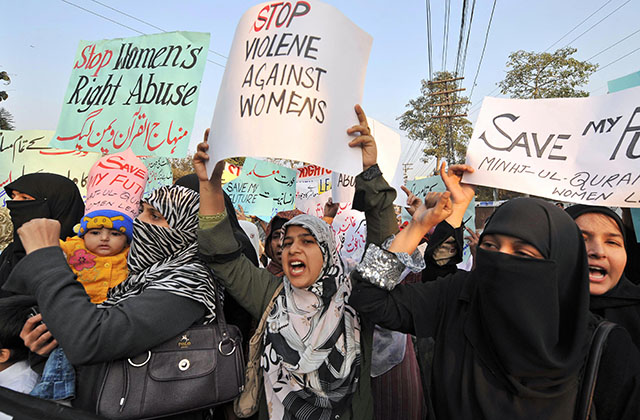 Protestors speak out against "honor killings" of women in Lahore, Pakistan on November 21, 2008. (Arif Ali/AFP/Getty Images)

Each year, throughout the world, thousands are murdered in so-called "honor killings" for bringing perceived shame onto their families for anything from infidelity to refusing an arranged marriage — or even being raped. The victims of these killings are predominately female, and because of legal loopholes and entrenched ideas about a woman’s role in the family, the practice is especially prevalent in Pakistan.

At this year's Academy Awards, Pakistani-born director Sharmeen Obaid-Chinoy won the Oscar for Best Documentary Short for her film A Girl in the River: The Price of Forgiveness, which looks into the practice of “honor killing” through the story of a young woman who survived one. In this episode of the Asia Society Podcast, we hear from Obaid-Chinoy about why the crime persists, and how things might be starting to change.