The 2016 Nuclear Security Summit: What to Look For | Asia Society Skip to main content

The 2016 Nuclear Security Summit: What to Look For 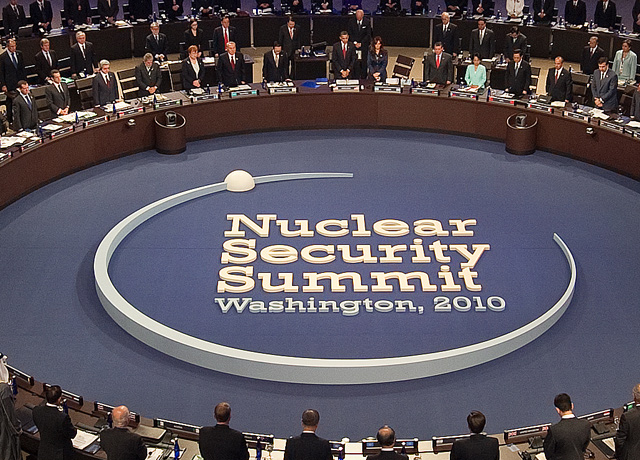 On March 31-April 1, President Obama will host the fourth and final Nuclear Security Summit in Washington, D.C. Although previous summits made notable progress on President Obama’s goal of securing vulnerable nuclear materials and minimizing the risk of nuclear terrorism, the 2016 meeting presents a key opportunity for the Obama administration to lock in important commitments that will strengthen the global nuclear security architecture for the future.

Dr. Gary Samore, Executive Director for Research at the Belfer Center for Science and International Affairs at Harvard University, formerly served for four years as President Obama’s White House Coordinator for Arms Control and Weapons of Mass Destruction, including as the U.S. Sherpa for the 2010 Nuclear Security Summit in Washington, D.C. and the 2012 Nuclear Security Summit in Seoul, South Korea. On March 25, he delivered a briefing to preview the 2016 Summit as part of the Asia Society Policy Institute's AsiaConnect series. Below are highlights from this conversation. A full recording of Dr. Samore’s remarks can be heard using the audio player below.

On the Formal Agenda for the 2016 Summit:

The Summit’s formal agenda will continue to be dominated by the goal of strengthening the global security of nuclear materials, associated technologies, and facilities. As has been the case in previous meetings, the primary aim of this discussion is to reduce the risk of nuclear terrorism or the potential for dangerous weapons of mass destruction to fall into the hands of non-state actors.

Asian nations will play an important part in achieving the Summit’s goals for three reasons. First, over the coming years Asia will see higher levels of growth in the development and use of civilian nuclear power than any other region of the world, making it a critical player in securing nuclear facilities worldwide. Asia will also likely experience the greatest expansion of nuclear weapons programs and technologies, making it a potential source of nuclear proliferation. And finally, certain parts of the Asian region — South Asia in particular — face the dangerous combination of a significant terrorist threat combined with vulnerable nuclear facilities, making them particularly vulnerable to would-be nuclear terrorists.

Overall, Asian states have made positive contributions to international efforts to improve nuclear security. Japan and South Korea, in particular, have been deeply engaged in supporting the work of previous summits, and China has shown a surprising degree of willingness to engage bilaterally with the United States on efforts to protect nuclear materials in the civil sector. However, the picture is not uniformly rosy across the Asian region. Russia has decided to boycott this year’s summit in protest over its differences with the United States and NATO in the Ukraine. Meanwhile, India and Pakistan have both been decidedly lukewarm on bilateral and multilateral cooperation in the nuclear security sphere, highlighting a degree of defensiveness about international concerns that their own facilities and safeguards are insufficient. There have been small signs of progress in bilateral U.S.-Pakistan cooperation, as Pakistan has more recently agreed to accept assistance in better securing its nuclear facilities. But both Indian and Pakistani leaders remain reluctant to significantly deepen their cooperation on this front.

The Informal Agenda — How to Handle North Korea:

While not a subject of discussion during the Summit’s formal meetings, the issue of how to manage ongoing nuclear threats and provocations from North Korea will most certainly be at the top of the agenda for President Obama’s side meeting with Chinese President Xi Jinping, as well as his trilateral meeting with President Park Geun-hye of South Korea and Prime Minister Shinzo Abe of Japan. Following North Korea’s most recent nuclear test in January, the United Nations rolled out the broadest and most far-reaching sanctions ever enacted against North Korea (UNSCR 2270), including prohibitions against key items such as the export of precious metals and the import of aviation fuel.

Though most policymakers agree these sanctions alone are unlikely to compel North Korea to come to the negotiating table, they reflect an important degree of unanimity within the international community regarding the country’s behavior, as well as growing Chinese frustration with [North Korean president] Kim Jong-Un’s actions. As President Obama sits down with Xi, Park, and Abe, they will most certainly address difficult questions regarding with way ahead with the DPRK, including: To what degree will China be willing to fully implement the UNSCR 2270 sanctions, and will the United States change its preconditions for negotiations in order to bring North Korea back to the table?

The Way Ahead for Civil Reprocessing in Asia:

Another important topic of conversation for the United States and its Asian partners will be the question of civil nuclear reprocessing, a process which involves separating plutonium from spent reactor fuel in order to generate usable plutonium for civil nuclear reactors. While China, Japan, and South Korea have all expressed a desire to pursue industrial-scale reprocessing capabilities, the issue remains one of deep concern for the United States, given the potential for reprocessing capabilities to spark a nuclear arms race should nations choose to divert plutonium stocks towards weapons programs rather than civilian facilities.

While the United States has greater leverage with both South Korea and Japan in preventing or discouraging them from these efforts, it has a limited ability to shape China’s plans. The best approach is likely to appeal to China’s bottom line, noting that the economics of this decision simply don’t make sense. Reprocessing is an incredibly expensive proposition that will require significant up-front investment for very little payoff, a point that some Chinese scientists and engineers have already begun to make as well. Ultimately, while this topic will be a point of discussion for this year’s meetings, it is unlikely to be resolved in the near future, leaving it to a new administration to chart a path through these difficult conversations.