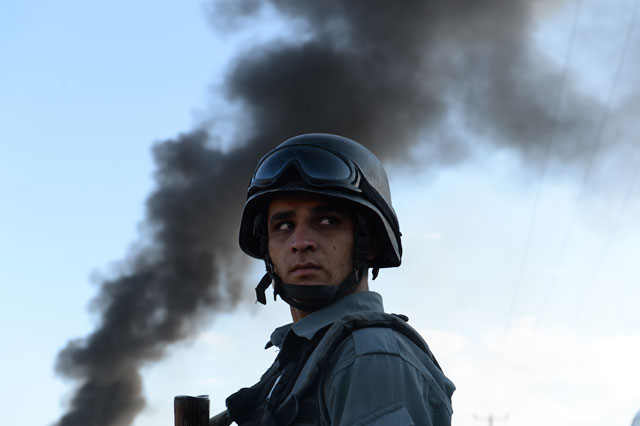 An Afghan policeman stands guard at the site of a suicide attack in Kabul on July 2, 2013. (Shah Marai/AFP/Getty Images)

2013 was a difficult year for South Asia. The year, which began portentously with the beheading of an Indian soldier, saw over 150 ceasefire violations between India and Pakistan. Violence along their border brought high-level diplomatic dialogue to a halt. There was trouble brewing inside Kashmir as well. The militancy, which had cooled considerably over the past decade, began to smolder once again. For the first time in ten years, terrorism-related deaths in the state were higher than the previous year. And Afghanistan continued to struggle with instability and weak governance, so much so that at the end of 2013 a U.S. intelligence assessment predicted an especially bleak future for the country.

This year could define the fate of the region for years to come. The leaders of India, Pakistan, Afghanistan, and the United States have an opportunity to secure a more stable future or risk the outbreak of greater conflict. As is often the case in South Asia, success is far from certain. Before the United States draws down its military presence in Afghanistan, it must redouble its diplomatic engagement with South Asia and pursue a regional strategy to enhance stability.

The Tough Road Ahead for India, Pakistan, and Afghanistan

With presidential elections and the end of NATO’s combat mission coming up, 2014 is perhaps most critical for Afghanistan. Unfortunately, there remains uncertainty on both fronts. After months of negotiating, the U.S. and Afghanistan finally brokered a bilateral security agreement in November, providing a legal framework for a small number of U.S. troops to remain in the country post-2014 to train, advise, and support Afghan forces as well as carry out some counterterrorism operations.

Shortly after the agreement was finalized, President Hamid Karzai stymied U.S. plans by deciding to delay signing the agreement until after the 2014 elections or until the U.S. agrees to certain preconditions it finds unacceptable. Though U.S. troops have largely handed off security responsibilities to the Afghan National Security Forces, there is a general consensus that a small contingent of U.S. troops is necessary to ensure stability. Military planning for the troop draw down and a limited presence post-2014 requires time. If this issue is not resolved soon, the U.S. could withdraw all troops in 2014, which could be calamitous for stability in the country.

There is also considerable uncertainty about whether the presidential elections will take place on time and whether they will be administered fairly. In addition to facing an armed insurgency that is trying to derail the elections, the Karzai government lacks internal legitimacy because of the controversial 2009 elections and rampant corruption. To ensure that the new Afghan government has legitimacy, President Karzai, who can no longer run because of term limits, must step down and the Afghan people must elect his successor democratically. Without free and fair elections, the Afghan state will not be able to maintain internal or international credibility.

Pakistan held successful elections of its own in 2013, marking the first legitimate democratic transition in its history. Prime Minister Nawaz Sharif came to office amid much optimism but has failed thus far to make any significant efforts to stabilize Afghanistan or to improve relations with India. Moreover, the new government has shown little interest in combatting the Pakistani Taliban, which threatens the Pakistani state, or combatting sectarian violence.

On the India-Pakistan front, things look grim despite the progress made in 2011 and 2012. The Pakistan parliament has tabled two groundbreaking agreements with India—to grant it Most Favored Nation trade status and to ease visa rules between the two countries. Both agreements were scheduled to be implemented by the start of 2013 but were delayed because of the Pakistani election. Instead of fast-tracking the reforms after the election, the two governments became embroiled in a diplomatic fight over border violence. Thus, the most promising developments in South Asia in recent years are back to square one.

India will be least affected if the regional situation continues to deteriorate, but it still has plenty to lose. A slackening economy is already tempering predictions of its rise; another wave of terrorist attacks or a renewed conflict with Pakistan could restrict economic growth further. India’s domestic politics present another reason for urgency. Narendra Modi, the Chief Minister of the Indian state of Gujarat and a Hindu nationalist from the Bharatiya Janata Party (BJP), could catapult to power in India’s general elections this year. Though Mr. Modi has not clearly defined what his foreign policy approach would be, he and his party have been more combative towards Pakistan than the current administration. Over the past decade, Prime Minister Manmohan Singh has exercised restraint with regards to Pakistan and Kashmir in the face of terrorist provocation. With the BJP at the helm, restraint may no longer be guaranteed.

A Regional Strategy is Needed

To fully grasp the importance of the next twelve months, one must understand the connections between India, Pakistan, and Afghanistan and consider how the 2001 U.S. invasion of Afghanistan transformed the region. The U.S. invasion and its dependence on Pakistan in the initial “War on Terrorism” led the U.S. to pressure Pakistan to ease tensions with India. The U.S.-Pakistan alliance also forced Pakistan into an awkward balancing act: it committed to fight terrorism, but some of its agents did so selectively, continuing to support militancy in Afghanistan and India. The invasion redirected significant militant and Pakistani military attention from India and Kashmir toward Afghanistan and northwest Pakistan. As the U.S. prepares to draw down its presence in Afghanistan in 2014, there will be far-reaching regional implications once again.

The U.S. withdrawal will leave a vacuum for international influence in Afghanistan and a more precarious security situation on the ground. India and Pakistan will move to fill the void, raising tensions between the rivals. India’s actions in Afghanistan could elevate Pakistani threat perceptions. And after the U.S. withdrawal, Pakistani proxies may make Indian assets in Afghanistan their primary target, further damaging an already tenuous relationship. The United States’ experience in Afghanistan has made clear that these four countries often have competing interests on individual issues. They would all benefit, however, from a broader, regional peace. Therefore, the U.S. must pursue a proactive regional strategy to stabilize Afghanistan and strengthen India-Pakistan relations in 2014.

U.S. strategy for regional security in South Asia should consist of the following five priorities:

1. Finalize the bilateral security agreement with Afghanistan as soon as possible. U.S. Defense Secretary Chuck Hagel has hinted that February 2014 could be a final deadline, because NATO defense ministers are meeting at the end of that month and will require clarity for military planning. The U.S. should also clarify the number of troops it will commit if the agreement is signed. Specifying the number of troops would signal U.S. commitment and place pressure on President Karzai.

2. Work to ensure that free and fair elections take place on schedule in Afghanistan, resulting in a government with both internal legitimacy as well as support from regional players.

3. Encourage India and Pakistan to end their diplomatic standoff over border skirmishes and push for a resumption of the composite dialogue. Prime Minister Sharif should lay the groundwork ahead of India’s parliamentary elections in spring 2014 with the intention of renewing talks as soon as a new government takes power in India. Implementing the stalled trade and visa agreements would be an obvious way to reinvigorate the composite dialogue by mid-2014.

4. Urge the Pakistani government to facilitate stability in Afghanistan. First, the U.S. should encourage new Army Chief Raheel Sharif to bolster efforts to undermine militant groups staging attacks in Afghanistan and Pakistan. Next, it should push Pakistan to facilitate the resumption of talks between the Afghan government and the Taliban. Releasing Taliban prisoners that are open to talks would be a welcome start.

5. Engage Pakistan and India (along with regional players like Iran) in a dialogue with the new Afghan government to promote cooperation towards stabilization and economic integration. The aim should be to enhance trust by establishing joint goals and clear, mutually understood areas of engagement for each country. A regional summit on Afghanistan could jumpstart such a process. This must get under way before the end of 2014 to minimize confrontation between regional players after the U.S. withdrawal.

Taken together, these tasks represent an ambitious undertaking. Even with persistent diplomatic effort, some of the items will be difficult to achieve, because the United States does not have control over many of the factors required for success. Still, a comprehensive approach offers the best path to stability in a region that could very well be hanging in the balance come 2015.