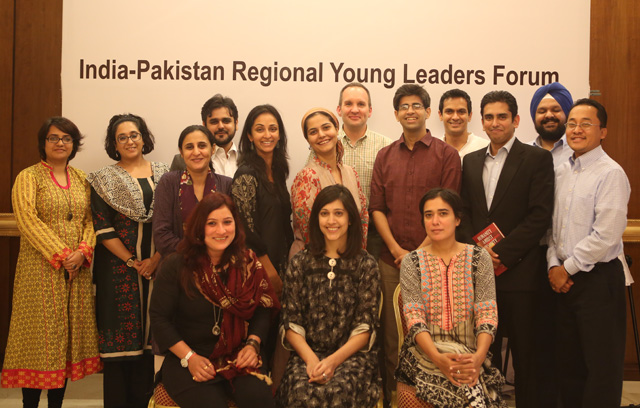 I recently returned from Islamabad, where Asia Society brought together a dynamic group of young leaders from Pakistan, India and the United States for our India-Pakistan Regional Young Leaders Initiative (IPRYLI), which is now in its second year. Political strife in the region meant this two-day conference almost didn't happen — it was delayed and had to be rescheduled, until finally everything fell into place.

And thankfully it did, because the 11 young people who sat around a table and engaged in a series of productive, and occasionally emotional, discussions around a wide range of topics could be the people who bring peace to the region once and for all. It didn't take long before these future Indian and Pakistani leaders were interacting as if they had known each other for years. They shared personal stories and their visions for Indo-Pakistan relations, and their recommendations to turn those common dreams into reality in the not too distant future. It should not come as a surprise that their dreams were quite similar.

I could go on, but I wanted to direct you to a great piece written by one of the participants that was published yesterday in The New York Times' India Ink blog. The author, Satchit Balsari, is an emergency physician in New York who was born and raised in Mumbai. In his story, Satchit explains how the difficulty of simply gathering a group of Indians and Pakistanis in Islamabad reveals the strains between the countries, but also showed the group how urgently change is needed. Here's an excerpt:

Our conference had been postponed several times over five weeks. High-level, off-the-record political intervention finally brought us our visas – the kind of intervention that not all would have access to. Tridivesh Singh Maini, an independent columnist who has written extensively on Indo-Pakistani relations through the Partition of 1947 and wars, reminded us that an Indian Sikh on holy pilgrimage to the Golden Temple in Amritsar in India cannot pay obeisance at Nankana Sahib, the birthplace of the founding guru of Sikhism, which lies beyond the border. And were he to apply months in advance and be granted a visa, he would have to report to the police station on arrival, as did I — first, to register entry, then to seek permission to exit.

We agreed that the restrictive visa regime begged for urgent change. Allowing the citizens of the two countries to meet, to mingle, to trade, to visit and to tour would go a long way in ameliorating the political and military posturing that has consumed Indo-Pakistani relations since Partition. Millions on both sides have families and friends on the other side whom they have not visited in decades. Millions on both sides would like the opportunity to visit historical and religious sites from their shared past – a past that stretches back thousands of years, sharing the birth of religions, cultures and languages.

I urge you to read Satchit's entire piece here.