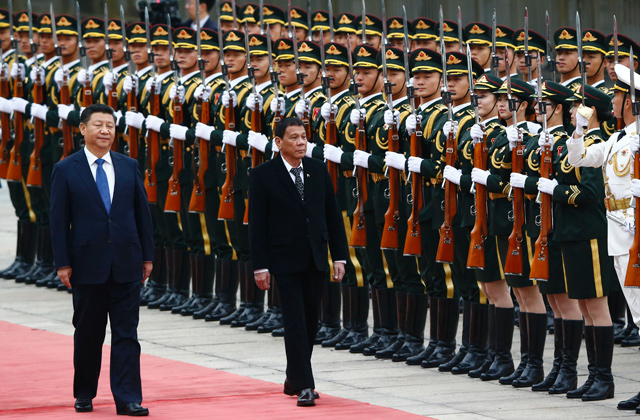 The relationship between Chinese President Xi Jinping and Philippines President Rodrigo Duterte will be one to watch in 2017. (Thomas Peter/AFP/Getty Images)

Before setting out our predictions for Asia in 2017, let's be clear about one thing: Among all the other shockwaves and consequences that the election of Donald Trump has brought — even before he takes office — it's pretty clear that a Trump Administration will make predictions and crystal ball-gazing even more of an exercise in futility than it already is. Throughout the long campaign, many of us at the Asia Society were peppered with questions by diplomats and Asian visitors about the possibility of a Trump victory. I for one answered with confidence, at every turn and right up until a set of interviews with Thai television on Election Day, that Trump would lose.

On Tuesday, December 13, Asia experts will discuss their predictions for the continent — and beyond — in the new year. Our free live webcast begins at 6:30 pm New York time.Learn more

Where Trump is concerned, forecasting isn't likely to get any easier. The president-elect has already shown a propensity to change his mind, or in some cases to deny previously-stated policy positions (see his denial of statements made, on tape, that Japan and South Korea should have nuclear weapons). And when it comes to Asia, home to so many current challenges and flash points, the Trump view is simply a blank slate.

Of course, looking at Asia in 2017 isn't all about Donald Trump. In terms of individual leaders, it will be about Xi Jinping and Shinzo Abe, about Rodrigo Duterte and Hassan Rouhani, about Narendra Modi and Aung San Suu Kyi, and about leaders of ISIS and other terrorist groups who may wreak havoc in places and ways we cannot guess. Vladimir Putin will have a hand in driving Asian events, though he lives in European Russia. And as ever, Kim Jong-un will likely provoke and rattle northeast Asia and beyond.

As for hot issues, some — like North Korea — will be familiar. So will tension in the South China Sea, the struggle against ISIS, the increasingly nasty air in India's cities, and the overall push to limit the impact of climate change. Other flashpoints worth watching in 2017: Hong Kong, which looks to have a turbulent road ahead; the Chinese economy, where a housing bubble and capital flight already cause anxiety; and South Korea, where a political crisis has left the nation in a potentially dangerous limbo.

Good news? Perhaps some will be found in Myanmar, with the Indian economy, and — while President Trump plans a retreat from the Paris climate deal — China will see continued growth in renewable energy investments.

The annual forecast may be a fool's errand, but it's also always an interesting exercise. We started doing this with 14 Predictions for 2014. Continuing the pattern, here then are "17 for 2017" followed by an honest assessment of how we fared in the 2016 forecast. (I say "we", but while my colleagues helped, I take full responsibility for what follows.)

Trump is talked out of his often-promised 45 percent tariff against China. Trade war averted.

That housing bubble doesn't burst, but the market falters — one factor that knocks growth under 6.5 percent for the first time in three decades.

In Hong Kong, the election of a new chief executive in March and the 20th anniversary of the handover from Britain to China in July bring the largest street unrest since the 2014 "umbrella" protests.

Despite the late-2016 drama following Trump's call with Taiwanese President Tsai Ing-wen, there is no flare-up — political or otherwise — over the island. The Taiwan Straits remain calm.

For the first time, the Chinese film industry beats Hollywood at the box office, clearing $10 billion in receipts.

Hope I am wrong, but it's hard to imagine that North Korean leader Kim Jong-un won't take advantage of a paralysis of governance in the South (see next item). So we predict another North Korean nuclear test in the first half of 2017 and missile tests as well.

With protesters refusing to relent, President Park Geun-hye steps down rather than wait for the post-impeachment verdict from South Korea's constitutional court.

He hasn't shown interest (would be impolitic to do so), and many South Koreans are looking for younger, fresher faces at the helm, but outgoing U.N. Secretary-General Ban Ki-moon is elected president of South Korea. Ultimately it's a vote for stability.

India enjoys another year of juggernaut economic growth — at 7.5 percent or higher, easily the best performance of any large nation.

Relative stability (see next item) and a continued influx of foreign investment make Myanmar one of the strongest GDP performers in Asia — with growth eclipsing 8 percent in 2017.

Probably out on a limb here, but it feels good to say it: Aung San Suu Kyi, with the help of U.N. mediator Kofi Annan, brokers at least a tentative agreement for better treatment of the Rohingya minority in her country.

President Rodrigo Duterte's rapprochement with China is trumped (couldn't resist) by his bromance with Donald Trump. U.S.-Philippine joint military exercises are held — a finger in the eye to Beijing.

Outside his country, Duterte is mocked and criticized for his vulgar statements and extrajudicial killings. But in the Philippines, most people like the results and reward their president with an approval rating that remains above 70 percent.

Another Trump campaign pledge goes unmet. The new president heeds the advice of Defense Secretary James Mattis and others and sticks to the Iran Nuclear Deal (which he called "a disaster … worst deal ever" as a candidate). Explaining his turnabout, Trump vows to be vigilant vis-à-vis Iran in other ways.

Having delivered on his pledge to lure foreign investment and boost Iran's economy, Hassan Rouhani wins a second term as president.

In its 50th anniversary year, the Southeast Asian alliance admits a new member: After a long push for an upgrade from "observer" status, Timor-Leste (East Timor) becomes the 11th nation in ASEAN.

Good news where you might not expect it. Afghanistan sees a drop in Taliban violence and civilian deaths.

AND AS FOR LAST YEAR'S PREDICTIONS ...

NO. Growth may have been propped up by government spending, but it lands north of 6 percent.

3. Japan’s rate hits 1.5 percent (which would actually be a stellar number — at this moment — for that economy).

NO. Then again, who foresaw Rodrigo Duterte?

5. In Australia, there is no early vote — and in late 2016 Malcolm Turnbull keeps the prime-ministership.

SORT OF. Turnbull is still the PM. We'll give ourselves 3/4 of a point.

6. And in Myanmar, more of an “after-the-ballot-box” issue: 2016 proves a good year for stability and democratic transition, as Aung San Suu Kyi and her victorious NLD party select a new president and mend fences with the former military rulers.

MOSTLY. But this doesn't account for fresh ethnic tensions. 3/4 of a point.

7. North Korea conducts a nuclear test (I know, we said this would happen last year). The test comes in 2016, China’s upset is great, and that in turn actually serves as welcome news for U.S.-China relations.

8. Iran (1): In terms of implementation of the nuclear deal, Iran does as it promised and receives the sanctions relief outlined in the deal.

9. Iran (2): Despite the above, rather than a warming between the U.S. and Iran, the post-deal period sees fresh tensions (vitriol from Tehran, measures in Washington to punish Iran on other fronts).

10. Afghanistan: President Obama, mindful of the troubles that followed the 2010 troop withdrawal from Iraq, delays the U.S. pullout from Afghanistan again. The calculus: better to renege on a pledge that risks the erosion of security gains.

11. Fury over air pollution — and a drop in economic growth — brings some global good news from China: CO2 emissions fall, and the air quality in Beijing improves.

MOSTLY. We can't really tie the result to "fury", and as the year ends Beijing is having some old-style nasty air days. We'll take half a point.

12. Hillary Clinton is the Democratic Party nominee for president (I know, going out on a big limb there), and, taking advantage of an early-primary standoff between Ted Cruz and Donald Trump, Marco Rubio snags the GOP nomination.

13. Asian leaders — keen to embrace the “known commodity” — breathe a collective sigh of relief as Hillary Clinton is elected the 45th President of the United States.

14. New Zealand votes to change its flag, dumping the upper-left-corner Union Jack (which smacked of colonialism) for the leaf.

15. New Zealand (more): Thanks in part to the addition of Rugby Sevens to the XXXI Olympiad, New Zealand improbably cracks the top 20 on the Medal Board. (Thanks to The Economist for this one — I just felt good about it for some reason).

16. The Great Wall ­— an epic China-U.S. co-production starring Matt Damon and Andy Lau and directed by Zhang Yimou, has a better-than-expected release in the U.S. and breaks box office records in China.

NO. The release was delayed.