Asia Pushes Ahead on Trade One Year After U.S. Withdrawal from Pacific Deal | Asia Society Skip to main content

Asia Pushes Ahead on Trade One Year After U.S. Withdrawal from Pacific Deal

WASHINGTON, D.C., January 18, 2018 — One year after the U.S. pulled out of the Trans-Pacific Partnership (TPP), governments across the Asia-Pacific are reassessing their reliance on American economic leadership and the U.S. market and pressing ahead with their own trade and investment agreements, according to a group of senior trade experts from the region convened by Asia Society Policy Institute (ASPI) Vice President Wendy Cutler.

“The announcement of an agreement on the core elements of CPTPP last November highlighted a major shift in the trade world,” said Cutler, who served as Acting Deputy U.S. Trade Representative until 2015. “With the U.S. adopting a more inward-looking trade policy, countries in the Asia-Pacific region have picked up the pieces and taken the lead in advancing regional integration and trade liberalization.” 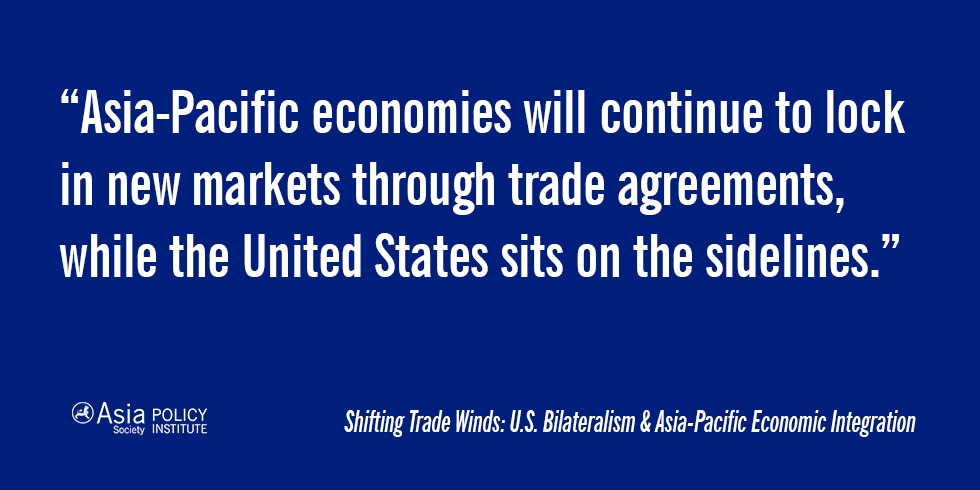 The issue paper makes four key recommendations to policymakers in the region on how to navigate “an increasingly complex Asia-Pacific trade landscape” after “an unusually eventful year for trade.”

The paper updates the findings and recommendations made in March 2017 by another Asia Society Policy Institute publication, Charting a Course for Trade and Economic Integration in the Asia-Pacific.

The issue paper co-authors are:

Charles Finny, Partner at Saunders Unsworth Ltd. He was CEO of the Wellington Regional Chamber of Commerce from 2005 to 2010, and prior to that he worked as a diplomat and trade official, including postings in China, Taiwan, and Singapore.

Peter Grey, Chair and Non-Executive Director of MLC Limited and Co-Chair of the Japan Business Group at Corrs Chambers Westgarth. He has served as Ambassador of Australia to Japan, the European Union, and the WTO.

Kim Jong-Hoon, South Korea’s former Minister for Trade and the Chief Negotiator of the Korea-U.S. FTA. A career diplomat, Kim has over 38 years of experience in foreign service and trade issues.

Shotaro Oshima, Chair of the Institute for International Economic Studies in Tokyo. He was Japan’s Deputy Foreign Minister for Economic Affairs and Ambassador to Saudi Arabia, the WTO, and South Korea.

With a problem-solving mandate, the Asia Society Policy Institute tackles major policy challenges confronting the Asia-Pacific in security, prosperity, sustainability, and the development of common norms and values for the region. The Institute builds on the mission of the Asia Society, which has sought for 60 years to explain the diversity of Asia to the United States and the complexity of the United States to Asia, and to be a bridge in problem-solving within the region and between Asia and the wider world.