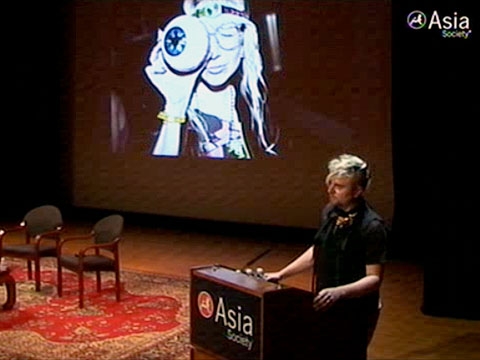 "I am fascinated by Japanese subcultures," Kawamura confessed while introducing her upcoming book Fashioning Japanese Subcultures. She also spoke briefly about the recent history of interest from the West towards Japanese fashion: "When Japanese designers in Paris began to emerge, the entire world began to be interested in Tokyo fashion."

In Kawamura's telling, the fast-paced fashion scene in Tokyo has made the last two decades particularly interesting, creating multiple divisions in youth culture and in the products they consume and create. "The easiest way to understand Japanese subcultures is to divide [it] into different districts, and in each district you find very interesting youth subcultures coming out of it." Kawamura went on to describe some of these urban tribes, and their very specific characteristics in dress and location, including Lolita and Wamono in Harajuku, Ganguro and Mamba in Shibuya, and the Maid Girls in Akihabara. Despite divisions and striking differences between groups, "the boundaries are all beginning to blur," she said, making these subcultures and the youth fashion scene increasingly complex.

Graphic designer Nicole Michalek spoke about her experience in Tokyo and her attempt to document what is going on in Nylon magazine, stating flat out, "It's difficult to fully comprehend such a vibrant and multi-faceted city."

Speaking in front of his photographs, Dan Bailey described his own experiences in the world he inhabits and documents, claiming "what is important right now is the link between street fashion and high fashion, and the place where these come together is in the nightclub." Bailey's account of the Tokyo scene ("Neo Tokyo" as he calls it) had a very personal ring to it, not only because so many of his friends belong to this subculture but also because it is an underground that is now starting to permeate the media. He pointed out that a difference between Western fashion and Tokyo fashion is the commercial treatment of personal style and individuality. In Tokyo, in some extreme cases of marketing, a "person's whole identity, the person's face, is owned by an agency."

One conclusion the panel drew about Tokyo fashion is that it constantly renovates itself and moves forward, thanks to a perpetual cycle in which young people make clothes and impose trends before eventually getting jobs, dyeing back their hair, and conforming to the corporate life—leaving behind them a new generation to start where their predecessors left off.