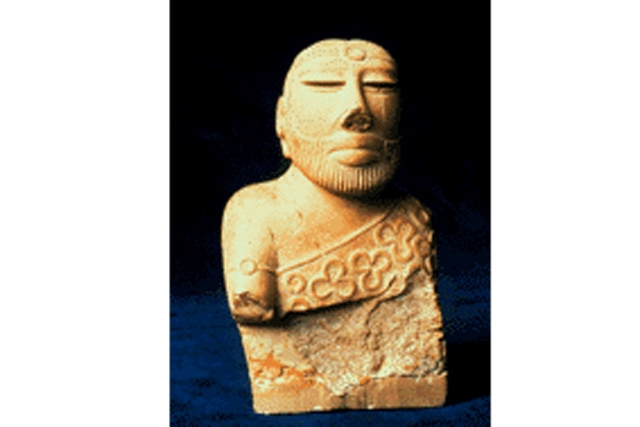 One of the great civilizations of the ancient world, the Indus valley civilization flourished 5,000 years ago in the valley of the river Indus. Twice as extensive as its contemporary civilizations--the Old Kingdom of Egypt and the Sumerian city-states of Ur and Lagash--it was a culture of great sophistication and power. Its people built hundreds of planned cities, the first in the world, and had trade links with Mesopotamia and Oman. For seven hundred years the civilization flourished; then for unknown reasons it disintegrated and was forgotten. Rediscovered in the 19th century by archaeologists, this great civilization has remained virtually unknown to American audiences.

In spring 1999, the Asia Society brought together more than a hundred ancient artifacts from Pakistan in Great Cities, Small Treasures: The Ancient World of the Indus Valley. The exhibition was the first opportunity for U.S. audiences to see works in terra cotta, bronze, gold, semi-precious stone, and shell produced in the Indus region in the 3rd and 2nd millennium BCE. The exhibition was part of Pakistan 1997-98, events celebrating the 50th anniversary of Pakistan's founding. Related events at the Asia Society included performances, lectures, readings, film screenings, and a symposium.