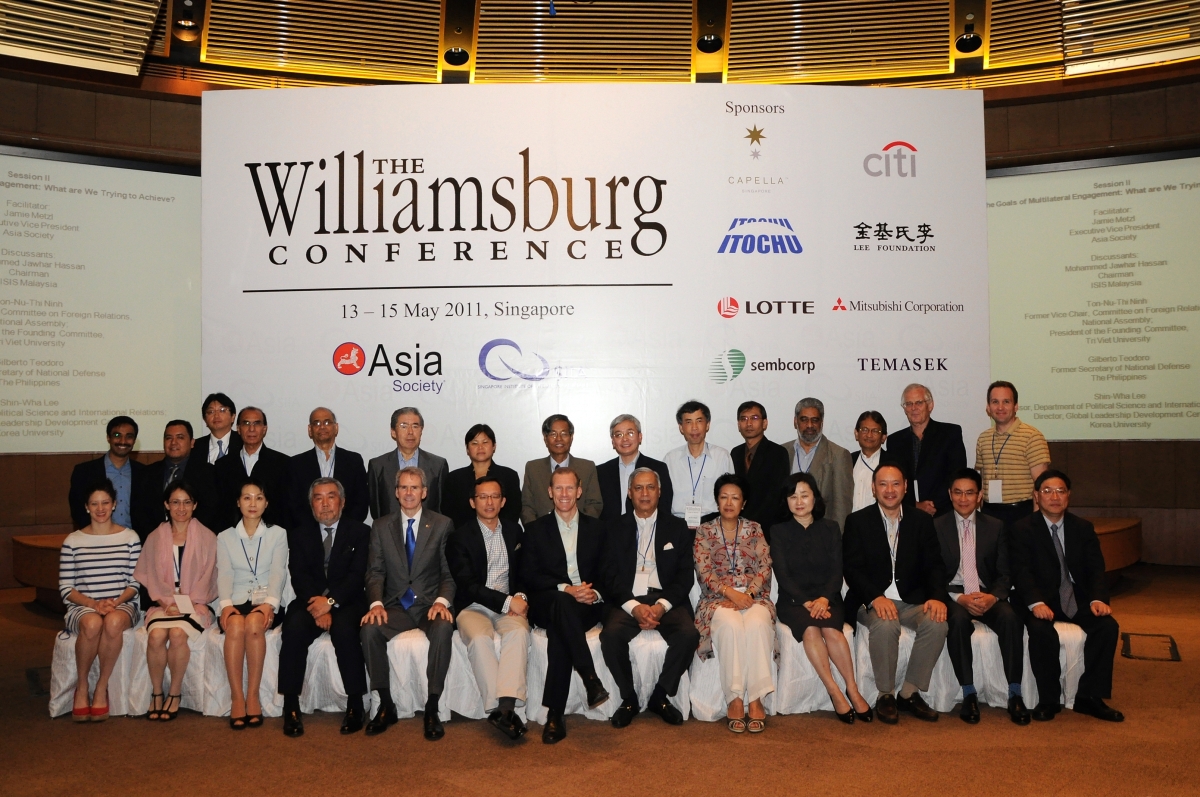 American and Asian Regionalism: A New Strategy for Multilateral Engagement

From May 13-15, 2011, the Williamsburg Conference returned to Singapore for the second time in its 39-year-history.  Asia Society, in partnership with the Singapore Institute of International Affairs (SIIA), brought together 32 distinguished Asian and American leaders from 15 countries and economies to Singapore. Situated in the major sea lanes in Southeast Asia and a major regional economic hub, Singapore was the ideal setting in which to talk about Asia-Pacific partnership in the areas of security, trade and economic integration. The conference drew on the work being carried out by the Asia Society Task Force on US-Asia Relations: A Strategy for Multilateral Engagement.

The relationship between the United States and Asia is changing. The Barack Obama administration has recognized the need for a more multilateral approach to foreign policy decision making and, as a result, is focusing greater time and resources on Asia. For instance, the appointment of a U.S. ambassador to the Association of Southeast Asian Nations (ASEAN) finally took place in 2009, although this first was proposed in 2006. Additionally, U.S. Secretary of State Hillary Clinton made Asia her first overseas destination following her appointment. Despite some fears, the 2008 financial crisis did not lead to a split between the United States and Asia but rather caused a reshaping of the relationships and an emergence of new forums for regional and international discussion. The United States remains an indispensible power in Asia, but China’s rise is being felt across the region, forcing ASEAN member states to reconsider some decades-old security concepts.

Until now, ASEAN played a central role in the growth of Asia’s regional processes. It brought together historical rivals by providing a venue in which to discuss a host of controversial issues. Still, whether ASEAN will remain central to East Asian regionalism in the future is unknown. Unless there is greater trust and stability among the East Asian nations, no single body will be successful in coordinating a cohesive governing structure in Southeast Asia.

That said, Asia looks much different today than it did ten years ago. A new type of multilateralism is taking shape across the region, with an increased emphasis on regionalism and a recognition of interdependence. Indeed, as we move toward a multipolar world, it is no longer prudent to cast aside smaller players in the system. Despite a general desire to strengthen the ASEAN framework, substantial challenges to further Southeast Asian integration remain. Contentious issues such as border disputes and territorial conflicts in the South China Sea will test the strength of the ASEAN framework as a mechanism for conflict resolution. The goal of establishing an ASEAN Community with a unified currency by 2015 poses a daunting challenge. There is a consensus that economic integration in Asia can add significant value if executed properly, but there is still a long way to go before economic regionalization can become a reality.

As Asian nations continue their economic growth and rise to prominence in the international arena, new challenges will arise. A strong ASEAN, while beneficial to regional stability, will be difficult to achieve, and member states must continue to work toward attaining mutual agreement in order to strengthen collaboration. Facilitated by the United States and China, but led from within, ASEAN can become a strong regional solution-generating body that will endure and prosper well into the future.