Events in early 2011 show the timelessness of a children's classic 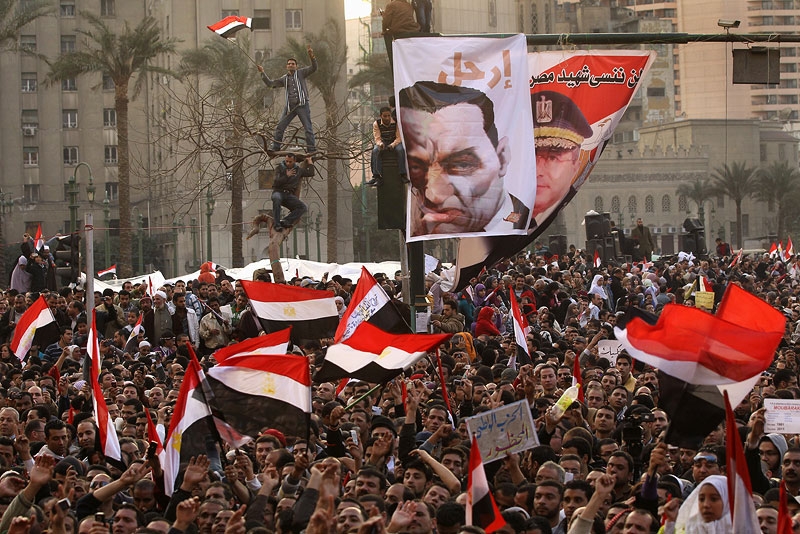 In the crazy days of January when Arabs surprised the world, and probably themselves, by rebelling against their aging dictators, my two-year-old son and I read a Russian children's classic called The Giant Cockroach.

In the poem, a happy, pastry-munching life of the animal kingdom is broken by the appearance of "a terrible giant: the red-haired, big-whiskered cockroach." The roach proceeds to bully and harass far bigger animals, demanding they surrender their cubs so that he can eat them for dinner. The dictatorship of the cockroach reduces the animals to a sobbing, quivering, pathetic bunch. Wolves devour each other out of fear. An elephant shivers so much she stumbles and sits on a hedgehog. A hippo calls on the bulls and the rhinos to spear the enemy with their horns, and offers two frogs and a pinecone as a reward. The bulls and the rhinos say they’d be happy to oblige but the horns are not cheap these days.

And so the cockroach rules unchallenged. Until a laughing kangaroo points out that the cockroach is no giant, but merely a cockroach. The hippos tell the insolent marsupial to shut up—"you'll make things worse for us"—but then a sparrow comes along and swallows the bug, whiskers and all. The animals rejoice.

It is hard not to read the poem as an allegory for a rise and fall of a dictatorship. Despots tend to appear invincible while they rule, and then laughably weak when they teeter and fall. Once their subjects refuse to obey them and call them out on their farce, dictators look ridiculous. Often, they react by killing and jailing people, which buys them more time in power (Iran, Belarus, and Uzbekistan come to mind). But just as often, when faced with a truly popular challenge, dictators shrink to the size of their inner cockroach as erstwhile layers of support, like the police, the military, and the civil service, begin to peel away. Tunisia is merely the latest example. The so-called color revolutions in the former Soviet Union fall into this category too. As of this writing, Egypt's seemingly perpetual ruler faced mass protests demanding his resignation.

The Giant Cockroach was written in the early 1920s by a wonderful children’s poet named Kornei Chukovsky, author of such other mirthful classics as Doctor Ouch, The Crocodile, and Wash'em Clean, which features a walking and talking washstand with no discernible political ambitions. Ever since its publication in 1923, The Giant Cockroach has supplied not only entertainment to generations of Russian toddlers but also food for thought for adults. Did Chukovsky really have Stalin in mind when he wrote it? It is tempting to think that he did. For some readers, the roach's whiskers evoke Stalin’s signature mustache with painful clarity. The simile may have been picked up and developed by Osip Mandelshtam, the Russian poet imprisoned and hounded to death in Stalin's purges. "The cockroach’s mustache is laughing, and his jackboots are shining," Mandelshtam wrote in 1934, leaving little doubt as to whom he meant.

Next: "When you read it to your own kids, you hear something else."

Evgenia Ginzburg, another writer ensnared in Stalin's repressions and jailed in Siberia for 18 years, recalls in her memoir the shock of discovering a possible second meaning of The Giant Cockroach. "I don’t know if Chukovsky intended it or not. Probably not. But objectively, it's the only way to read it!" It's a feeling familiar to most readers of the poem. You hear it one way as a kid, transfixed by all the cool illustrations of animals in panic. And then, when you read it to your own kids, you hear something else.

But was there really a second meaning? In 1921, when Chukovsky set out to write The Cockroach, Stalin was still a relatively obscure thug from Georgia about to start elbowing his way to the top of the Communist Party. He was years away from attaining the bloody renown that would merit a satire. Chukovsky himself denied it, even after it would have been safe to admit it. Then there's the very good question of how in the world the Cockroach could have crawled through the Soviet censorship that found fault with far tamer works? One theory is that the satire—if it indeed existed—was so brazen and vicious that even to acknowledge it would have meant to be guilty of slander by association. And so The Cockroach survived.

Another incredible thing about The Giant Cockroach is that Stalin himself appears to have co-opted the critter for his own political ends. That trick recast the poem as a propaganda tool for the regime, and may have given Chukovsky the biggest political cover imaginable. Stalin was oddly attuned to the power of literature, and kept an eye on several influential writers in the Soviet Union, much to their anguish.

At a Communist Party congress in the summer of 1930, Stalin defended a few of his policies including "emergency measures" (read: "death") against wealthy peasants, and railed against dissenting voices within the party. "A cockroach rustles somewhere, and even before he crawls out of his hiding place, they jump backwards, become terrified and start yelling about a catastrophe, about the death of the Soviet power," Stalin told the assembled delegates. They dutifully laughed. "We calm them down, try to convince them that there's nothing dangerous here, that this is just a cockroach that you shouldn’t be scared of." Many years later, Chukovsky grumbled in his diary about getting "plagiarized" by Stalin. "He retold my entire fairy tale and didn't cite the author."

The Giant Cockroach wasn’t the first children's tale to lampoon, even if unwittingly, the farce of arrogant, absolute power. Danish raconteur Hans Christian Andersen did something similar in "The Emperor’s New Clothes." A couple of years ago, I spoke to a Zimbabwean political activist named Magodonga Mahlangu, and she recounted to me another fable that mocks the inherent weaknesses of a dictator. In that tale, an old man enslaves a bunch of monkeys and orders them to bring him fruit from the mountains, flogging those who disobey. The monkeys do as they are told for a while, until one day a little monkey wonders why. The old man didn't plant the fruit, so what are we doing taking orders from him? The monkeys walk away, and the old man starves to death. Mahlangu was using this fable to mobilize opposition to Zimbabwe's own bad old man. I later learned that the tale is called "Monkey Master," and it was written in the 14th century by a Chinese scholar named Liu Ji.

In the 1990s, as Russia began to excavate the relics of Stalinism, The Giant Cockroach drew so much re-interpretation that the author's granddaughter felt compelled to respond. In a newspaper column, she cited Chukovsky’s own lament about people "seeking out a secret political meaning" in his tales, and once again reminded readers that The Cockroach came along too early to be Stalin. But then Elena Chukovskaya continued, rather cryptically: "The future casts its shadow on the present. And art can discern that shadow before the appearance of the one who casts it."

So was it Stalin or not? "The Cockroach is as much Stalin as any other dictator in the world," she wrote.

A shorter version of this piece was originally published on Newsweek.com on February 6, 2011.

Philip Shishkin is a Bernard Schwartz Fellow at the Asia Society. Philip spent 10 years as a staff reporter of the Wall Street Journal, most of it as a foreign correspondent, running their Baghdad bureau through the height of Iraq's sectarian war in 2006 and 2007. He has written extensively about Central Asia, chronicling the turbulent nation-building process in post-Soviet Kyrgyzstan and Uzbekistan.