Walking With a Giant: The Yao Ming I Know | Asia Society Skip to main content

Walking With a Giant: The Yao Ming I Know 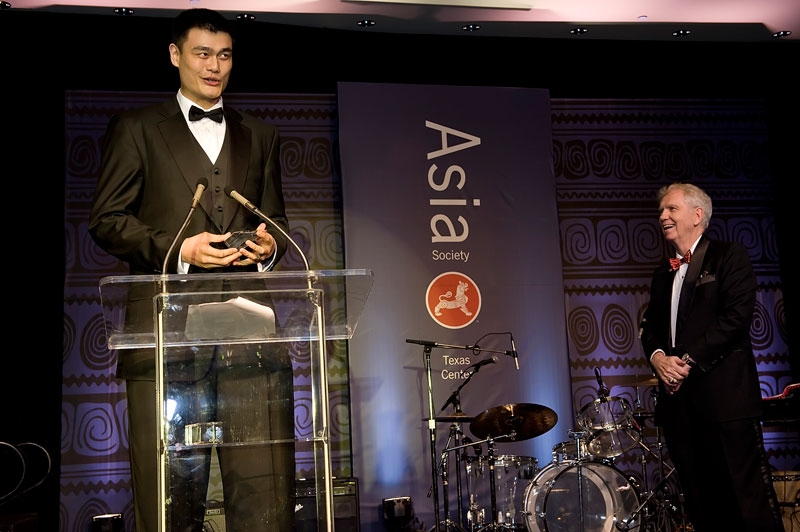 On learning that Yao Ming was finally making public his decision to retire from professional basketball, I had mixed feelings. As a Houston Rockets fan, I had big time regret that our home team had lost such a force of nature and leader on the basketball court. As a friend, I was only happy for Yao, knowing with certainty that such a decision was best for his long term health, and that it was not just the end of Yao’s professional basketball playing days, but also the beginning of an equally exciting chapter in his life’s journey.

After all, it was not a question of whether, but when he was going to retire from professional basketball. Yao had spent two seasons going through intensive therapy and training to be able to return and play at the highest levels — figuratively and literally — in professional basketball, only to suffer new season ending injuries. To make an effort to come back a third time would have required an extreme amount of willpower with the knowledge that in spite of all the pain and suffering it would take to prepare for the next season, Yao would be just one step away from suffering further injury. All of this was made even more difficult by the uncertainty of the NBA season, given the ongoing lockout.

Yao has left a lasting impact on Houston. He put Houston on the map in China — the world’s biggest, fastest developing country, which will have the world’s largest economy in the near future. Because of the huge audience Yao attracted for the Houston Rockets in China, more people in the world regularly watched the Houston Rockets than virtually any professional team on the planet. Ironically, while Houstonians often feel that the rest of America does not necessarily have any particular image of the city, in China through Yao Ming, Houston is one of the best-known foreign cities.

Yao had the same impact on the NBA. Simply put, the NBA discovered an audience in China even larger than the U.S. An illustration of this could be seen at every Houston Rockets home game, where Houston fans became accustomed to seeing the ever-present and oft-changing advertising in Chinese characters surrounding the court. There was a large Chinese audience watching these games on television, and Chinese brands jumped on the unique advertising opportunity. Without a doubt, basketball is now a major sport in China because of Yao. If anything, his acquisition of his former team, the Shanghai Sharks, and his continued association with both the Sharks and the NBA in China will encourage more talented young Chinese athletes to play basketball with the dream of an ultimate career in the NBA.

My family and I were fortunate to meet Yao at the very beginning of his Houston journey. I had the privilege of representing Yao and his family in matters dealing with U.S. immigration law, one of the first issues that must be dealt with for anyone seeking employment in the U.S. It was not surprising that Yao’s mother and father quickly joined him in Houston, given how important family is in China. And not long thereafter he was also joined by long-time sweetheart, and future wife, Ye Li. Both of Yao’s parents were leading basketball players on the China National Team, winning their own share of honors playing center just like their son. It was no surprise that their only son would be born with innate basketball talent, enhanced by his incredible height and hard work ethic.

Spending time with Yao in any public setting was always an experience. There was no moment or place where Yao was free of intense scrutiny — literally by every individual within eye sight, at all times. One would be hard pressed to think of any figure on our planet who is as instantaneously recognizable — not only because of Yao’s 7-foot-6 height, but because he has become a one-man advertising conglomerate. He's the public face of many name brand products in the U.S., and even more so in China. When planning to meet Yao, we always needed to work out strategies by which he could enter a restaurant or building through a back entrance, and then there was always the question of the stability of the chair. Yao not only has the height, but he weighs more than 300 pounds, thus requiring, whenever possible, a larger more sturdy chair than one would normally find.

When we have been with Yao in public it always continues to amaze me how much patience he has. There is a familiar pattern. First people gather around and gawk in a combination of surprise, amazement and joy, and then one bold individual dashes out of the surrounding group to Yao’s side and yells out, “Honey, take my picture!” Before long there is an onslaught of photo seekers, new and longtime fans alike. I have never once seen Yao say no, but knowing him well, you could see in his face varying degrees of annoyance, particularly with individuals who simply assume that all they had to do was run up and stand beside him to get their photo, as if they were standing next to a public monument.

In 2002, the Asia Society Texas Center had the privilege of hosting Chinese President Jiang Zemin. I worked very closely with the Chief of Protocol for China and the then Chinese Ambassador to the United States, Yang Jiechi (or, as his friends know him, Tiger Yang). There were many issues and details to arrange for the president's visit to Houston. During the course of negotiations, we discussed the possibility of a meeting between Yao and President Jiang. Yao, after all, was only an NBA basketball player, but the discussions took on a life of their own.

It was like negotiating protocol issues for the prospective meeting of two heads of state. The Chinese were eager for President Jiang to meet Yao, and the leadership of the Houston Rockets were eager to make Yao available for the meeting. But along the way we had a crisis — and that was over whether or not photographs could be taken. When this issue was raised by the Chief of Protocol, I was taken aback based upon my experience that everyone in the world, no matter how high and privileged they were, wanted a photo with Yao. However, I received an embarrassed response from the China Chief of Protocol. He said that he was concerned that if a photo was taken of Yao with President Jiang, Yao would make the President of the People’s Republic of China look too small.

I responded in amusement, “Of course, Yao Ming makes everyone physically look small, but the President of China is even bigger since he is the head of government of one of the biggest, most important countries in the world.” In the end, this issue was resolved, the meeting was held and the photos were made, although I understood that their distribution in China was restricted.

Yao has been supportive of the Asia Society in a variety of ways. He was the honoree at our 2010 gala and graciously accepted our award at the black-tie Tiger Ball. As he always does, he surprised the audience by his charm, wit, confidence, command of English and innate sense of humor. Through the Yao Ming Foundation, Yao made a significant contribution to the capital campaign for the new home of the Asia Society Texas Center, which will be dedicated on April 12, 2012. And just recently, he helped us kick off the endowment phase for our new Texas Center by being the main attraction at a reception for major donors held in my home. At that meeting, it was announced that Yao had made the first gift to our endowment campaign.

One of the happiest memories of Yao is when he called to tell me that his lovely bride Ye Li had just given birth to their beautiful daughter Amy. We then celebrated the 30-day anniversary of Amy’s birth with Yao and family at Yao’s Restaurant, partially owned by Yao’s parents. The restaurant has a private dining room unlike any other, with tall chairs around a tall main table. The chairs are extremely sturdy with wide seats. I had to use one of the side supports to climb into my chair, and once seated my feet dangled above the floor. It was the same for almost everyone — except Yao Ming.

I have no doubt that the next stage of Yao’s career will be just as exciting as the one he has just left. He will continue to be a bridge between the U.S. and China, and he will continue to be the biggest symbol of that hugely important bilateral relationship. In addition to pursuing his interest with the Shanghai Sharks and representing the NBA in China, Yao will continue his philanthropic work through the Yao Ming Foundation. He will most likely maintain a home in both Houston and Shanghai and will return to school to complete his university studies in Shanghai to get a degree in computer science and economics, given the fact that during the time he would have normally been in college, he was playing basketball.

It is hard to imagine that there will be another Yao Ming, or that we could envision the future without Yao Ming.