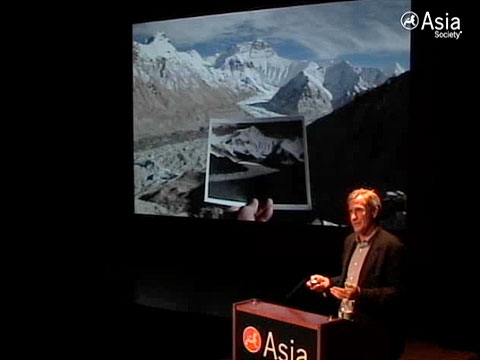 NEW YORK, July 14, 2010 - The Himalayan glaciers are melting at an alarming rate, as is starkly documented in photographic comparisons between archival images and recent photographs taken by mountaineer David Breashears in the new Asia Society Museum exhibition Rivers of Ice: Vanishing Glaciers in the Greater Himalaya.

That melting also has a profound impact on the local communities the Himalayan glaciers serve, and has emerged as a primary bellwether of global climate change.

Such were the conclusions reached by Breashears and his fellow experts in an Asia Society discussion, who put the photographs into a larger context. Vijay V. Vaitheeswaran, global correspondent for The Economist, moderated a panel comprised of Orville Schell, Director of the Asia Society Center on US-China Relations, Syed Iqbal Hasnain, an Indian glaciologist, and Bill McKibben, environmentalist and founder of 350.org, all of whom supplemented Breashears's visual evidence with their own perspectives on climate change as it affects this part of Asia.

Breashears's photographs show that some glaciers have lost up to 350 vertical feet of ice, or roughly the height of a 45-story building.

"Glaciers are quite literally on the run. [They reveal] a profound change of cause and effect that starts in the Himalayas," said Schell. Vaitheeswaran called the melting glaciers the "canary in the coalmine," a sign of a warming planet.

The glaciers feed major rivers across Asia, affecting hundreds of millions of people. "We have long thought of Tibet as this blank place on the map, now it is the source of all this hydrology," said Schell. He cited such examples as China's Yellow River, which traditionally ran into the ocean but now runs dry about a third of the year.

India's glaciologist, Hasnain, added India's monsoon season has become shorter and more intense in recent years. Breashears recounted local sherpas asking, "What are we going to do when the water runs out?"

On a global scale, the loss of ice on the Himalayan glaciers is a grim warning on climate change. "Most frozen things on earth are melting," McKibben warned. "Human beings have raised the temperature one degree, and NASA data indicates we have just come through the warmest six months in history."

Confronted with such dire news, one audience member asked what individuals, corporations, and governments can do. Schell called for global cooperation. "We [the US, China, India] need to get together to create a remedy, but we don't have a very good record of that."

McKibben stressed the importance of weaning the planet off fossil fuels and putting a price on carbon.

But climate change still has its skeptics, as was evident by one audience member who challenged the findings of the panelists. In response, McKibben replied, "This debate is between human beings and physics and chemistry, and that is a very hard debate to win."