Treasures Along the Silk Roads 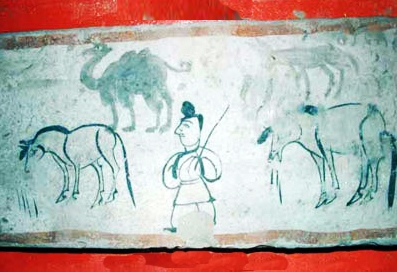 Overview:
Using slides of objects from the exhibition Monks and Merchants: Silk Road Treasures from Northwest China, Gansu and Ningxia, 4th to 7th Century, students will generate word maps that act as creative writing prompts.  The archaeological finds from western China act as entry points to introduce students to the rich cultural and artistic exchanges on the Silk Roads.  The students first encounter the artifacts through brainstorming through the teacher’s oral prompts.  The prompts are designed to encourage students to reflect on the cultures and history of the past through their own experiences and knowledge.  The resulting words or phrases are used to generate original writing samples.  The activity concludes with a discussion of these impressions, then returns to the artifacts’ historical, cultural, and artistic contexts.

Assessment:
Students will generate a word map and creative writing sample from the images in the Monks and Merchants slide packet

Procedure:
1.  Introduce students to the Gansu and Ningxia (pronounced Gan-soo, Ning-shah) regions of China, showing them on a map where this area is located.  Explain that the slides depict artifacts found along the Silk Roads from a time span dating between the 2nd and 7th century CE.  Many of the items were excavated in tombs around the region.  The artifacts offer a view of life along the Silk Roads in these ancient times through pictures, models and sculptures.  Some pieces represent a confluence of cultures, religions, and artistic styles.  Consider the pieces as a collection of the treasure trove of artwork celebrating the exchanges across the Silk Roads.

2.  Hand out unlined paper and pencil to each student.  Explain to them that you will be showing a series of slides.  For each slide, you will ask them to jot down responses to a phrase or question.  The responses should not be made in a list -- spread them around the paper as a collage of words that can act as a story starter later.  Slides could be shown from a few seconds to a minute, it is important for students to write the first ideas that come to mind.  Impress on students that there are no “wrong” responses.  The word map will act as a writing tool for a story or poem later.

3.   Show slides one by one.  For each slide read the prompts, allowing at least five seconds for each response.  Have students generate word maps as you read the prompts.  Do NOT read the descriptions of the artifacts to the students at this time.

4.  Ask students to use their word maps to generate a poem or short story based on one or more of the word prompts and the slides that were shown.

5.  When students have completed writing, have them share the products with the class.

6.  Show students the slides one more time.  This time, read the descriptions of the artifacts to the students as they are presented.  You may choose to generate more imaginative responses from the students by using both the writing samples and the descriptions of the objects.  Highlight the importance of art as representations of life and culture, and how the diversity of artifacts indicate the movement of people and the exchange of goods and ideas on the Silk Roads.

Go to the next page for image descriptions, links, and extension exercises.

Background information about burial objects in ancient China:
As early as the Neolithic period (8th to 2nd millennium BCE), Chinese tombs were furnished with grave goods like pottery, tools, weapons, and even horses and human sacrifices.  Scholars believe that this practice indicated a belief in the afterlife.  By the 5th century BCE, animal and human sacrifices were replaced by clay models while certain luxury items and daily necessities continued to be buried with the deceased.  Many clay models are in the shape of servants, buildings, and other daily necessities.  For archaeologists, the tombs and their burial objects became a sort of time capsule, as they are primary sources of information about daily lives in ancient China.

Slide 1:  Striding cavalry horse
Horses held special importance along the Silk Road, as the work animals of the nomadic people and, as with this figure, as part of a military force.   These animals were vital to maintaining Chinese military strength.  In 2nd century BCE, military expeditions to Central Asia brought stories about the so-called “blood sweating” horses with exceptional stamina and speed.  The quest to possess the best horses was one of the reasons for Chinese military and diplomatic missions to Central Asia.  This bronze figure of a horse was found in a tomb as part of a large procession of model horses, mounted warriors, chariots, and escorts.

Prompts:
What is one adjective to describe the character of the horse?


Slide 2:  Tomb brick with scenes of animal husbandry
A herder looks after his goats and two oxen on this brick that was excavated from a burial site.  This is one of many bricks from the interior of the tomb that had pictures of daily life painted on them.

Prompts:
What did the man call to his animals?

What are two products that came from these animals?


Slide 3:  Cavalryman and horse
This clay figure shows both man and horse covered with armor.  This clay figure was likely shaped in a mold, worked by hand and then placed in a kiln for firing at temperatures between 800 ºC and 1100 ºC before the finished paint.

What were the words this man said to his family before he left?

What are two items the man carried with him?


Slide 4:  Dancing Central Asian figure
The costume of this figure tells us that this is a Sogdian (pronounced Sog-di-en).   Sogdians were people who inhabited an area called Sogdiana, in modern-day Uzbekistan and Tajikistan.  They were important merchants on the Silk Roads.  In Chinese courts of the Tang dynasty, the most valued dancers were Sogdians.  Notice the figure’s large nose, which is another visible feature artists used to distinguish a Sogdian from a Chinese.

Prompts:
What is the name of the dance this man is performing?

Slide 5:  Seated Bodhisattva
Buddhism, one of the world’s oldest belief systems, was transmitted from India through Central Asia and into China by monks traveling with merchants and diplomats along the Silk Road routes.  Monks carried portable images like this one as a visual reminder of the teachings of the Buddha, which centers on compassion and overcoming the sufferings of the world.  This seated Buddhist figure wears a Chinese-styled robe rather than an Indian costume.  The artists in this region consciously adopted Chinese features and adornments in their representations of the Buddha, attesting to a confluence of different cultures and artist traditions.

Prompts:
Name the sounds of meditation

What would be the Buddha’s wish for the world

Slide 6:  Wall painting of an Apsara
What is left of this wall painting allows us to see that bright, rich colors were used to create the apsaras (pronounced ap-sa-ra), music-making celestial creatures who often accompany Buddhist deities.  This fragment comes from one of the walls of the Maijishan (pronounced My-jee-shan) Caves where hundreds of religious paintings are found.  Artists often depict apsaras with billowing drapery and scarves to indicate that they are in flight.

Prompts:
What does the apsara figures see from their celestial (heavenly) stance?

What is the first line of a song the apsara might be singing?

Slide 7:  Gold Byzantine Coin
This gold coin pictures the Byzantine emperor Justinian I.  In his hand is a globe topped with a cross, signifying that the whole world is subject to him.  The other side of the coin shows an angel holding a cross.  This coin was excavated from the tomb of Tian Hong (pronounced Tee-en Hung) who died in 575 CE.  The discovery of foreign coinage in Chinese tombs demonstrates that they may have been collected as precious objects rather than for their use-for foreign currency would have no intrinsic monetary value outside of the countries of origin on the Silk Roads.

Prompts:
What are two items this coin was used to buy?

What was the job of the last owner of this coin?

Proceed to the last page for an extension exercies.

Extensions:
The students have given the objects an individual story or ‘history’ in their writing accounts.  Have the students investigate the ‘real history’ by writing on one of the artifacts or about the time and place in which the object originated.  Report findings to the class.  Be certain to indicate connections to cultural, artistic, religious, and economic exchanges that these artifacts may represent.