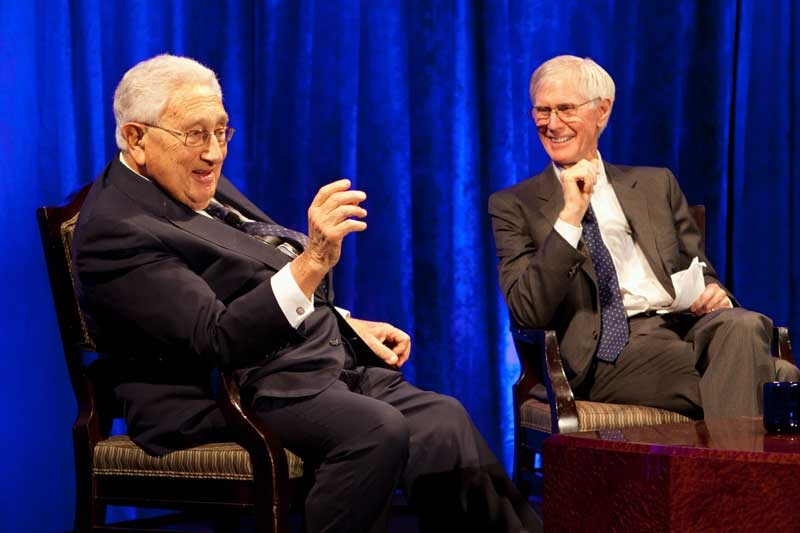 WASHINGTON, June 15, 2011 — Dr. Henry Kissinger, Nobel Peace Prize winner and former U.S. Secretary of State, was awarded the Lifetime Achievement Award at the Asia Society Washington Awards Dinner here at the Ritz-Carlton. He appeared on stage in conversation with Orville Schell, Arthur Ross Director of the Asia Society's Center on U.S.-China Relations. Following is a transcript of their conversation.

HENRY KISSINGER: It's a great privilege to be here and I deeply appreciate the words of the Ambassador [Zhang Yesui] and of my old friend Ronnie Chan.

ORVILLE SCHELL: Well, maybe we should start with what the Ambassador said at the end, that the challenge is to try to find some way for the U.S.-China relationship to move from crisis to crisis to something of a more common or shared nature. How are we going to do that?

HK: Well, we are now in an international situation for which there is no precedent in history. On the one hand, there is turmoil in many parts of the world. At the same time, there is a series of problems that can only be dealt with on a global basis. Issues like environment, energy, nuclear proliferation, cyberspace. And that makes it imperative for the two strongest nations that are existing in the world today to move in a cooperative manner, because if they don't, every issue in the world will become an issue between great powers, and the danger of matters getting out of control and the loss of the possibility for creative joint efforts would be a tragedy.

OS: So, any evolution of a relationship really needs actors to do something. What do you think both the United States and China, the leadership of each of these two countries, could do, and perhaps should do, to try to move us substantially in the right direction?

HK: The leaders of the two countries now meet quite frequently, but it is in the nature of day-to-day policy that they tend to concentrate on the issues that are before them at the moment. What needs to be done as a next step is to try to discuss a vision of the future that we would like to bring about, both China and the United States. And if we then think of common projects that can be done jointly so that there is an experience of working together, not only in the abstract, but on a series of concrete issues that are before us. And that is why in my book I talk about a Pacific community that links us together in some joint enterprises. And what these are, that is, what should be determined in these meetings and then they should be supported by so called track-two efforts that can be done through organizations such as this, where serious concerned individuals try to fill in the design.

OS: Here, I should tell all of you who've not done so, Dr. Kissinger's book, I've been finding it extremely interesting. It's a curious book, because it begins with history for about half of it and then it goes into your life, your experience, and you clearly have a fascination with history. And I wonder, given that sort of study that you did to find sort of the roots of Chinese conceptions of diplomacy, what do you think the Chinese vision of the future is? Where do you think that the history as China is living it is moving towards?

OS: You wrote a dissertation, did you not, on Hegel?

HK: I wrote a dissertation of staggering profundity ...

HK: Not on Hegel, but on Spengler, Toynbee and Kahn. As an undergraduate. It was ...

OS: Well, let's focus a little bit on the motion of history.

HK: I think both China and the United States face this problem. We both believe we are an exceptional society, that we have values of universal relevance. Americans tend to believe that they can be spread by conversion, that everybody can learn them. The Chinese believe, first that they are bound by the Chinese culture and that the Chinese influence spreads by example rather than by conversion. China has not had until recently an experience of having to deal with countries of similar magnitude, so what China would probably attempt to do is to apply, to see to what extent some of the Confucian principles can be applied to international affairs, and that is not necessarily incompatible with what Americans believe. And in any event we have to learn to use, to understand each other's fundamental approach and relate them to the common ground.

OS: You've been often criticized, and sometimes very sternly, for insufficiently (in the view of your critics) embracing the notion of sort of the American principle of democracy and human rights. Now, forgetting for a minute whether the criticism is justified, what do you think the proper posture of America ought to be at this point in history towards China on those principles which, as you've pointed out, it can be very messianic about?

HK: Human rights and democracy are fundamental principles of American thinking. And they will be affirmed and should be affirmed by the United States as objectives of American policy. Where I part company on occasion is the attempt to achieve them by sanctions and pressure. I strongly favor affirming them by example, and we have every right and indeed every duty to affirm what we believe in, but I also believe that the evolution of societies, including a society with the long history of China, has, in important ways, to be left to its own internal dynamics, towards which we have attitudes, but as a basic principle I have preferred a policy of engagement to a policy of confrontations.

OS: Do you think, by that logic, then the best that this country could do is to be a better example and leave it pretty much at that?

HK: No, there can be events to which we express our opinion. But when we conduct policies that amount to a deliberate promotion of regime change in other countries, we will generate intense resistance and we have to see that in relation, we have to see those measures in relation to other objectives in which the preservation and creation of a peaceful world is also an important moral value.

OS: I think if there is one thing that you are most known for, it's this idea that there can be breakthrough moments, and in fact we did experience such a moment in the early '70s. I wonder if you imagine ...

HK: But you can't invent them. You can understand them and exploit them, but if you try to conduct foreign policies through a series of breakthrough moments you will create chaotic conditions.

OS: And to what degree do you think that the ability to seize such moments depends on having very strong leaders on both sides who can act deliberately without being bogged down in too much factionalism, debate or inner-party ...

HK: What you need is a Chinese concept, which I think is called qi, which relates to the — there is no English word for it — it is the confluence of forces, the propensity of events in their totality, and the momentum that these events generate. In order to have a breakthrough, one needs the ability to understand that events are related and have a history if one wants to project them into the future. I know the implication of your question is that democracies cannot do that, but that isn't true.

HK: That's what I mean. We did do it, and we have many examples in our history where breakthrough thinking could, but the essence of breakthrough thinking is [not only] to be able to understand the nature of the immediate situation but to project it into the future. Leaders take, the leader is to take his people from where it is to where it has never been. And that requires, above all, courage and vision. It may be in the nature of modern society that the technical problems of maintaining it on a day-to-day basis discourage this long-range thinking, but I would judge the leaders by their ability to handle it.

OS: As you look back over the last number of decades in your own life, but also the history of our country, what moments do you see of this nature that were not taken up, that were missed? And do you have any regret about a moment that in retrospect you think you could have taken up and put some dilemma to a different end?

OS: You've wrestled with some pretty tough ones.

HK: For better or worse, I served in a very turbulent time, and amidst profound national divisions. So I would like to think that while mistakes were undoubtedly made, that we didn't miss any breakthrough moments and that we seized some in the Middle East, and we had the good fortune of being able to serve at a moment when a breakthrough to China was possible. But there may be others who have a better vision.

OS: Finally, let me ask you — because I am sure everybody out here is going to want to read it — if you had to sum up in a somewhat sound-bitten way what you think your book is trying to say to us and why you wrote it, what would you say?

OS: Go ahead and take two.

HK: ... then I missed something. What I tried to do is three things: To explain to the best of my understanding, based on 40 years of experience, the conceptual interaction of Chinese and Americans in dealing with their problems, how each side looked at this, and to illustrate that with a series of concrete examples from the beginning of the interaction after the Communist victory in the Chinese Civil War.

The second was to illustrate how this translated itself into the actual interaction. And the third was to explain why that relationship is so crucial for peace and progress in the world and how both sides — and I repeat, both sides — have to adjust their traditional thinking, or their historic thinking, to the new necessities. And while I wind up with saying we have to go from crisis management to a sense of community of things we actually do together, I also understand, as a historian and as a practitioner, that this is not what history teaches you. History teaches you that this might lead to conflict, so the challenge of our times is to transcend that part of experience and to move towards a sense of community. Those are the themes of the book and there are many detailed examples that illustrate this.

OS: And are you optimistic?

OS: That you are. Thank you, Dr. Kissinger.