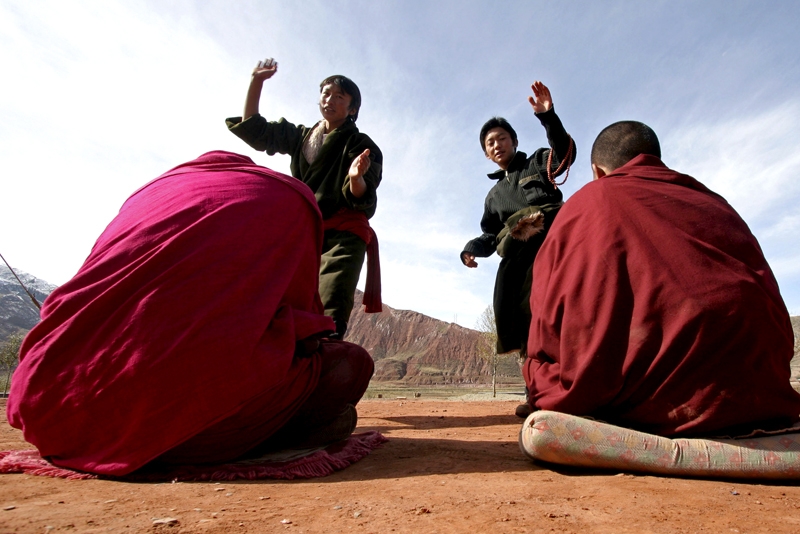 Since the time of the early Buddhist kings, Tibet has enjoyed a rich history of philosophical enquiry and carries this heritage forth today. Buddhism is a "wisdom tradition," meaning that it is based on the realizations or insights of the historical Buddha and that it holds that all suffering and even the suffering of death are related to a failure of wisdom. They hold that one is freed by wisdom, by seeing the nature of things. Philosophical debate is part of this effort. In India, debate was so valued that, if you lost a debate with an opponent, you would have to convert to the view of that opponent. If you cannot defeat a view, then you are compelled to accept it.

The central purposes of Tibetan monastic debate are to defeat misconceptions, to establish a defensible view, and to clear away objections to that view. Debate for the monks of Tibet is not mere academics, but a way of using direct implications from the obvious in order to generate an inference of the non-obvious state of phenomena. The debaters are seeking to understand the nature of reality through careful analysis of the state of existence of ordinary phenomena, the basis of reality. This is the essential purpose for religious debate.

In practice, the usual form is a debate between a Challenger, standing and asking questions, and a Defender, sitting and answering those questions. The attitude is as if the Challenger is respectfully approaching the Defender with a quandary. The dramatic clapping is done by the standing Challenger only, and is used to punctuate the end of the "question," which is an argument in response to the Defender's answer.

In their understanding of the gesture, the right hand represents method, meaning especially the practice of compassion, and the left hand represents wisdom. Bringing the two hands together represents the joining of wisdom and method. At the moment of the clap, you hear the left foot stomp down and that represents slamming shut the door to rebirth in the lower levels. After the simultaneous clap and stomp, the Challenger holds out the left arm of wisdom to keep shut the door to all rebirth. Also, in that gesture, the Challenger uses his right hand to raise up his prayer beads around his left arm. This represents the fulfillment of the efforts of compassion, in lifting up all suffering beings out of the round of rebirth.

The Tibetan argument forms were brought over with minor adaptations from the Indian logical forms. In this system of reasoning, two forms of argument are used to defeat wrong conceptions and to support a clear understanding. These are syllogisms, consisting of a thesis and a reason stated together in a single sentence, and consequences, an argument structurally similar to a syllogism but merely a logical outflow of an opponent's assertions. A valid argument may take the form of either a syllogism or a consequence. The form of a syllogism generally used in the Tibetan philosophical literature and in debate consists of a thesis and a reason, both what is to be proven and the proof, in one sentence:

The subject, sound, is an impermanent phenomenon because of being a product.

However, what you generally hear in philosophical debate are consequences, which are not "promises" but are logical implications drawn from the Defender's statements. The Defender is limited to several answers to the Challenger's arguments. These answers include:

(1)"The reason is not established," which is the way of denying the minor premise;

(2) "There is no pervasion," which is the way of denying the major premise; and

(3) "I accept it," meaning that the Defender accepts the argument and the conclusion.

Reliable tools and procedures are called "reliable" because they help us to understand what is factual and accurate, what is real and what is unreal. Thus, the tools used in Buddhist reasoning should apply not only to topics of Buddhist philosophy but also to anything we wish to look into. The actual tools and procedures are simple and elegant, so they are useful to many. The style of Buddhist reasoning and debate provides a useful way of organizing your own thought and words and for assessing the flood of information that is coming our way.

Daniel Perdue is author of Debate in Tibetan Buddhism.