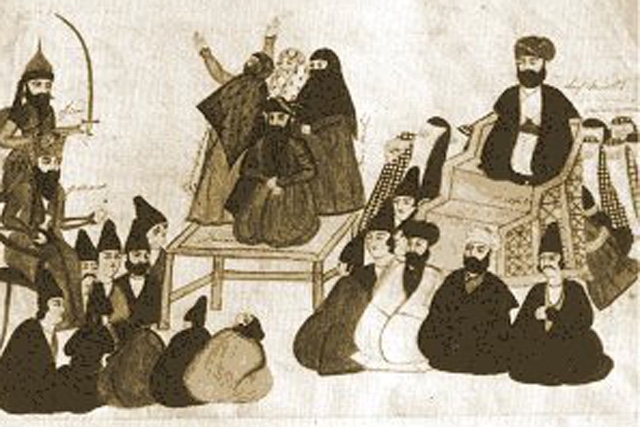 Religious epic theatre, ta'ziyeh or shabih, continues to be performed in areas of the Middle East with large Shi'a populations: Iran, Iraq, Southern Lebanon and Bahrain. Processional forms of this drama are also seen in India, Pakistan and even places far removed from Asia where Shi'a Muslim populations exist, such as Jamaica. However, the most elaborate, full-blown dramatic performances of ta'ziyeh continue to be performed in Iran.

Performances of ta'ziyeh are given both by 'professional' troupes of players and by villagers in amateur performances. Many small towns and villages have erected special buildings hoseinieh specifically for the performance of mourning ceremonies during the month of Muharram. It is most often in these buildings that ta'ziyeh is performed, although an open-air playing space may also be constructed to accommodate large crowds, live animals and dozens of players, some on horseback.

Whether the performers are amateurs, or professionals hired for the occasion, the staging of ta'ziyeh is a community affair, with cooperative funds committed for the purpose. Performances may be long or short, but they often take place all day, particularly on the ninth and tenth days of the Islamic month of Muharram, called Tasuâ and Âshurâ respectively, the latter being the day of the martyrdom of Imam Husain. A noon meal may be provided for spectators, and the performance may be preceded or followed by communal mourning ceremonies, consisting of processions, religious chanting, and self-flagellation. Often persons leave a bequest in their wills to contribute financially to the annual support of these rituals.

Participants and spectators do not view ta'ziyeh as theatre, but rather as part of ritual mourning. Nevertheless, ta'ziyeh has many theatrical conventions. The players do not, by convention, memorize their roles (though many have memorized them through years of repetition); rather, they read them from strips of paper held in their hands called tumâr. The parts are not welded together in a common script, but are maintained as separate scripts with cue lines for each role, akin to "sides" used in Western theatre. The 'good' characters, on the side of Imam Husain. chant their lines in classical Persian musical modes, and wear the color green. The 'bad' characters declaim their lines in stentorian tones and wear the color red. Women's roles are taken by men, who wear black, and veil their faces. The performances offer a number of roles for children, played by young boys, who are also dressed in black, but are unveiled, whether they portray male or female characters.

Several forms of staging exist, but most observe the convention of having one area for the camp of Imam Husain, and another area in the same open playing space for the camp of the enemies. A third space may represent Damascus. the seat of the Umayyid governor, Yazid. who ordered the death of the martyrs. A fourth area usually contains props. When characters are not 'on stage' they often do not leave the playing area, but merely retire to their playing space, drink tea, and converse. When moving in the playing area, spaces traversed in circles or arcs represent long distances. and straight lines are short distances.

Each of the first ten days of Muharram is the occasion for the staging of a different performances depicting the death of each of the relatives and supporters of lmam Husain. Typically on the day of Âshurâ a synoptic performance is given where all of the martyrs' deaths are presented in a single recounting.

Over the years a number of 'secular' ta'ziyeh performances developed around other religious or even political themes, including events preceding or following the martyrdoms at Kerbala. and also other religious or even secular themes including Moses and the Pharaoh, and Solomon and the Queen of Sheba. These included even 'comic' ta'ziyeh performances, such as 'The Binding of the Thumbs of the Demon' which has a masked figure playing the demon's role, whose thumbs are bound by the child, Ali, until he repents of his bad behavior. However, all of these performances eventually turn back to the events of Kerbala.

Ta'ziyeh performances have suffered a decline in the 20th century. Immensely popular, they are none the less suspect from both a religious and a political standpoint. Religious officials were always uncomfortable with the depiction of actual historical figures on stage. Political officials did not like huge gatherings of people mourning injustice. Nevertheless, the performances continue unabated in many parts of the Shi'a world. The influence of these traditional forms is deeply felt in the modern theatrical tradition of the Middle East. Despite the importation of Western style theatre to the region in the 20th century. When native writers have attempted original work the most successful productions have always contained elements of these traditional performance genres.