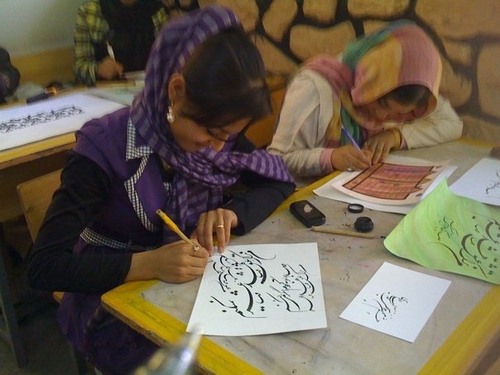 Persian is spoken today primarily in Iran, but was historically a more widely understood language in an area ranging from the Middle East to India. Significant populations of speakers in other Persian Gulf countries (Bahrain, Iraq, Oman, People's Democratic Republic of Yemen, and the United Arab Emirates), as well as large communities in the USA.

Total numbers of speakers is high: over 23 million Persian speakers (about 50% of Iran's population). (Source: http://www.lmp.ucla.edu/Profile.aspx?LangID=63&menu=004)

Persian has been listed as a critical language by the American State Department since 9/11/2001 because of our strategic business and security interests in the Middle East. We are currently engaged in a war in two nations where Persian is commonly spoken. Iran has large oil reserves and is an influential power in the Middle Eastern region.

According to the 2000 census there are 312,085 Persian speakers in the United States. In 2006 2,037 higher education students were studying Arabic and no measurable amount of students studying it in grades K-12.

West and East Iranian comprise the Iranian group of the Indo-Iranian branch of the Indo-European family of languages. Indo-Iranian languages are spoken in a wide area stretching from portions of eastern Turkey and eastern Iraq to western India. The other main division of Indo-Iranian, in addition to Iranian, is the Indo-Aryan languages, a group comprised of many languages of the Indian subcontinent, for example, Sanskrit, Hindi/Urdu, Bengali, Gujarati, Punjabi, and Sindhi.

Scholars recognize three major dialect divisions of Persian: Farsi, or the Persian of Iran, Dari Persian of Afghanistan, and Tajik, a variant spoken Tajikistan in Central Asia. We treat Tajik and Dari as separate languages, however. Farsi and Dari have further dialectal variants, some with names that coincide with provincial names. All are more or less mutually intelligible.

Dari, mainly spoken in Afghanistan, until recently, deferred to the Tehran standard as its model, and although there are clear phonological and morphological contrasts, due partly to the influence of neighboring Turkic languages, Farsi and Dari remain quite similar. The dialectal variation between Farsi and Dari has been described as analogous to that between European French and Canadian French. Dari is more conservative in maintaining vowel distinctions that have been lost in Farsi.

Luri and Bakhtiari, languages in the southwest part of Iran, are most closely related Farsi, but these are difficult for a speaker of the Teheran standard to understand . While speakers of Luri regard their speech as a dialect of Persian, speakers of Farsi do not agree. Judaic Persian, written in Hebrew characters and used by Jews throughout Iran, is close to the Persian standard in its written form. However, many Iranians of Jewish descent have left the country and no longer form a significant portion of the population.

Persian, until recent centuries, was culturally and historically one of the most prominent languages of the Middle East and regions beyond. For example, it was an important language during the reign of the Moguls in Indian where knowledge of Persian was cultivated and encouraged; its use in the courts of Mogul India ended in 1837, banned by officials of the East Indian Company. Persian scholars were prominent in both Turkish and Indian courts during the fifteenth to eighteenth centuries in composing dictionaries and grammatical works. A Persian Indian vernacular developed and many colonial British officers learned their Persian from Indian scribes.

Persian is the first language of about 50 percent of the population in Iran, and is the country's official language. It is the language of government, the media, and school instruction. Of the rest of Iran's population, 25 percent speak related Western Iranian languages and 25 percent speak Arabic, New Aramaic, Armenian, Georgian, Romany, and Turkic languages.

In Afghanistan, Dari, along with Pashto, are official languages of the country. The language is taught in schools and radio Afghanistan is promoting a standardized pronunciation of the literary language. The Persian spoken in Teheran serves as a model for more formal styles, but some colloquial styles are closer to Tajik. Only minor lexical differences exist between the literary forms used in Iran and Afghanistan. Although both Pashto and Dari are official languages, Dari has a special social status in the country because of its historical prestige; it is the preferred language for communication among speakers of different linguistic backgrounds.

Old Persian is attested from the cuneiform inscriptions left by the Achaemenid dynasty (559 to 331 BC.) that ruled the lands known as the Realm of the Aryans (from which comes the name of the modern country Iran) up until the conquest of Alexander the Great.

Middle Persian, also known as Pahlavi, after the Parthians who ruled Persia after the collapse of Alexander's Empire, is known chiefly through its use in Persian's pre-Islamic Zoroastrian religious writings.

The origin of Modern Persian is not clear. Although greatly influenced and closely affiliated to Middle and Old Persian, there is no conclusive evidence that it is directly descended from these languages. It may instead derive from a Pahlavi dialect once spoken in northeast Iran.

Old Persian, by contrast, and its immediate descendant Middle Persian, originated in a province in southwest Iran that was once the center of the Persian Empire -- Parsa or Fars, hence the contemporary Persian name of the language: Farsi.

The Early Modern period of the language (ninth to thirteenth centuries), preserved in the literature of the Empire, is known as Classical Persian, due to the eminence and distinction of poets such as Rudaki, Firdowsi, and Khayyam. During this period, Persian was adopted as the lingua franca of the eastern Islamic nations.

Extensive contact with Arabic led to a large influx of Arab vocabulary. In fact, a writer of Classical Persian, had at one's disposal the entire Arabic lexicon and could use Arab terms freely either for literary effect or to display erudition.

Classical Persian remained essentially unchanged until the nineteenth century, when the dialect of Teheran rose in prominence, having been chosen as the capital of Persia by the Qajar dynasty in 1787. This Modern Persian dialect became the basis of what is now called Contemporary Standard Persian. Although it still contains a large number of Arab terms, most borrowings have been nativized, with a much lower percentage of Arabic words in colloquial forms of the language.

The term "Persia(n)" derives from the Greek and is based on the Ancient Greek reference to the whole region. "Farsi" is the Arabic equivalent for the name of the southwestern province of Parsa the locus of various Persian dynasties. "Iran" derives from an Old Iranian word (Windfuhr 1987).

American Community Survey puts the population at 329,348 speakers in 2005 (http://www.mla.org/cgishl/docstudio/docs.pl?map_data_results)

Modern Language Association data show that college and university enrollments in Persian have increased by 82.5% between 2002 and 2006, from 1,117 to 2,037. Despite this only .001% of students studying a foreign language in America higher education study Persian.

FLAS Allotments for 2007: There are 17 National Resource Centers and 17 FLAS INSTITUTIONS that have received FLAS funding for Middle Eastern languages in 2007. 182 FLAS Fellowships have been allotted for Middle Eastern languages at these institutions totaling a budget of $4,015,000. Persian is a common language of the Middle East and is offered at all these institutions under the FLAS grant. (Source: http://www.ed.gov/programs/iegpsflasf/awards.html)

According to a survey conducted by the American Council on Teaching Foreign Languages entitled, Foreign Studies Enrollment in Public Secondary Schools, Persian does not have an enough language learners to be featured as an individual category but rather it is a part of the Less Commonly Taught languages category that they have titled “Other.” According to this category, 66,623 7-12 students are studying languages other than French, German, Italian, Japanese, Russian, Spanish, SNS, African Languages, ASL, Arabic, Czech, Chinese, Cantonese, Greek, Haitian, Hebrew, Korean, Native American, Polish, Portuguese, or Vietnamese. This indicates that 1% of all 7-12 language students studied a language other than those listed in detail here. 71,948 K-6 students studied a language other than French, German, Italian, Japanese, Latin, Russian or Spanish. Report available at: http://www.nvtc.gov/lotw/months/november/USschoollanguages.htm

According to the website of Less Commonly Taught Languages, 0 Primary and Secondary schools teach Persian: http://db.carla.umn.edu/lctl/FMPro

Persian is an Official Language of Iran.

There are also a significant number of Persian speakers in Bahrain, Iraq, Oman, People's Democratic Republic of Yemen, and the United Arab Emirates.

To provide comparison, America’s exports for this same period to the five nations with English as their national language was $356,436 million, which has increased by 513% since 1985. In 2007 the United States has imported $434,481 million in goods from these countries, an increase of 446%. (Source: http://www.census.gov/foreign-trade/balance/index.html)

In response to the 9/11 terrorist attacks, the National Foreign Language Center (NFLC) convened in January 2002 with the leaders from the intelligence, defense, diplomatic, and education communities to identify the deficiencies in language resources and establish the critical need for language learning to stem the war on terrorism. Increasing language acquisition of critical languages has been one of the main approaches to bolstering security since 2001. The National Security Agency, the Pentagon, State Department and major intelligence units of the US government have cited Persian as a critical language because of the central role Iran has played in geo-politics in the last quarter century.

US-Iran relations has been strained for decades. Since the 9/11 attacks, America’s foreign policy has perceived Iran as an aggressor that supports anti-Western terrorist operations particularly in relation to American occupation in neighboring Iraq. Furthermore, Iran is a nuclear power that refuses to compromise on non-proliferation treaties. Iran has a large amount of oil reserves, a market that the western world has not fully tapped because of its poor relations with the U.S. and other major nations on the U.N. Security Council. There is a large Iranian population in the United States that fled the revolution.