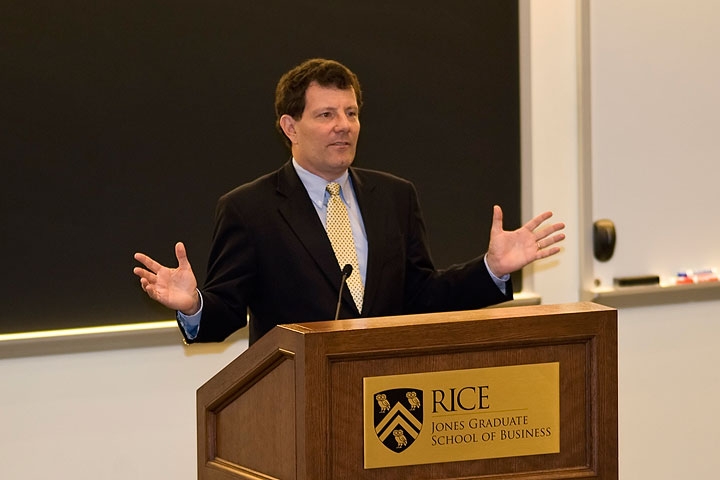 Kristof delivered that message in a talk coinciding with the release of his new book Half the Sky: Turning Oppression Into Opportunity for Women Worldwide, co-written with wife Sheryl WuDunn. He spoke before nearly 300 people at Rice University at an event co-presented by Asia Society Texas Center, World Affairs Council of Houston, Brazos Bookstore, University of Houston Friends of Women’s Studies, and Rice.

"There’s no silver bullet, but education comes the closest," he said. For example, educating girls in a country like China can lift the economic fortunes of an entire village as school-trained women go off to work in big-city factories and send money home to their families. More money then becomes available to educate more girls, creating a "virtuous circle," Kristof said.

He also drew a connection between medical care and educational opportunities. A 50-cent pill can free a child of intestinal worms. That in turn means she attends school an average of 30 more days a year, he said.

Kristof spoke at length on the baleful effects of poor medical care for girls and on the still widespread practice of forced prostitution.

Wordwide, girls are 50 percent more likely than boys to die between the age of 1 and 5, he told the audience.

In developing countries, "If a son is sick, you take him to the doctor. If a girl is sick, you feel her forehead and say, 'Let's see how she feels tomorrow.'"

Kristof recounted the story, first reported in his Times op-ed column, of how he bought the freedom of two teenage prostitutes held in virtual slavery in a brothel in Cambodia. "When you can get a receipt for buying a human being, that's a real blemish on the 21st century," he said.

Microloans are among the positive developments affecting women's lives in developing countries, Kristof said, illustrating that with the story of a Pakistani woman who created a now-thriving embroidery business.

Discussing foreign aid in general, the two-time Pulitzer Prize-winner acknowledged that "helping people is harder than it looks. But we're getting better at figuring out what kind of aid works."