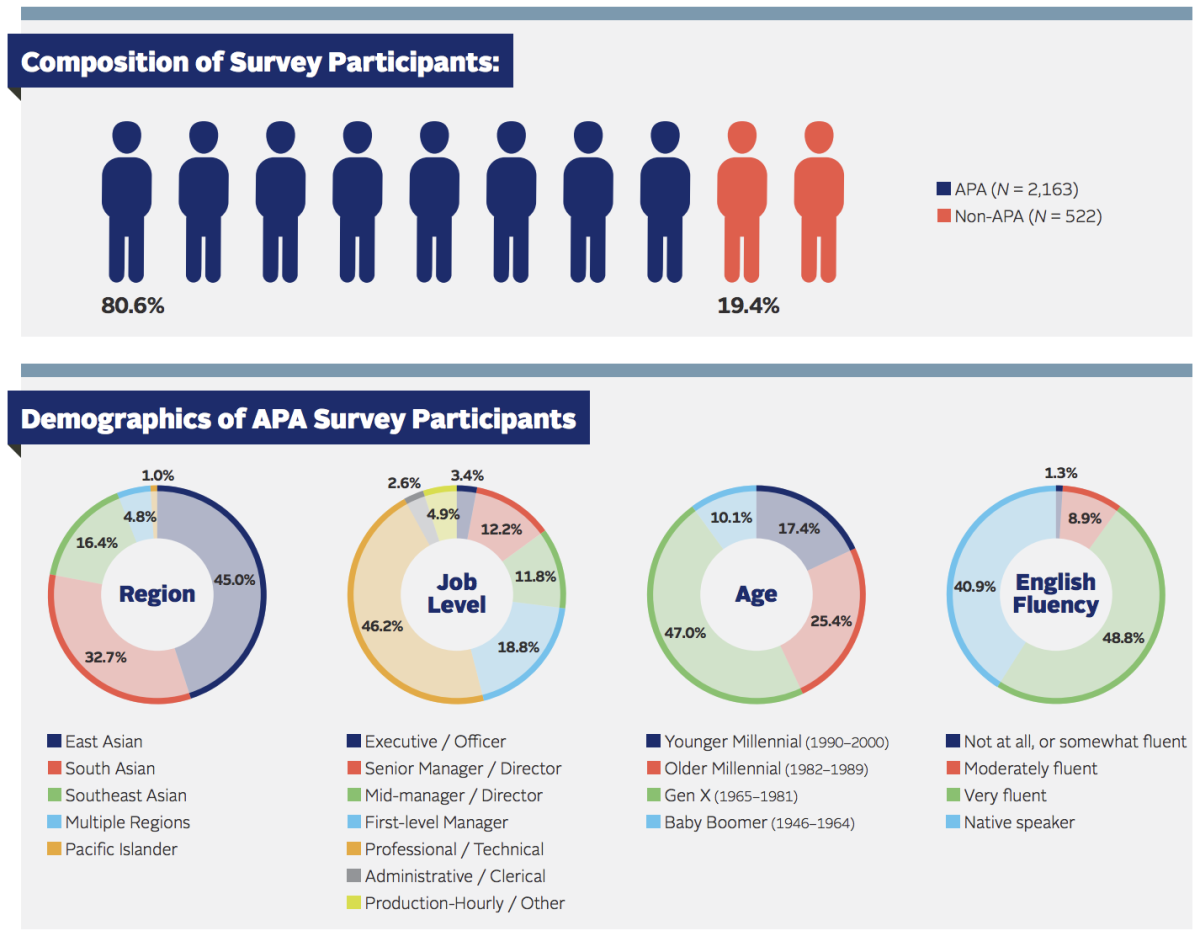 NEW YORK, May 15, 2019 — Results from Asia Society’s 2019 Asian Corporate Survey, which examines the perceptions and lived realities of Asian Pacific American (APA) employees in the U.S. workplace, show a slight but steady decrease over the last two years in Asian and APA employee satisfaction with professional growth opportunities at their companies, while some companies have notably made progress in their workplace diversity practices and initiatives.

More than 2,500 employees participated in the survey, which included over 500 non-APA employees in order to provide greater context for comparison and benchmarking in how they viewed their companies. Almost 70 percent of APA survey respondents identified themselves as first generation. Close to half of the respondents are in technical roles, while 3.4 percent are on the chief executive level.

Two main findings from this report:

The decrease in job satisfaction, while not precipitous, is still notable as APA employee favorability was trending upwards prior to 2017 in the four-year study. Many APA respondents, in significant contrast to their non-APA counterparts, noted a shortage of company executives and directors from their cultural background and a lack of leadership development opportunities for them.

APA respondents also cited that they did not feel a strong sense of belonging in the workplace, sometimes due to differences between their personal upbringings and American work culture. For example, one APA survey respondent cited cultural differences in communication styles, noting“our traditional culture of being humble, reserved, and a team player when practiced in a professional setting tends to be misunderstood for being timid, quiet, and lacking in leadership.”

The report also highlights employers who were previously announced as the winners in Asia Society’s 2019 Best Companies for Asian Pacific Americans for their noteworthy efforts in developing and promoting APA talent. Discover, named Overall Best Employer by Asia Society this year, for instance runs a company-wide Chinese dragon boat race to help educate their employees on its cultural significance. Goldman Sachs, also an award-winner this year, manages a “Presentation Skills Boot Camp” for their firm-wide Asian Professionals Network to help APA employees enhance their presentation skills.

The gender representation in this survey was approximately equal between women and men, with 0.1 percent identifying as transgender. Almost half of the respondents were Gen X (born between 1965-1981) which may explain the cultural mismatch, followed with millennials (born in 1982-2000), and baby boomers (born in 1946-1964). Almost 60 percent of them have been with their employer for more than five years.

Asia Society is the leading educational organization dedicated to promoting mutual understanding of Asia in a global context and strengthening partnerships among peoples, leaders and institutions across the fields of arts, business, culture, education, and policy. Founded in 1956, Asia Society is a nonprofit, nonpartisan, educational institution based in New York with state-of-the-art cultural centers and gallery spaces in Hong Kong and Houston, and offices in Los Angeles, Manila, Mumbai, San Francisco, Seoul, Shanghai, Sydney, Tokyo, Washington, D.C., and Zurich.

Global Talent Initiatives (GTI) is a unique global resource/platform made up of intellectual capital on the latest trends and thought leadership impacting senior level, Fortune 500 human capital and talent leaders in corporate, civil and academic organizations for best talent development practices. The GTI Platform includes: Global Talent and Diversity Council (GTDC), made up of Chief Talent, HR and Diversity Officers of Fortune 500 companies, and advises Asia Society on how best to leverage its public voice in the area of global talent and diversity.