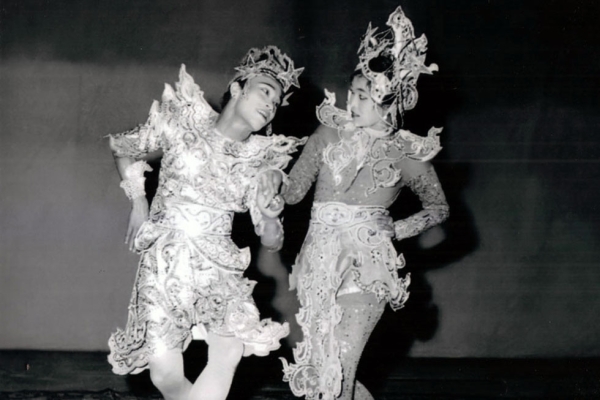 On April 10-12, 2015, Asia Society presents three events with Myanmar's Shwe Man Thabin performing arts troupe. The events are part of Myanmar's Moment, a programming series built around the Asia Society Museum exhibition Buddhist Art of Myanmar, which runs from February 10 to May 10, 2015, in New York City.

A zat pwe in Myanmar is a popular all-night outdoor theater performance that began in the late 1800s, and has continued in Burmese history through the present. An evening of zat pwe presents a panoply of music, song, dance, drama, and comedy all led by a male stage star known as a mintha, accompanied by his female counterpart, a minthamee, and an ensemble of clowns. The music of the hsaing waing (a traditional percussion-gong-oboe ensemble in Myanmar) is integral to every moment on stage. A zat pwe continues all night, ending with the first rays of the morning sun.

The zat pwe blends cultural and historical elements gathered from a variety of sources: from the legacies of dance in the old royal courts, to marionette theater traditions, to the Buddhist teachings of the jataka tales, to contemporary dramatic plays addressing social issues such as drug addiction, family crises and corruption, and clowns who use humor to address risqué local politics and gossip. As part of a living tradition, it has come to seamlessly incorporate these elements of both old and new influences, spanning the breadth of Myanmar culture to incorporate tradition and religion with modern-day realities. 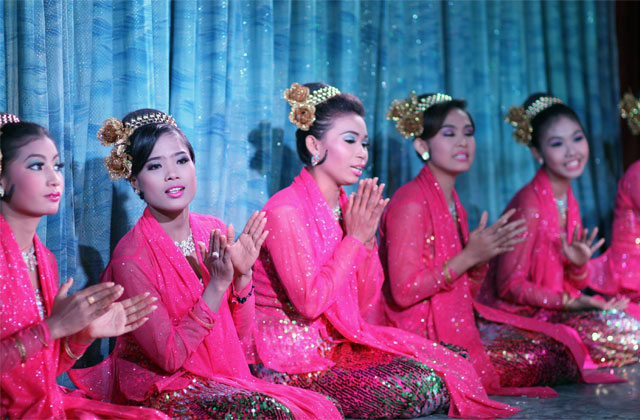 An evening of zat pwe presents a panoply of music, song, dance, drama, and comedy. Today's audiences keep up to date with zat troupes through social media. (Rachel Cooper)

Myanmar’s population, cultures and languages are diverse, with the Bama or Burmans, making up 68% of the population, forming the majority ethnic and linguistic group. Theravada Buddhism is the predominant religion of the Burmans. Myanmar also has a pre-Buddhist Animist tradition that worships a pantheon of spirits, each referred to as a “Nat.” Nat worship is often incorporated into Buddhist practice in Myanmar, as is illustrated within the context of zat pwe, where performers make offerings first to the Buddha to cultivate mindfulness, and then to a Nat who, when propitiated, will bless them with a successful performance. The zat pwe takes place within the context of religious ceremonies. They are sometimes sponsored by donors in the community who wish to gain merit by hiring troupes for Buddhist Pagoda festivals.

Zat in Burmese refers to the jatakas, the 550 stories from India of the Buddha’s earlier incarnations that serve to instruct moral behavior. Zat in Burmese also refers to a troupe of performers and an all-night outdoor variety show performance (pwe). The culture, history and artistic languages of zat are known as zat thabin: the world of zat theater which reflects the culture of Myanmar, past and present.

The zat pwe format was modeled on marionette theater (yok thay pwe) and became the human expression of marionettes dramatizing the jataka tales. Marionettes were the dramatic characters narrating the Buddhist jatakas in both the royal court, as well as among subjects. In the late 18th century, the court issued edicts about high and low drama: high drama was the telling of jatakas with music by marionettes, whereas human dancers were relegated to low drama.1

As zat thabin actors and dancers took on the characters from marionette jataka dramas, some of the movements of the marionettes were exaggerated through human imitation, and embellished by elegant royal court dance classical movements of great early 20th century dancers such as Aung Bala, Sein Gadon and Po Sein. Audiences were enraptured by the intimately familiar marionette movements and tempos: the stylized gestures imitating the jerkiness of puppets; stiff hands; the human “marionette” crashing to the floor at a coda; and female dancers kicking a trailing white train with their feet. The close relationship in movement styles between classical Myanmar dance and the long tradition of marionettes in Myanmar have merited much commentary over centuries.2

In fact, as far back as 802 C.E., during the Pyu Kingdom in Myanmar, a troupe of Pyu (P’iao in Mandarin) musicians and dancers traveled to perform at the Xian Court in T’ang Dynasty China. Lively descriptions of the dance were recorded by Chinese scribes, whose reports of the movements were strikingly similar to the Myanmar dancers of today. One poet present at the performances wrote a poem with a description of the dancers: “bending to the right and left, they danced as though being intoxicated with the wine of music.” He cautioned that “even if you kneel down on the ground and pray to Heaven, you will never learn Pyu music and dance.”3 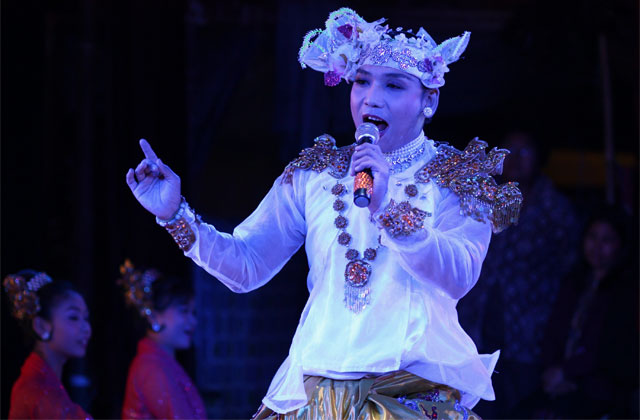 An evening of zat pwe presents a panoply of music, song, dance, drama, and comedy — all led by a male stage star known as a mintha, like the one above. (Rachel Cooper)

After Burma fell to British rule in 1885, some royal court performers in Mandalay lost royal patronage, and began to join existing small zat thabin troupes who were performing jataka tales with two or three musicians. They would perform in an “earth circle” (myay waing), a cleared-out space in front of bullock carts that toured the countryside performing in villages and at pagoda fairs. The addition of the royal court puppeteers, musicians, and dancers to the existing country troupes added a level of expertise, repertoire and excitement. The performances evolved into a multi-discipline theater form with performers balancing many skills from the old marionette pwe: music, dancing, singing, clowning, and acting, with emphasis on Buddhist moral teachings. The inclusive nature of zat pwe styles continues to expand, shaped also by the expectations of today’s audiences, who keep up to date with the zat troupes through social media.

In the early 20th century — with more zat troupes touring Myanmar, and early 78 rpm song recordings popularizing zat performers — the allure of the most gifted mintha and his counterpart, the minthamee, together with talented comedians called lu shwin taw, were magnets for pre-film era audiences. After 1928, with the debut of Burma’s first film, both the zat pwe and smaller marionette troupes, yok thay, had to compete with the development of indoor cinema theaters in larger townships and cities.

The zat pwe renewed its popularity after the breakdown of public entertainment during WW II and Burmese Independence in 1948. Zat thabin troupes re-formed after the war and developed more traveling circuits in rural areas, cities and towns. Pagoda festivals in two cities — Mandalay and Bago — became centers for zat troupes to compete for attention. Zat thabin and the hsaing waing musicians, who brilliantly united disparate genres of dramatic performance, were championed and written about enthusiastically by Burmese writers, though occasionally cosmopolitan detractors criticized and dismissed zat pwe as being too “local” in cultural flavor.

Zat thabin’s greatest advocate and dancer after World War II was Mintha Shwe Man Tin Maung, who started his own troupe, Shwe Man Thabin, in 1933. He brought international recognition and accolades to the music and dance of the zat pwe. His expansion of the final number in a zat pwe, the hna ba thwa became legendary, and the technical prowess of his dancers was the standout. Through his travels and exposure to international dance styles — for example, his seeing the Martha Graham Company’s 1955 tour to Burma — he presented innovative choreography and directed new plays for each Shwe Man Thabin season. His genius was to combine classical forms with more spontaneous improvised movement, dialogue and socially relevant topics. He created a music dance-drama for zat pwe that became a vehicle both for the jataka tales and other Buddhist teachings, with dramatizations from Burmese history set to music and dance. Each production featured stagecraft new to Burmese audiences of the era. On a U.S. State Department-sponsored visit to the United States in 1957, he saw several Broadway musicals, inspiring his development of the zat thabin “Awpara” (Opera), a beloved and integral element of a night’s zat pwe.4

He also made great efforts to bridge the wide chasm in geographic and economic backgrounds of his audiences. He was well aware of the emerging urban middle-class contempt for zat pwe, as they were eager to embrace western art, drama and music. Particularly as more movie theaters opened, he was constantly challenged to modernize and revitalize the zat pwe. “I will work until I die to show the middle class that zat thabin is relevant.”5 In 1969, at the age of 50, while dancing with two of his sons in supporting roles, Shwe Man Tin Maung died on stage during the hna ba thwa, the final two-hour segment of the zat pwe, where minthas dance, sing, and declaim their virtues in improvised dialogue with the minthamee and clowns through the frame of Buddhist teachings on devotion. 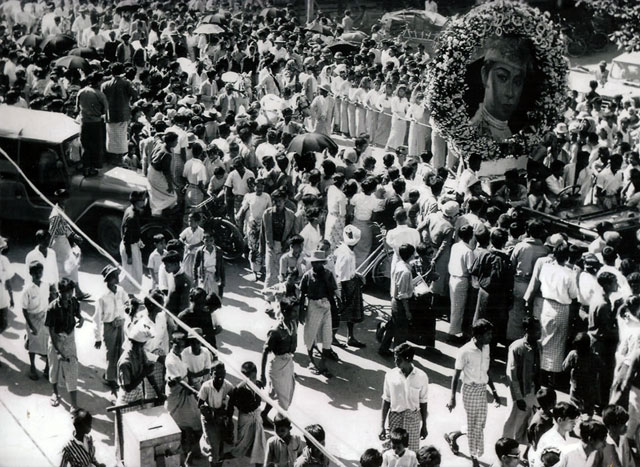 From the 1970s onward, local and regional military authorities issued directives and restrictions on the mobility and programming of zat thabin troupes as various insurgencies (particularly in the Mon, Kayin, Kayah, Shan, Kachin, and Chin states) gained ground in the countryside. Permissions for zat thabin companies to travel to these areas became increasingly difficult and many troupes disbanded. After 1988 with the suppression of democracy protests in the cities, zat troupes were prohibited from performing in urban areas under a law from British colonial times invoked by the military government selectively banning entertainment which attracts large audiences.

In 2011, Myanmar began to transition from a military regime to a more democratic society. Since 2012, the Myanmar government gradually loosened restrictions on which areas zat thabin troupes can perform in, and what they can program. This loosening has occasioned a revival of interest in talented minthas who have extensive training in classical Burmese dance, who can also incorporate new influences such as breakdance and hip-hop. The hsaing waing ensemble is complemented by another ensemble — a contemporary pop band sitting at the opposite side of the stage. This characteristic ability of zat performers to integrate the traditional with the contemporary in Burmese culture encourages younger urban audiences to attend zat pwe and experience new pride in this hybridization of styles and continually transforming nature.

In addition to Shwe Man Thabin, the few zat thabin troupes remaining in Myanmar today — Po Chit, Win Naung, and others — continue to travel to Buddhist temple festivals in villages and remote areas to perform three-night shows from September until April, before the monsoon rains. Dancers, clowns and musicians are trained at the University of Culture in Yangon and School of the Arts in Mandalay, but weak funding and dim prospects for employment in these fields discourage younger people from studying traditional Myanmar performing arts.

When Shwe Man Thabin travels to rural areas, eager and loyal audiences await them. Their audiences are comprised of families with small children, retired elders, off-duty soldiers, school-teachers, farmers, township administrators, local merchants, factory workers, young monks, and students, who all crowd into an open area laid with woven mats on the ground in front of a hastily, but solidly built stage. The phenomenal abilities of the Shwe Man Thabin troupe, descendants of Shwe Man Tin Maung, with their ever-changing dances, plays, songs, stage effects, over the course of a night excite and delight a mix of tastes and imaginations. 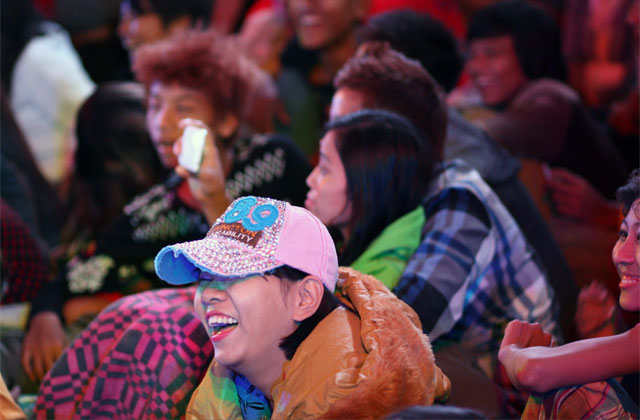