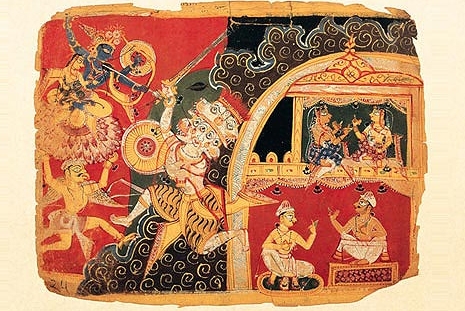 The painting technique used was simple, consisting of opaque watercolor on paper. The artist began by laying out the composition with charcoal or thin black ink applied with either a brush or pen. The paper may have been burnished beforehand. A thin ground—a layer of opaque watercolor—was brushed over the under-drawing. This layer—which might be white or tinted yellow or blue—covered the paper, but was translucent enough to reveal the under-drawing beneath. Different colored grounds could be used to define major areas of the composition. Another under-drawing, generally red or black and done with brush in thin watercolor, was drawn on the ground.

At this stage, the painting was usually burnished by being placed face down on a smooth slab of stone. The back of the paper was rubbed with a smooth stone, inset into a wooden holder. Burnishing was repeated frequently during the painting process. The practice of burnishing gave a smooth surface to the painting. Near the end of the process, the painted side might be rubbed using a smaller burnisher to produce local glossy areas.

Further layers of paint were added to the ground with artists working from larger to smaller areas of color and from more diffuse to more detail. The final areas were often the more important compositional elements, like human figures, or the lions and tigers of the hunting scenes. Towards the end of the process, final outlining, usually in black, of the design elements was done.

Materials
The paper used was of two types. One, a thin, smooth, whitish paper was prepared from fine off-white paper pulp. The other, a rougher buff paper, was made from fibrous, brownish, nonuniform paper pulp. The practice of burnishing resulted in a smoorth surface to the finished work. Cloth was used for larger sized works.

Recent research into the types of pigments has uncovered the following information. Several types of whites were found, all metallic and including lead white (found in the majority of paintings), tin white, and zinc white. Lampblack was the only black identified. Brilliant yellow, called Indian yellow (a calcium or magnesium salt of euzanthic acid), as an organic extract from cow urine. Vegetable dyestuff indigo was the more common blue. Natural ultramarine (the mineral lazarite) was also used. Vermilion (mercuric sulphide) and red lead were the most common reds. Many greens were used. The most common was verdigris, copper chloride produced by the reaction of copper metal with salt water. Metallic pigments were also used, including gold in painted powder form, and a tin metal that was silver in color. Binders, the solution into which pigments are mixed so that they might be spread, were gums—gum Arabic and gum tragacanth.

Methods
Artists sat on the floor working on boards or low tables.

Preservation and Storage of works
Paintings were kept in the palace in a dry picture storeroom, piled on stone shelves. They were usually wrapped in cotton bandanas to protect them from insects, dampness, and light. Bundles were arranged by topic and size.

The Artist
Although we know the names of artists who worked at the Mughal Courts, many of the artists who produced Rajput paintings remain anonymous to us. Inscriptions and more recently advanced research have identified some of these artists. Stylistic evidence tells us that painting techniques, materials, and artists all traveled throughout the region. The political alliances and military campaigns of the region assured cross-fertilization between Mughal and Rajput styles and techniques.

Apprenticeship to a master artist usually began at a young age. Court workshops houses artists. Artists' wages were roughly equivalent to that of soldiers, and they might receive bonuses for outstanding work. Artists traveled with rulers to war, hunts, and festivals.