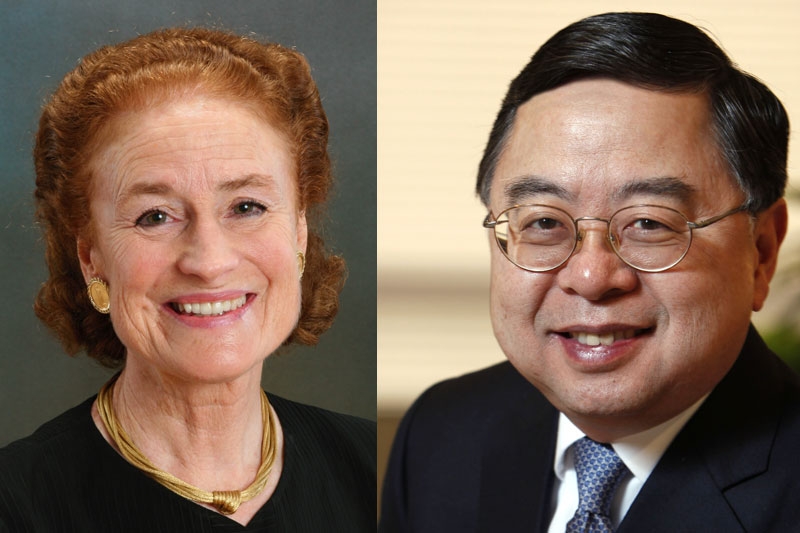 NEW YORK, May 22, 2011 — Asia Society, the leading international organization creating understanding and connections among the peoples of Asia and the United States, has appointed its first ever Co-Chairs on both sides of the Pacific Ocean to reflect the rise of global interdependence and growing regional partnerships.

Business leader Henrietta Holsman Fore, a former senior U.S. Government official who served as the first female chief of the U.S. Agency for International Development (USAID), and Ronnie C. Chan, one of Hong Kong's and China's top property developers, investors and philanthropists, will assume joint leadership of the Asia Society Board of Trustees, effective June 10, the Board announced in New York on May 22, 2011.

As well as being Asia Society's first Co-Chairs in Asia and the United States, Ms. Fore is the first woman, and Mr. Chan the first Asian, to lead the Board since the institution was founded by John D. Rockefeller 3rd in 1956.

"We are entering an era in which the global center of gravity is shifting toward the fast-growing economies and countries of Asia," Ms. Fore said. "Asia Society is thinking creatively about how to adapt and grow as the 21st century’s most important relationship finds a new balance."

Ms. Fore and Mr. Chan have been friends and colleagues for more than 20 years through their association with Asia Society. They regard their dual appointments as being critical to the Asia Society’s mission of preparing Asians and Americans for a shared future.

"Asia Society is one of the first organizations of its kind, if not the very first, to create an internal structure that recognizes the true partnership between the two sides of the Pacific Ocean," said Mr. Chan. "The institution's focus covers more than 50 countries and territories. It is imperative that we understand and connect peoples and cultures so political and economic cooperation can deepen." Asia Society President Vishakha N. Desai said the institution would pursue new directions and set new priorities in the context of key global trends.

"With their extensive experience and broad knowledge, our Co-Chairs in Asia and the United States will guide our work to create truly global partnerships based on mutual respect and understanding across cultures, disciplines, borders, and continents," Dr. Desai said.

The creation of a joint chairmanship is the latest in a series of milestone changes for Asia Society as it implements its ambitious expansion plan. The organization is also building new multimillion dollar centers with museum and public programming facilities in Hong Kong and Houston, complementing the renowned cultural and thought leadership role of its New York headquarters.

"It has been an honor and a pleasure to serve as Chair of the Asia Society these past three years, during which time we worked to further the mission of this organization to promote understanding among the people, leaders, and institutions of the Asia and the United States," said Mr. Kaye, who will continue to serve as a Trustee. "I am delighted to welcome Ms. Fore and Mr. Chan to this role, both of whom have been great supporters of Asia Society and have been intimately involved with its work to date."

Ms. Fore served on the Board in the early 1990s in between periods of U.S. Government service. She returned to the Board in 2009 and served on its Executive Committee. In 2010, she was Co-Chair of an Asia Society Task Force Report, which called for greater U.S. and international engagement with Burma/Myanmar.

Mr. Chan has been Chairman of Asia Society’s Hong Kong Center for more than a decade and has been Vice Chair of its Board since 1998.

Asia Society is the leading global and pan-Asian organization working to strengthen relationships and promote understanding among the people, leaders and institutions of Asia and the United States. The Society seeks to increase knowledge and enhance dialogue, encourage creative expression, and generate new ideas across the fields of arts and culture, policy and business, and education. Founded in 1956, Asia Society is a nonpartisan, nonprofit educational institution with offices in Hong Kong, Houston, Los Angeles, Manila, Melbourne, Mumbai, New York, San Francisco, Seoul, Shanghai, and Washington, D.C.

Ms. Fore is Chairman and CEO of Holsman International, an investment and management company involved in U.S. and international business. From 2007 to 2009, Ms. Fore served as Administrator of the U.S. Agency for International Development (USAID) and Director of U.S. Foreign Assistance, holding the equivalent rank as Deputy Secretary of State. Between 2005 and 2007 she served as Undersecretary of State for Management, the Chief Operating Officer. Prior to this she served as the thirty-seventh Director of the U.S. Mint in the Department of Treasury from August 2001 to August 2005. She received the Distinguished Service Award in 2009, the highest award the Secretary of State can bestow, and the Alexander Hamilton Award in 2005. Between 1989 and 1992, she was Assistant Administrator for Asia and for Asia and Private Enterprise and served as the Founding Chair of the US-Asia Environmental Partnership announced in Singapore by President George H.W. Bush.

Mr. Chan is the Chairman of Hang Lung Group Limited and its subsidiary, Hang Lung Properties Limited. Both are publicly listed companies in Hong Kong, dealing in real estate investment, development and management. Founded in 1960, it expanded into mainland China in 1992. Following successes in Shanghai, from 2005 to 2009 Hang Lung has been investing US$5 billion and building commercial complexes in several Chinese cities, including Tianjin, Shenyang, Jinan, Wuxi and Dalian. Mr. Chan also co-founded the privately held Morningside group which, in the past two decades, has owned and managed businesses in manufacturing, public transport operations, outdoor advertising, media, healthcare, online game operators, high-tech and biotech investments, developmental capital investments and other venture capital investments around the world. In addition, Mr. Chan is actively involved with many non-profits, philanthropic endeavors, and educational organizations.

The press release is attached below.