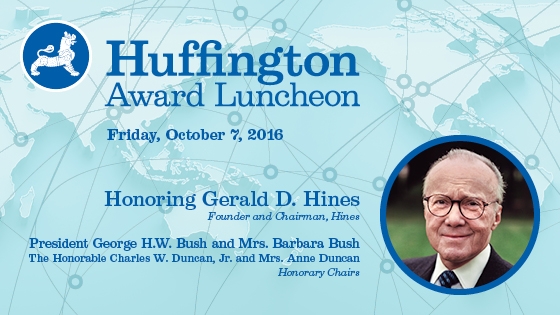 Named for the Houston oilman and former ambassador who played a leading role in creating the Texas Center, the Huffington Award is the highest honor bestowed by the Asia Society Texas Center.

“Asia Society is thrilled to honor Mr. Hines as our 2016 Huffington recipient,” said Bonna Kol, executive director of Asia Society Texas Center. “Throughout his 60-year career, he has been a major force internationally, building a legacy of successful partnerships in real estate investments.”

Mr. Hines founded the real estate investment and development firm that bears his name in 1957 and remains its chairman. His presence is felt across the globe in 182 cities in 20 countries. Over the past half-century, he has earned an international reputation for quality projects that are also sound financial investments. I.M. Pei, Cesar Pelli, and Philip Johnson are among the world-famous architects he has collaborated with.

In Houston, two projects Mr. Hines launched in the mid-1960s put him on the international map. On open prairie in the western part of the city, he built The Galleria, a multi-level indoor mall that featured an ice-skating rink. Downtown, he built One Shell Tower, the world's tallest reinforced concrete structure when it was completed.

Other iconic Houston buildings followed. Pennzoil Place, designed by Philip Johnson and John Burgee, was completed in 1975. Consisting of two, 36-story trapezoidal towers sheathed in dark glass, it launched the post-modern era in skyscraper design and remains among the most distinctive components of the Houston skyline.

“Gerald Hines put us on the map in terms of great buildings,” Barrie Scardino, executive director of the local chapter of the American Institute of Architects, said in a 2007 profile of Hines in the Houston Chronicle. “Architecturally, Houston would be pretty poverty-stricken without him.”

Across the globe, in Asia, Hines has been active in China since 1995, with projects that include office towers in Shanghai and Beijing. Hines has also done major buildings in Australia and India. The company is even more heavily invested in Europe, with offices in 12 cities across the breadth of the continent and a portfolio of prominent office, retail, industrial and residential properties.

Mr. Hines was born in Gary, Indiana, and graduated from Purdue University with a BS in mechanical engineering. He moved to Houston in 1948. He is a frequent guest lecturer at major universities and a sought-after speaker at industry events.

Among Mr. Hines’ proudest accomplishments are the support of the Gerald D. Hines College of Architecture at the University of Houston and the establishment of the ULI/Gerald D. Hines Student Urban Design Competition.

Former recipients of the Huffington Award include President George H.W. Bush and First Lady Barbara Bush, who are serving as honorary co-chairs for this year’s luncheon along with Mr. Charles and Mrs. Anne Duncan.

The Huffington award will be presented at an October 7, 2016 luncheon at the Hilton Americas-Houston. Television journalist Melanie Lawson with ABC (KTRK-TV) in Houston, will serve as emcee.